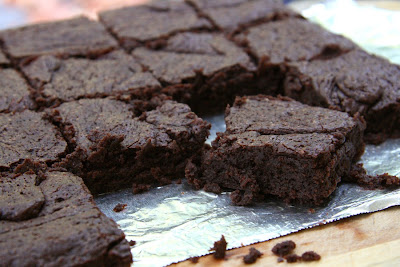 One thing I'm glad I did when my two daughters were young was to cook and bake with them. From the time the girls could stand next to me on a stool in the kitchen, they got to measure, pour, and stir ingredients, not to mention licking the spoon and the bowl. I can't say I had them join me in the kitchen from any conscious life plan, but it has played out beautifully. Each of the girls is culinarily confident and more than competent.

My older daughter, ALE, chronicles her domestic adventures on her blog Friends and Hammers - she bakes marvelous bread and I can never get enough of her homemade jams. My younger daughter, JDE, is the one who started me on the Tuesdays With Dorie path more than three years ago, and she is equally talented in preparing savory or sweet dishes. So when she heads into the kitchen, I know we are in for a treat!

Case in point: JDE came into the kitchen on one recent morning and offered to bake something. What luck! I pointed her to this week's TWD assignment, Classic Brownies, and she took it from there.

- These brownies were chosen by Anne, of the blog Anne Strawberry. Her post has the recipe and four different brownie variations, too!

- Dorie's recipe calls for walnuts in the brownies, but these were baked by my daughter, and when the baker doesn't want nuts, the brownies don't get nuts.

- We were planning to make a half batch, but when we saw the relatively modest quantity of ingredients and the 8-inch pan, we opted for a full batch. I'm glad we did; they are not super tall brownies. If you're planning to feed several people, I'd definitely double the recipe.

- As always, the trusty King Arthur Flour Divot Test proved that the brownies were perfectly done. 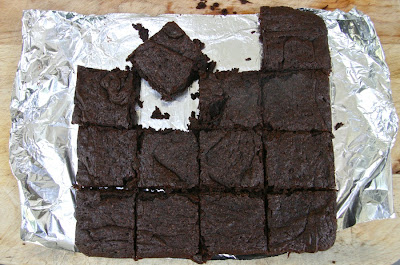 These brownies are chocolatey and rich. They were not not quite as fudgy as I like, but I'm pretty sure that an overnight stint in the fridge would remedy that. As it turned out, we scarfed down just a few of these, and popped the rest in the freezer. I'm guessing that they will be denser and fudgier after they thaw. While these are not my very favorite brownies (that honor goes to these or these) they were a solid, classic, brownie, sure to please folks on most parts of the brownie-loving spectrum. And the best part? Not only did JDE bake these and share them with me, she left my kitchen spotless after baking!
Posted by Nancy/n.o.e at 9:59 PM

B & G like to help, now I just have to wait for them to get big enough to wash dishes! =) I agree, these won't displace the Essence brownies as my favorite, but they were very good. (Oh, and we put chocolate chips in place of the nuts.)

I love when my daughters come to visit, all 3 are great cooks. I'm treated to one feast after another. Love my daughters. Noe I need to go back and check out your favorite brownies.
Have a great day.

Nice to have a baker who cleans up after herself! I'll have to remember the divot test. Lovely brownies!

Freshly baked brownies and a clean kitchen? I'd say you made out pretty well in this deal :) They look great!

My mom taught me to love to cook too and I'm grateful as I'm sure your daughters are! Your brownies look perfect and I loved checking the other posts (seems you can't have too many brownies or brownie recipes to try, I've added many to my 'to bake' list this week!) The KAF post with the divot test was great too. Thanks for sharing!

How nice to have your TWD recipe baked for you, they look great! I agree that you should double the recipe if you're feeding more than a few - they lasted less than 3 days at my house and there are only two of us.

Ewww...these are really chocolatey, aren't they?? Here's my test for brownies: "Okay, guys, it says you need to bake for 35 minutes..." timer rings, "Okay, guys, time's up, everyone out!" Cool, cut into squares, serve those guys to my guys who really don't care a hoot at the apparent done-ness or lack thereof and will eat anything chocolate. That's why I like Dorie...I trust her to know and I don't have to give it another thought! lol

Well, my weeks are completely mixed up. Thought these were next week but they are really for the NEXT week. Ah well. made them today.

Anxious to try them. No helper for me.