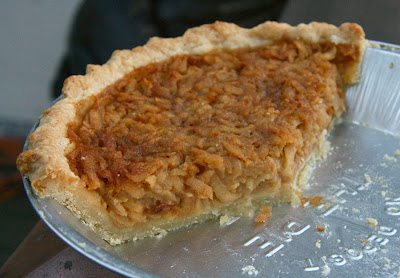 Around the beginning of February I heard a rumor that February is National Pie Month. [translation: I read it on the internet somewhere, but now I can't find a reliable citation.] Any excuse is a good excuse to eat pie, so I baked about half a dozen pies this month. I need to hurry if I want to share a pie with you before the month is out. So without further ado, I present a very special apple pie.

I stumbled on this recipe quite by accident when I was baking some bread from a James Beard recipe on the James Beard Foundation website. My eyes strayed to a box on the sidebar featuring two pies: New England Boiled Cider Pie and Shaker Lemon Pie. They both sounded absolutely delicious, but the cider pie was especially perfect because I have such an excess of farm box apples and also a bottle of boiled cider in the refrigerator (but I have since baked a version of the lemon pie too.)

- Richard Sax created this pie and you can find the recipe on the James Beard Foundation website, here.
- I made half a recipe and baked it in my 7" pie pan.

- The recipe calls for boiled cider, either prepared or homemade, giving directions for boiling 2 cups of apple cider until it is reduced to 2/3 cup. I used the boiled apple cider from King Arthur Flour. I have really enjoyed adding this concentrated cider to apple desserts to increase their apple-y goodness. In fact, my bottle is nearly empty!

- There's also a solid dose of lemon juice in the pie filling. I splashed in a bit extra because my apples weren't as tart as Granny Smiths.

This pie was packed with intense apple flavor. Whipped cream provided a mellow counterpoint to the sharpness of the tart apple and lemon/cider custard. This pie was such a hit that we pretty much fought over the last piece!
Posted by Nancy/n.o.e at 9:52 PM

I'm sold! And no question, I'm adding boiled cider to my next KAF order. =) Plus I still haven't used my mini pie plate.

I'm bookmarking this one for next fall. It's right up my alley :) I just need to remember to order some of the KAF boiled cider before then...

I have boiled cider from KAF too but I keep wasting it on apple muffin recipes...hmm....

I've always wondered about that stuff (I love cider!) We had snow yesterday (just a little) so it still feels like cider weather around here too.

I am with everyone else and would love to boost the flavour of apple pie!!

That looks delicious, Nancy! We are big apple pie lovers here...will have to try this.

I boiled down the cider and that was fine...but am thinking I would now like to get the KAF version so I can compare before I forget how the boiled down cider tasted. Thanks for encouraging me to make this, apple pie is always a favorite and this was a really good one. And, yes, they had the whipped cream with it, of course.