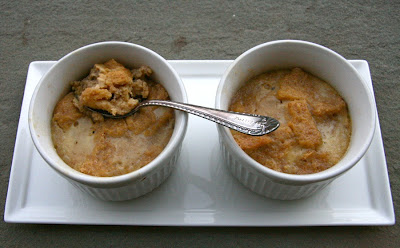 In the past couple of years of blogging about baked goods, I've learned a few things about bread pudding. One, people either love it or despise it. Two, most people fall in the "despise it" camp. It's either too eggy, or too soggy, or both. Three, the people who despise bread pudding are pretty much never going to change their opinion to a positive one.

And here's a fourth thing I've learned: it nearly impossible to photograph bread pudding so that it looks appetizing, even to those who do like it, but especially to those who don't.

We like bread pudding, a lot actually, so I was happy to make this week's Tuesdays With Dorie recipe, Bourbon Bread Pudding. When I was finished, it didn't look very pretty - bread puddings are never going to win any beauty contests. Because I was seriously short on daylight, and it was time for us to eat the bread pudding, I didn't garnish or decorate before snapping the picture. It might have helped the looks of the pudding but I doubt it would have won over any hearts and minds to the pro-bread pudding camp.

- Sharon of the blog Simply Southern chose the bread pudding this week, and you can click over to her blog post to find the recipe.

- I made a quarter recipe in two individual ramekins. The ingredients divided quite easily except for the eggs - I needed 1 egg + 1 yolk. I solved the problem by using a huge duck egg (75 grams) from my farm box. Duck eggs tend to have very large yolks in relation to the amount of egg white, so I figured it would be perfect.

- My fridge had a perfect-in-size (2 ounce) piece of slightly old Milk Loaf. I further "staled" it in the oven, following Dorie's instructions. while the bread is getting stale and dry in the oven, it's quick business to make the custard, Then the custard is poured over the staled bread and the assembled puddings rest on the counter for an hour before baking, to allow the bread to soak up the liquid. That seemed like a very long time for my puddings; the bread got very soft as it soaked.

- There was only 1 teaspoon of bourbon in my quarter recipe. I gave the custard a tiny taste as I was mixing it up, and the bourbon was barely detectable, so I took a little chance and doubled the amount of bourbon.

We ate these puddings warm from the oven, and they were a welcome finish to a winter meal. They were not, however, my favorite bread pudding. The cubes of milk loaf nearly dissolved in the soaking and baking process, so the puddings turned out a little spongy. I prefer a more pronounced difference between the bread and the custard. If I were to use milk loaf again, I'd soak for a much shorter time before baking the pudding.

The flavor of the bread puddings was a bit bland. The bourbon was very subtle, even though I'd doubled the amount. Maybe tripling it would be a better idea? As it was, the stongest flavor was the cinnamon. I missed the texture and sweetness of dried fruit, which is not included in this recipe.
Posted by Nancy/n.o.e at 12:01 AM

I'm in the 'love it' category. Bread pudding is so comforting, and soft and delicious!!
Great presentation. Those little pots are great. Shame you didn't love it

I am loving the single serves. I couldn't taste the bourbon either.

I am in the despise category.

I didn't make it, but yours looks great.

I am in the "love" category as well.This is one of those desserts that just scream comfort.

I'll be honest because we are good friends and you know how I feel about bread pudding: this looks disgusting. lol I'm sure as bread puddings go, it is fine, but with me, not so much. I made a pie, big surprise, right, since this is National Pie Month and all.

Hahaha... Kayte's comment is making me laugh! That's what good friends are for, right?? I do love your little ramekins though!

I can eat it but just would rather use my calories on cookies or cake! It looks good to me!

Um...you aren't going to convert anyone to the pro-bread pudding camp with this photo....it is hard to photograph bread pudding (and anything brownish beige!) to make it look appealing....I am in the "Love B.Pudding" category and would eat it even if it didn't look good...great post :).

Love the minis. I think they look great. Thanks for baking along with me this week.

I don't know if bread pudding is the best use for heavy whipping cream!

I am in the 'I don't hate it, but I don't love or crave it either' camp as far as bread pudding goes. It just never occurs to me to make it, as I never have bread around. Anyway, I quartered the recipe too, but doubled the original amount of booze. it was good and boozy, but still not pretty.
:)

I'm definitely a bread pudding hater and I was starting to wonder if maybe this would have been the recipe to change my mind (after seeing positive reviews on quite a few sites). Your review, though, has me confident I made the right call to sit out :)

I am squarely in the "love it" camp, no matter how it looks. I do think the flavoring could have been amped up a bit in this recipe, but at the same time I think I needed something a bit bland this week. It fit the bill!

Add me to the list of those who LOVE bread pudding. Mine came out perfectly, but then my bread was beyond stale and needed lots of soak. Love the idea of the individual servings. Made mine loaf and was easy to slice and top.