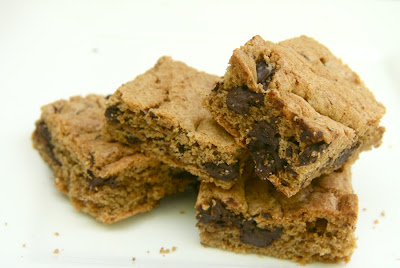 I've baked fancy blondies and I've baked plain blondies, but this week's recipe for the Tuesdays with Dorie baking group, the Peanuttiest Blondies, is the first peanut butter blondie recipe I've seen. I was intrigued by the promise of a chewy peanut butter bar with chocolate accents.

- Nicole of Bakeologie chose Peanuttiest Blondies on page 119. Find the recipe on her post.

- I made these according to the recipe with one exception: I left out the chopped peanuts. Additionally, I chose the smooth rather than the crunchy peanut butter option. Thus my blondies were definitely not "peanuttiest" but only "somewhat peanutty."

- For a pan I used a 9" silicone pan which I lined with parchment only on bottom. The blondies released perfectly.

- I found that testing these blondies for done-ness was tricky - but luckily mine turned out to be baked just about right.

The blondies were thick and chewy and just peanutty enough. I loved the bit of chocolate in them; it's such a natural combination with peanut butter. The next time I bake these, if I omit the nuts I would probably increase the salt. That is what my baking buddy Caitlin of the blog Engineerbaker (she's getting married this Saturday!) did with her blondies, and she reports that they were perfect that way.

I'm glad to add this recipe to my blondie repertory.
Posted by Nancy/n.o.e at 12:03 AM

Leaving out the peanuts is a great idea, and they certainly look like they weren't missed. I hate chopping peanuts with a passion, so I'd probably do it your way next time.

I used hazelnuts in mine and they were very tasty. Yours look great!

The blondies look great, but I'm still drooling over the praline tart!

I left the peanuts out too but they still seemed plenty peanutty. Yours look very tasty.

I think leaving out the peanuts is a really great idea, and I might try it if I made these again. Your blondies look seriously tasty, and, as always, your notes are great!

Any kind of nut could be used (or not) and these would still be tempting.

I liked the peanuts because the crunch was a good counterpoint to the chew. I just love blondies.

They look awesome Nancy. And you're right - you can't beat chocolate and peanut butter!

I left out the peanuts, too, but added PB chips in their place. I like the idea of increasing the salt; I'll have to try that next time.

Looks like lots of people skipped the peanuts, me included! I used mini pb cups, but if I hadn't I'd have subbed pb chips. I found these lacking a bit in pb flavor, but Shane loved them. Yours look wonderful with the chocolate - glad they were a hit!

I would use walnuts or pecans, next time so I understand why so many left out the peanuts.

This is a good recipe and I can see it being a standard in kitchens.

Yours are so attractive.

I opted for creamy too. Good note on the salt. I will try that. Perhaps with fleur de sel?

I left out the peanuts too. Just would have been too much peanut for me. I wish I had added some pecans to mine though. Will next time. Yours look delicious as always!

They look delicious! I loved this recipe.

Looks great...I nibbled around the chocolate areas and it tasted great as well...next time I am putting in peanut butter chips for those chocolate ones! Happy to hear you have a new addition to your blondie group...always nice to find a new recipe you like.

Drooling over those hunks of chocolate in your blondies!

These were pretty tasty. Hubs ate most but I did get a bite or two. Will prob make a third time.

I went all the way with the peanuts - good but still want to try them sans. Kind of like nuts in brownies (they just don't go together)! Nicely done!