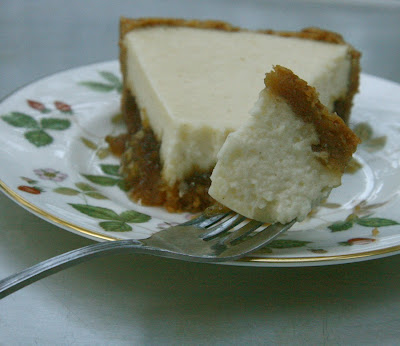 I jumped aboard the Tuesdays With Dorie train in its 30th week, and have baked every weekly choice since that time. While I have managed to keep current with the recipes chosen for the group, I have not made much progress in baking the recipes that I missed in the early weeks of the group. This week, however, the TWD bakers have a built-in catch-up day: we are free to bake any past recipe of our choosing.

Perusing the first 29 recipes on the "Completed Recipes" page of the TWD website quickly led me to the Hidden Berry Cream Cheese Torte: a slim cheesecake with a layer of jam or preserves between the crust and the cream cheese filling.

- This torte was chosen in the third week of the group. You can find the recipe on this post of our TWD founder Laurie of the blog Slush.

- This recipe is fairly easy to put together; first you make the crust in the food processor, then use the food processor to make the filling from cream cheese and cottage cheese. It ends up beautifully smooth, and much more pourable than regular cheesecake filling.

- I have jams for nearly every occasion, so it took me a while figure out which type to select for the torte. It finally occurred to me to use some fig preserves, as I'd recently stocked up on them, not realizing I already had some in the pantry. The biggest glitch in my plan is that my husband has a spotty relationship with figs. He generally dislikes the taste of figs, but he has been known to enjoy some dishes that contain fig preserves.

- I spiced up the preserves by adding powdered ginger, nutmeg, cloves and black pepper. Both Laurie and my buddy Leslie mentioned that the amount of jam in the original recipe was barel perceptible in the finished torte, so I increased the jam layer, adding probably 3 times as much as the recipe called for. Fig is fairly subtle and I wanted to make sure it was noticeable. Oh, and from an aesthetic perspective, a different flavor/color of jam would have been more attractive; the color of the fig preserves blended with the color of the crust.

- Dorie calls for some cinnamon and nutmeg in the cheese filling and I added a pinch of ginger as well.

- Leslie also passed on some baking hints, so I tented my torte with aluminum foil for the entire time that it was in the oven, and it turned out creamy and perfectly baked. 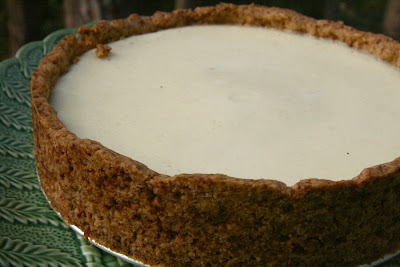 I was in a bit of a rush to get the torte photographed while it was still daylight, so I cut it before it had full cooled. The jam layer was just a bit oozy After taking pictures I then - of course - had to taste the torte while it was still slightly warm. I loved the flavors and textures of this torte: the spicy jam with a lush creamy filling and sweet crunch of a cookie-like crust. I later found that the torte was also good chilled And at room temperature, for that matter.

Despite my efforts to spice up the fig preserves, this torte fell squarely in my husband's "dislike" camp; the fig flavor ruined it for him. I was left with an entire torte and without my trusty sweets-consumer to help me. I forced fed offered the pie to friends of my daughter. They were very polite; each tasting a tiny sliver, and murmering their approval. One even said that she doesn't like cheesecake and liked this.

The ginger I added to the jam and the filling turned out to be quite popular with my tasters. My daughter said it tasted like "pie spices" - exactly! What do you expect when you bake a torte in Thanksgiving week?
Posted by Nancy/n.o.e at 11:25 PM

Bummer your hubby didn't care for it but nice the girls did! I think it looks lovely! This was a fun week to see what everyone selected to bake!
Happy Thanksgiving!

Jams for Every Occasion...yes, that's you!!! I, on the other hand, always have to run out and buy jam in a hurry...I must get more organized in the jam category. Your torte looks so beautiful. It was fun baking with you on this...and thanks for picking it as I would have been lost without your idea! Happy Thanksgiving!

That looks great! I wouldn't have thought to go with fig for the fruit. I really need to make this one, maybe for the Christmas rewind.

Your torte is beautiful. I loved the way the crust rised above the torte. I bet it was delicious. Too bad the hubs didn't care for. More for you and Dau!! Wonder if it would freeze??

Sounds so yummy! I still haven't gotten to this one.