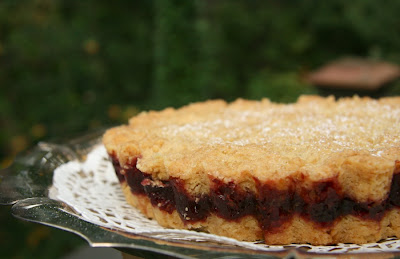 After nearly two and a half years of baking weekly from Dorie Greenspan's book Baking From My Home to Yours, one would think - really, one would know by now - that the book is filled with surprises. There are the recipes that sound improbable but turn out to be wonderful. And then there are recipes that somehow escape notice, even though I have read and re-read the book, have gone through it page-by-page, and have studied both the table of contents and the index. This week's recipe for the baking group Tuesdays With Dorie is one of those sleepers. Until my very good baking buddy Jessica, of Singleton in the Kitchen, chose the Not-Just-For-Thanksgiving Cranberry Shortbread Cake I didn't even know it was in the book.

- Jessica will have the recipe on her site today.

- This is one of those fabulously versatile recipes; it is two layers of buttery shortbread-like cake, with a filling of cranberry "jam" that can be whipped up on the stove top in minutes. But the cake filling could also varied to suit the season or your mood; so it could be sauteed cinnamon apples, or any kind of jam that you fancy and/or have in the pantry. I was excited to make the first cranberry dessert of the season, so I went that route.

- In making the filling, I used the minimum amount of sugar Dorie specified, since she said to add more if it was too tart. But even with the smallest amount of sugar the filling was too sweet for me, so I added some lime juice, which helped, although it was still on the sweet side.

- I made 2/3 recipe in fluted deep tart pan rather than a springform pan. I didn't roll the dough quite big enough for the pan, so ended up spreading the dough with my fingers. I was worried that it would look patched and rough, but as it baked the cake rose and filled in all the little gaps in the dough. A little powdered sugar on top when it was cool and none the wiser!

- It was difficult for me to gauge the done-ness of the cake. The knife was fairly clean from early on in the baking time. I ended up waiting for the cake to be golden on top but at the same time not look dried out. 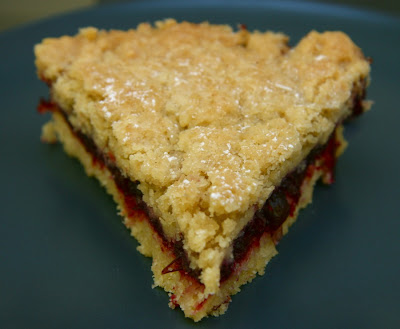 There was a split of opinion when I served this this cake. Not on the general merits of the recipe; everyone who ate the cake loved it. The real question was whether the cranberry jam filling was tart enough. One of my tasters, JT, and I thought "no, too sweet," daughter JDE, through puckered mouth, said it was plenty tart, thank you. Hubs was so busy helping himself to a third piece that he wasn't quibbling over the finer points.

The shortbread layers were wonderful, buttery, and just sweet enough. The cranberry jam was fun to make, and provided a nice tart counterpoint to the sweetness of the cake.

If you are not wed to pie on Thanksgiving (we definitely are) then this would be a great addition to the dessert table. It is absolutely festive in appearance, and wonderfully seasonal in flavor.

As for me, I plan to serve this as part of our Christmas celebration, probably with the beautiful red cranberry jam again. I also am dying to try some other versions of this cake, using different flavors of jam. I'm most excited about the prospect of using citrus marmalade; I think it will be the perfect sweet/tart combination. 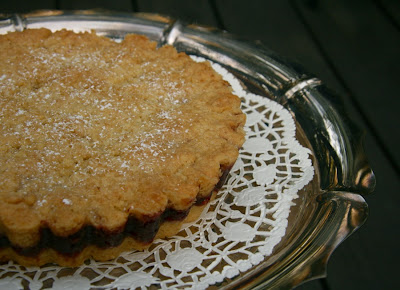 Looks wonderful! I agree, no matter how many times I read Dorie's book I always find something I hadn't noticed before. It is full of hidden gems!

There are so many recipes in that book that I would never have noticed! Nancy, this was a sweet cake to me, but hubby thought it was just right. Your cake looks fabulous. The lime sounds good in it.

How fun to pick a recipe that you hadn't noticed before! It sounds like you had the same variety of tasting opinions that I had with the cranberry filling. We're fully wedded to pie at Thanksgiving around here but I think I've won the campaign for TG desserts so I might try to sneak this on the table. I'm so glad that you and your family enjoyed this dessert. Your cake looks gorgeous! Thank you for baking along with me this week!

I love the fluted edges...this loos like something you'd see in a Swiss pastry shop! (Not with the cranberries, though..)

I made mine with apples, but next time I'm going to use strawberry jam.

I like how yours looks from the tart pan--very pretty. I'd never noticed this one either.

This sounds like it will be my Thanksgiving dessert. Can't wait to try it. I will follow your advise and will add even less sugar as I find more cakes way too sweet.

I love that first photo, with the thick ribbon of jam around the edges. I agree about finding the hidden treasures in the book, no matter how many times you look through it.
:)

Oh, I much prefer the look of your cake with the fluted edges Nancy - gorgeous! I thought it was a bit plain in the springform. I hadn't noticed this one either, but so glad I have it now. In fact, it may be a repeat this week :)

I love the fluted edges on your cake! It looks beautiful. When I make this again I will have to think about using a fluted pan.

Dorie can do anything. Do you think she sneaks these recipes in, to fool us?

I agree with you, it is easy to mix some of the best recipes. I have gone through the book, page by page and find something new, each time.

Nancy,
i love the "fancy fluted fringe?" So Festive! Seriously, cute. I am so happy to see a surprise recipe too. Lovely!
AmyRuth

Oh, Christmas, yes, I was thinking Thanksgiving, but now that you mention it, Christmas would be great! Yours looks very elegant and rustic at the same time...a true test of a great baker! LOL on J's third piece. You see that piece on my blog...that was not a guy's piece like I usually feature, no, no, that was MINE...YIKES I can't be making this too often, it was too good. Top 5. (I said that to make you laugh, because you and I both know I have about 20 Top 5 picks.)

now i want to get a deep fluted pan :)
Oh, I'm so easily swayed by baking trays. looks gREAT!

This is probably one of the most flexible desserts in D's book. Wanna try with cinnamon apples or pears, maybe a chocolate filling??

Love the flutes around the edge. Perfect.

looks like it baked up perfectly! i love a tart cranberry sauce, too, but am also wanting to experiment with other fillings for this...next time.

Wow - what a nice top! It's very crackly - I love that! Mine too extra time in the oven for some reason, and was gooey when I took it out. But it's definitely a keeper recipe - so glad you liked the filling!

Your cake is absolutely gorgeous! Love the fluted edge and the presentation on the doily (mental note to steal Nancy's presentation ideas when I serve this over the holidays). We LOVED this cake too! I'm with JDE, even though I added extra sugar (although I also added pith to my jam, which might have something to do with it) -- but don't get me wrong - I loved the cake. Oh, and I never noticed this in the book either. That book is such a treasure trove!

It's been interesting to see how people react to the tartness/sweetness of the filling. We all just loved it, and I only added a tablespoon extra sugar. This is definitely in the top 5 of holiday desserts!

So great to meet you last night!!

Your photos and entire blog are beautiful - I love home page photo :)

Thanks for posting the notes to this recipe...not too sweet. I will have to try it soon.

Your fluted pan makes this look so elegant (mine was decidedly rustic). I'm glad you all enjoyed this one - I think it would be a great way to use up leftover cranberry sauce post-holidays.