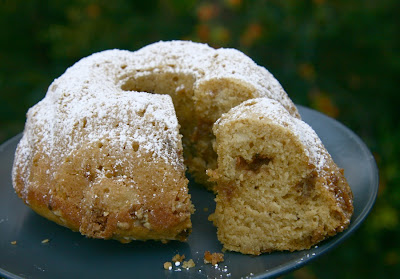 The first one was a failure. Not a spectacular, "I can't stand the taste" type of failure, nor an "I made a huge error baking this cake" failure. Even worse, it was a "ho hum" failure. Although (homemade) applesauce and autumnal spices went into the cake, it ended up with little detectable flavor. To add insult to injury, "even the texture is bland," in the words of my husband, who hit the nail right on the head. I didn't even bother to photograph that one.

The next cake - Apple Ginger Streusel Cake - was my choice for National Bundt Day, (which is today, November 15) so my fingers were crossed that this one would turn out well. Mary, of the blog The Food Librarian, is again marking the holiday by posting 30 bundts in 30 days, culminating today. I figured the least I could do was bake one cake. Food blog events with a once-a-year posting requirement are just about my speed!

When I choose a recipe for National Bundt Day, I look for one that's primarily intended to be baked in a bundt pan. It's true that most loaf cake and quick bread recipes can be doubled and baked in a bundt pan (and the reverse is always true; any bundt can be baked in two loaf pans) but for such an august occasion, I go for a true bundt recipe. Last year I baked a bundt with blackberry jam, which I posted here. For this year's I selected an apple coffee cake that is shown in bundt form, although the recipe says that it can be baked in other pan sizes. I bookmarked this recipe many months ago; National Bundt Day was the perfect excuse to try it out.

- The recipe for this cake is from Fine Cooking; you can find it here.

- The cake consists of a ginger-spiced buttermilk batter, into which crystallized ginger and apples are stirred, and a streusel which is layered in the middle and on the top (which becomes the bottom) of the batter in the pan. 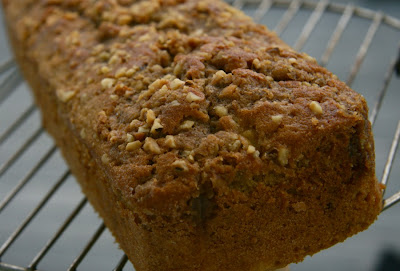 - I made a full recipe, but divided it into two different pans: a small metal bundt-ish pudding mold (that I only filled about half full) and a loaf pan. We kept the bundt cake at home and I brought the loaf to my buddy Audrey, who I finally met in person last week. If ever there was a lover of apple cakes, it's Audrey (I'm pretty sure that sentence is not grammatical, but I can't figure out how to fix it. If you have any ideas, let me know!)

- I was a little worried that the cake wouldn't deliver the spicy ginger-ness that I anticipated - and wanted. So I heaped the measure of dry ginger, and added about a teaspoon of freshly grated ginger to the batter. Erring on the side of too much spice is a good gamble for me; I've rarely met a spicy cake that I didn't like.

- Toasted walnuts give a much better flavor to bake goods than the plain ones, so I toasted mine in the oven before chopping them very finely for the streusel.

- I used a honeycrisp apple for this cake, since that's what I had. Because it wasn't a tart apple, I cut the sugar a bit to compensate.

- There wasn't a ton of streusel when compared to the amount of cake batter. By the time I divided it for the two layers, it was more dotted than continuous, so it didn't make a swirl as it baked; rather it became little balls of streusel randomly throughout the cake. Seeing as the bundt cake gets inverted when it comes out of the pan, the streusel that was on top of the batter became the bottom of the cake and totally lost any decorative value. On the other hand, the top of the loaf cake stayed the top once it was taken out of the pan, so the streusel looked very nice. Next time I bake this as a bundt cake, I'll add all of the streusel in the middle of the cake, rather than splitting it into two parts. I'd also consider increasing the amount of streusel.

- Since this is a coffee-cake it would be perfect for a brunch, or for Thanksgiving morning.

The first day, the cake had a lovely crunchy crust and a moist crumb. The ginger flavor was subtle but definitely present, and it made a pleasant underpinning for the apples. The next day the cake had softened considerably, and the flavors had married a bit more.

Audrey's cake was a day or two old by the time it was delivered and served. Nonetheless, Audrey and her tasters gave it favorable reviews: "I would say FANTASTIC combination of flavors."

I need more friends and strangers to share with to participate in making a bundt cake every day for a month, but I love her dedication and I would be willing to make one delicious, spicy bundt like this.

That looks fantastic! :) Glad you joined in this year!

What I liked second most about this cake was that flavor combination...it starts out on your palate has a nice moist apple cake and then there's a pleasant little zing from the ginger. Definitely not ho-hum!

What I liked most about this cake, of course, is that it was a gift (and a new recipe to treasure) from a thoughtful (and generous) friend! :)

I agree with Audrey's comment...everything tastes better when a friend made it for you! Nice work..I had no idea a bundt can be baked in two loaf pans..thanks for the tip.

This bundt sounds perfect for a holiday brunch - and I do love knowing that you can make smaller loaves (sometimes the bundt pan is too overwhelming). Very nicely done!

Mm... apple and ginger - two favorites, what a great combo. The cake looks fantastic, sorry about the first mishap, but glad the second bundt was a success! I always toast walnuts (they are on the verge of "ick" unless otherwise)! :) Great cake for a great day Nancy!

Ooh, something else new for me to try! Apples & ginger and streusel, mmm. I have so many recipes from Fine Cooking that I love.

I'm with Di - Fine Cooking is one of my favorite recipe sources. This cake sounds so good!! I knew you'd brought one for Audrey but I don't think I realized all the goodness that was in there.

This looks so delicious! I hate the ho-hum failures, too, but it looks like the second one more than made up for it!

Lovely lovely Bundt! I'm sending buttons and doing this massive round up. There is a lot of bundt love in the world! :) - mary the food librarian