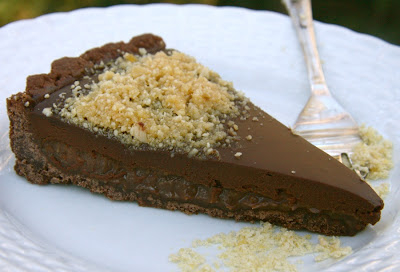 I found today's recipe thanks to one of my far-flung Twitter contacts, Gourmet Traveller an Australian magazine. Reading the the tweets from @GourmetTweets provides an interesting global experience because the seasons in Australia are exactly opposite those of my part of the world (the American South being the Northern Hemisphere and all) so the magazine touts hearty comforting food when I'm craving cool salads during a summer heat wave, and it features refreshing fare when I'm thinking of a bowl of something toasty and warm. (Recent recipe tweets have been for lamb and strawberries as right now it's springtime in Australia.)

But that is, after all, what bookmarks are for, and I've marked plenty of recipes from the magazine's site. No matter if I need to wait 6 months for the appropriate season to roll around to my part of the world. Today's Triple Chocolate Praline Tart is one that came across my twitter stream a good long time ago and I've been waiting for the perfect time to share it.
Fortunately, chocolate has no season - although it does have a National Holiday here in the United States, today, October 28. And I cannot think of a more appropriate recipe to feature than a tart composed of three separate elements, each of them chocolate (chocolate tart crust, milk chocolate praline filling and dark chocolate ganache top layer)! For good measure, extra praline adds decorative pizzazz and a sweet crunch. 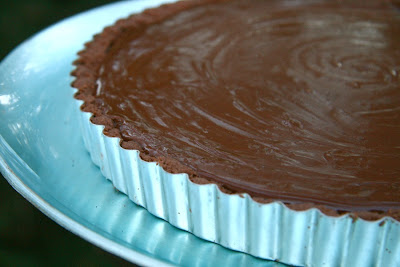 - The recipe, which you can find here, consists of three chocolate elements and a praline one.
- To make the praline, first you caramelize some nuts into a brittle, then pulverize it in a food processor. I used almonds instead of hazelnuts because I had just the right amount that were already blanched, and my hazelnuts all had skins. The thought of adding a blanching step was simply too daunting.
- Australian "pouring cream" (used in both of the ganache elements) is about 35% milkfat, a bit lighter than American heavy cream. In the old days (say, about 2 years ago) I might have tried to accurately calculate the fat percentages to get the same total amount as in the recipe, but this time I just winged it and used mostly heavy cream, along with some half-and-half.

- The recipe calls for a 28 cm tart pan, which converts to 11" by my calculations. I used my 9" tart pan and naturally ended up with an extra amount of each kind of ganache (although I wonder if I could have stretched the crust to cover a larger pan). Leftover ganache rarely goes to waste around here, though! I love having it in the freezer for those chocolate-topping emergencies.
- The good thing about a tart recipe like this is that each of the elements can be prepared well in advance of serving; in fact the finished tart can be assembled early, leaving no last-minute dessert preparations.
the verdict:

The tart proved to be very popular at a dinner party with my favorite tasters, my book group, who enjoyed its elegant slim appearance and strong hit of chocolate-upon-chocolate-upon-chocolate flavor.
Happy National Chocolate Day to those in the US, Happy Spring to those Down Under, and Happy October 28 to everyone else!
Posted by Nancy/n.o.e at 12:01 AM

I'm so glad you were finally able to share it - it looks beyond amazing! The texture looks so lush and indulgnent

Yum! Now this recipe is going on my bookmarked list. =) Sadly, I'm missing National Chocolate Day, at least as far as blogging goes. But maybe if I go eat some, I'll feel better in spite of this cold. =)

I just gotta believe that this would be a gigantic hit with my taste testers as well. Maybe I should give them the opportunity to say so for themselves, you think?

happy chocolate day-- this sounds wonderful! i became hooked on GT when we lived in sydney. it's the most beautiful cooking magazine out there,and with some very challenging recipes, i think. this is totally geeky, but i can easily pass a couple of hours getting caught up looking at stuff on their website.

I made Baked's Sweet and Salty brownies and Mexican Hot Chocolate Cookies for today (although I had no idea it was Chocolate Day)! Thanks for the reminder - and bookmark! What a beautiful tart - all three chocolate groups are represented quite well - I'm sure the taste test sent everyone into sugar shock (as it should)! :)

"Triple chocolate praline" may be the most beautiful combination of three words (well, "I love you" may have a slight edge). This looks and sounds to die for. I don't know how I let National Chocolate Day slip by...

THREE chocolate components. Be still my heart. This is definitely a must try. I will have to take a look-see at that site. If all the recipes look this good I am in serious trouble.

Always have choco ganache, toppings, bread dough in the freezer. may actually use some one day.....

Wow, that's a lot of chocolate! I can only imagine how rich it would be. If I eliminated the pralines Shane would be a huge fan I think!