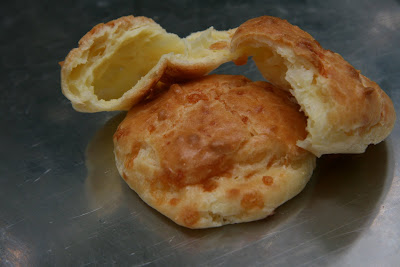 I am a huge fan of Dorie Greenspan, baker and cook extraordinaire. My first experience with her work was through her book Baking: From My Home to Yours, an almost-encyclopedic collection of beautifully written and presented recipes for baked goods. The Tuesdays With Dorie baking group was formed in early 2008 so that bakers could "bake through" the book; each week features a recipe chosen for the group by a different baker. I have been baking - and posting - delectable treats from that book every week for over two years, and eagerly await each new recipe.

Aside from the sheer deliciousness of the finished products, the most gratifying part of the book is the clarity of Dorie's voice coming through on each and every page. I begin working with a recipe and suddenly it is as if Dorie herself were in the kitchen with me, explaining each step. As a result, I've gained lots of confidence in the kitchen and a fierce loyalty to Dorie! So a few months ago when I heard that Dorie was writing a book about French home cooking, I placed an immediate pre-order with www.amazon.com. The new book is called new book Around My French Table and it's packed with delicious recipes, from the proverbial soup to nuts.
The same fine person (Laurie Woodward, of the blog slush) who started the Tuesdays with Dorie group has joined with a few other hardy souls to organize a group to cook through Around My French Table. Called French Fridays with Dorie the group is bigger and a bit looser. Cooks can come and go as the mood and the dish strike them. Dorie herself chose the recipes for the month of October, and bloggers around the globe have been busy in their kitchens and on their computers since October 1, the posting date for the first recipe, Gougeres. I actually made the gougeres on time but am just now getting to post them. 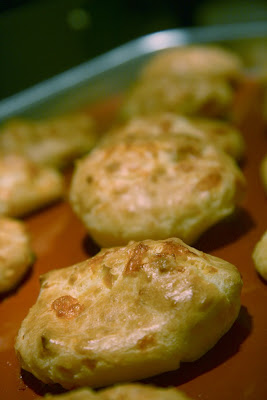 n.o.e.'s notes:
- We are not posting the recipes from the book, so if you want to make these yourself (and you should!), you'll have to pick up the book (I bought my book here.) To see how other FFwD cooks fared, you can find them here.

- I have been wanting to make gougeres since I saw them on David Lebovitz's blog. Had I only realized how simple they are to mix up and toss in the oven, I'd have made them before now. Gougeres are along the lines of cream puffs, but the dough has lots of grated cheese, so you end up with a puffy bit of bread lined with melty cheese.

- Dorie gives allowance to use various kinds of cheese in this recipe. I had Fiscalini San Joachim in my cheese drawer, so that's what I used.
- I measured my gougeres out with a cookie scoop, and they ended up pretty uniform in size and shape. Following Dorie's tip, I froze half of the batch unbaked and baked the other half of the dough balls.
- Despite a fair part of trepidation on my part, my gougeres did indeed puff in the oven - like magic!
the verdict:
I baked the gougeres when both of my daughters were home, and none of us could resist these cheesy puffs hot from the oven. A few made it to room temperature, and I can report that they are very good that way also. And every time I open my freezer, the sight of the frozen balls of cheese dough brings a smile to my lips...

I definitely want to 'rewind' to make these...they look wonderful. But then again, how could puffy bread and warm cheese not be? :)

You know, I still have some of the unbaked dough in the freezer! I think this group is going to be a lot of fun, and a great way to try some new things. I'm glad that you're a part of it. =)

I've been wanting to make these ever since I got the book, but still haven't gotten around to it. One of these days I'm going to remember to buy gruyere (my most favorite cheese) so I can whip these up. Yours look amazing and like Audrey said, you can't go wrong with cheese and pastry :)

I agree. These are fantastic!! And, so simple!

YUM, these were very good. I have tried them now with three different cheeses and each one is just delicious. Maybe I should stop by and raid your frig to have a taste of yours. Love the mental image of you and ALE and JDE sampling these out of the oven.