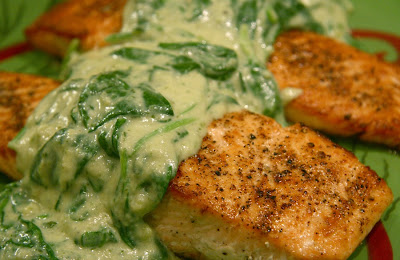 Although spinach is in the local grocery store on a year-round basis, when I think of Spring, I have images of baby spinach leaves. Now that Spring weather has finally arrived around here (it came for a few days last week before Summer's heat rudely pushed it out of the way) it's a perfect time for a lovely supper of Seared Salmon with Spinach and Creamy Roasted Peppers.

- I found this Rick Bayless recipe in his cookbook Mexican Everyday, which I bought at his restaurant Topolobampo when we visited Chicago a few months ago (The meal at Topolo was one of the best I've ever eaten). I've included the recipe at the end of this post, below.

- Bayless' directions are clear and precise, and his recipes' times and temperatures are always spot-on.

- I used a bit less spinach and it was fine.

- I happened to have 3 poblano peppers, so I roasted all of them. My sauce didn't seem very green with two peppers, so I threw in the third one. I think my peppers must have been on the smallish side.

This was a subtle and delicious way to eat salmon. The recipe is easy enough for a weekday (when we enjoyed it) and special enough for company.

1. Roast the poblanos over an open flame or 4 inches below a broiler, turning regularly until blistered and blackened all over, about 5 minutes for an open flame, 10 minutes for the broiler. Place in a bowl, cover with a kitchen towel, and let cool until handleable.

2. Place the spinach in a microwaveable bowl, cover it with plastic wrap, poke a few holes in the top and microwave on high (100%) until completely wilted, usually about 2 minutes. (If your spinach comes in a microwaveable bag, simply microwave it in the bag.) Uncover (or open the bag) and set aside.

3. Turn the oven on to its lowest setting. Heat the oil in a very large (12-inch) skillet, preferably nonstick, over medium. Add the garlic and cook, stirring regularly, until soft and lightly browned, about 4 minutes. Using a slotted spoon, scoop the garlic into a blender. Set the skillet aside.

4. Rub the blackened skin off the chiles and pull out the stems and seed pods. Rinse the chiles to remove bits of skin and seeds. Roughly chop and add to the blender, along with the masa harina and milk. Blend until smooth.

5. Return the skillet to medium-high heat. Sprinkle both sides of the fish liberally with salt and pepper. Lay the fillets in the hot oil and cook until richly browned, about 2 to 3 minutes. Use a spatula to flip the fillets, and cook until the fish barely flakes when pressed firmly with a finger or the back of a spoon (you want it slightly underdone), usually a couple of minutes longer for fish that's about 1 inch thick. Using the spatula, transfer the fish to an ovenproof plate and set in the oven.

6. With the skillet still over medium-high, pour in the poblano mixture and whisk until it comes to a boil and thickens, about 1 minute. Reduce the heat to medium-low and simmer, stirring frequently, for 5 minutes to blend the flavors. If the sauce has thickened past the consistency of a cream soup, whisk in a little more milk. Taste and season with salt, usually a generous H teaspoon. Add the spinach to the sauce and stir until it is warm and well coated with sauce.

7. Divide the creamy spinach among four plates. Top each portion with a piece of seared fish. (Or, if it appeals to you more, spoon the sauce over the fillets.) Serve without delay.
Posted by Nancy/n.o.e at 11:33 PM

Yum, this looks very tasty. If I hadn't eaten salmon four times already this week I might even be tempted to make some tonight!!

Mexican salmon - how cool (or should I say "hot")! Looks very delicious Nancy! I love spinach (anything) - especially in sauces. What a great way to spice up salmon - this is definitely going on my spring/summer menu, once it stops snowing nd I can plant the darn spinach!

This looks amazing Nancy! We love salmon but haven't had it much lately so I just might need to look for some next time I'm out. I'm pretty sure I couldn't get Shane to eat the sauce though, so I'll just have to eat his portion :)

Gorgeous dish and I love that sauce--very unique!

My oh my this looks springy and delicious...I love all these ingredients, so putting them all together like this sounds like a great party to me. Wonderful photo of it all, too.

This looks incredible, Nancy! We keep talking about how I need to cook more fish. This looks like a wonderful one to try next!

Nancy, this is salmon at its best. I have to make this, hopefully, this week. We love salmon and I am always looking for delicious ways to make it. Thanks.

Would you link this to My Meatless Mondays? It is just the kind of recipe, we love to have.

Nancy, this is salmon at its best. I have to make this, hopefully, this week. We love salmon and I am always looking for delicious ways to make it. Thanks.

Would you link this to My Meatless Mondays? It is just the kind of recipe, we love to have.