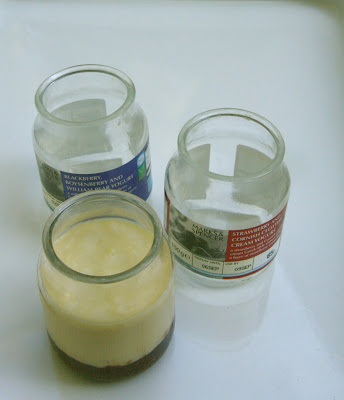 In the summer of 2003 I was lucky enough to spend a few weeks in Scotland. Our accommodations were "self-catering" (translation: "comes with an equipped kitchen"), so we could eat some of our meals right at the apartment. I reveled in the local Marks & Spencer food hall which was stocked with wonderful ingredients and even more wonderful prepared meals. One of my favorite discoveries was a Greek-style yogurt that came in little glass jars, in flavors such as "Blackberry, Boysenberry and William Pear Yogurt" and " Strawberry and Cornish Clotted Cream Yogurt." Delicious!

On some level I knew that the yogurt was not quite equivalent to the non-fat yogurt choices that I usually stuck to at home, but really it wasn't even close - each of those little guys packed a walloping 900 calories. In blissful denial I simply enjoyed this indulgence, and couldn't resist tucking the tiny jars in my carry-on luggage for the journey home. They've occupied the back corner of the cupboard above my microwave, alongside vases that I seldom use.

When I saw the recipe for this week's Tuesdays With Dorie assigned recipe, the Split Level Pudding, I knew immediately that I wanted to portion it into glass containers so that the chocolate layer would be visible underneath the vanilla layer, and the little jars had a new use.

- I made 1/3 recipe of the pudding, enough for two small servings.

- Dorie's pudding method involves scraping ingredients into and out of a saucepan and a food processor. Back when my daughters and I made the butterscotch pudding, we used the food processor for part of the batch and a whisk for the rest, and learned that the food processor made pudding that is more perfectly smooth than the whisk.

- This partial batch had greatly reduced quantities of ingredients, so I used my mini food processor for some of the steps, but also used my whisk, because the mini wasn't quite big enough. My pudding was smooth, but I'm pretty sure it would have been silkier had I adhered to Dorie's method.

- Last week's P&Q post contained the very helpful suggestion to use the leftover chocolate ganache from the caramel tart for the base layer of this pudding. I had a couple different types of ganache in the freezer. I grabbed the last bits of Sweet Melissa's ganache and warmed it in the microwave so I could pour it into the bottom of the glass jars. I chilled it in the fridge, then carefully spooned the vanilla pudding layer over the chocolate. As usual I found it impossible to layer without smudging the glass.

- There were some white chocolate curls in my baking drawer and I scattered them over the top, but immediately regretted it. They just looked like lumps.

- Because my husband is allergic to chocolate, his serving was all vanilla pudding. 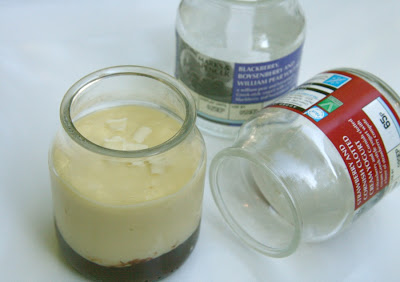 The vanilla pudding was the best I've ever eaten - a really really good vanilla pudding. My husband loved his portion, and I liked the vanilla part of my dessert. But the combination of vanilla and chocolate wasn't really successful, which I attribute largely to user error. I used a different ganache, and it was solid at refrigerator temperatures. I found the two different textures to be very distracting. I also wasn't sure I liked the combination of intense chocolate of the ganache with the lovely delicate vanilla flavor of the pudding.

If I need vanilla pudding I'll definitely call on this recipe, but I didn't like the vanilla and chocolate enough together to try the combination again.

Thanks to Garrett of Flavor of Vanilla for choosing this week's recipe - we have a new favorite vanilla pudding! You can find the recipe on his post or on pages 384- 385 of Dorie Greenspan's book, Baking: From My Home to Yours.
Posted by Nancy/n.o.e at 1:34 AM

Love those jars - and what a great recycling project (both for the jars and the chocolate ganache). Sorry it wasn't your favorite combo, but at least you were successful in the pudding-making department. Scotland.... one can dream - what a great post (and treat) this week!

I was laughing when I saw your picture because I made my sistet "import" some French yogurt pots so I could make an authentic French yogurt cake! They're so cute! And so is your dessert - I'm glad you liked the top layer, at least! (Sounds wonderful.)

What sweet little jars!
900 calories.. wow, that is a lot for yogurt.
Glad the vanilla pudding was such a success!

I absolutely love little jars like that - too adorable! And fyi, I made the chocolate portion from the recipe, and mine was solid at room temp as well. Although my room temp right now is around 65*, so who knows ;) Your puddings look wonderful!

Ciao ! I'd like to try one of those yogurt !! I loved the vanilla too (I've already made it again for the kids !!)

I still haven't figured out if the chocolate ganache was supposed to be firm or soft and more pudding-like. Either way, I think your assessment is right on. The vanilla was amazing (even though mine didn't set up properly).

I'm agreeing with the adorableness of the jars. I also agree that the two flavors were a bit distracting. Ah well.

I'm a huge fan of vanilla pudding. So I will have to give this a try. And I agree with your glass jar - looks gorgeous.

I thought the ganache was a bit heavy in contrast to the vanilla, but I suppose that was the point. It was all good, though.

Love love love the little jars! :) Bummer that it wasn't a favorite for the flavors together.

Love the little pots idea... and am really happy that you liked the vanilla portion so much! True, it was a very good one.

What adorable jars- the yogurt from Scotland sounds amazing! when I lived in Estonia for 18 months I really loved the yogurt and actually couldn't eat it when I first came back because it just didn't taste very good.
anyway! back to your pudding. It looks really good. I am not sure why I skipped it.
Good to know that it will be your go-to. I will keep that in mind when I need to make vanilla pudding.

900 calories?!? I wonder what my favorite French yogurts are...no wonder they're so delicious!

I'm glad you both liked the pudding. I envy you your freezer full of leftover ganache!

Those little jars are cute. The vanilla pudding was tasty. I liked it more than the ganache. I'll have to try it again and hopefully have more success.

I carted some similar little yogurt jars home from France. I think my husband thought I was nuts. Your pudding looks great in them. I loved the texture and flavor contrast of this, and you're right about it being a very good vanilla pudding.

I love those jars Nancy and I'm so jealous of your trip to Scotland - sounds like it was fabulous! As you already know, our experience with this recipe was nearly identical. Even Shane turned his nose up at the texture of the ganache and he's not very picky. Oh well, it was a fun one to make anyway!

Great use of the jars, it's fun to see both layers. I'm glad you and your husband enjoyed it; I also thought the vanilla part was exceptionally good pudding.

I really enjoyed the ganache. I think you are right -you need to serve it in a glass to get the full effect.

Now I understand why you have an affinity for Greek style yogurt. It makes perfect sense. So glad you enjoyed the first level of the dessert. I made half the recipe and shared the three little portions with my daughter and her friends. I thought I was going to eat all of the vanilla pudding when it was first made. It really smelled so delicious. Glad you liked it.
AmyRuth

Those jars have earned their trans-Atlantic trip! Lovely photos.

love the jars! glad the vanilla was rocking it

When I lived in London, I lived right by a Marks and Spencer! Unfortunately, I wasn't into cooking at the time, but I remember loving that store! They had food AND clothing! Come on!

The jars are adorable! 900 calories per pudding is super scary, though!

I actually combined the pudding and the ganache after I chilled the pudding because I had some leftover ganache and saw how much it hardened up! It is definitely not good for leftovers, that is for sure! I'm sorry you weren't crazy about the ganache, but am happy that you liked the pudding!

yummm that would be good with some sort of warm preserves, yes?

haha-- when i went to london, i did the same thing with the cute little yogurt jars...stuffed a collection of empties into my suitcase! pudding sounds great...you are making me wish i'd made the vanilla version!

Love the jars. =) I think this one definitely needed a softer ganache. I didn't eat any myself, but I looked at the ganache layer while B&G were eating some and it looked like it was pudding consistency.

Each of those jars of yogurt were 900 calories? Wow. I love the jars. Glad you liked vanilla pudding. It was delicious!

The little jars are so sweet and just perfect for this pudding. It looks very pretty with the two layers. Happy to hear it was delicious.