Fudgy Brownies from The Essence of Chocolate 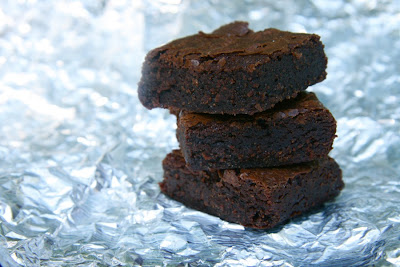 Back at the beginning of the summer I was planning for a brownie taste-off. I had two strong contenders on hand (in the freezer, that is): the Baked brownies, Sweet Melissa's brownies, and Dorie Greenspan's version of Katherine Hepburn's brownies was third candidate. Then I heard from my bloggy friend Di that her favorites are the Fudgy Brownies from from The Essence of Chocolate by John Scharffenberger and Robert Steinberg. So I quickly whipped up a batch to include in the brownie taste test! I'll post a full report of the taste test results at a later date, but this entry is about the Scharffen Berger Fudgy Brownies. And I've gotta say, they deserve a post all to themselves!


"In order to achieve the crackled top and fudgy texture of classic brownies, this batter must be beaten by hand until it pulls from the sides of the bowl. This sounds like a task, but it’s not; there’s something homey and satisfying about stirring this thick, glossy batter yourself."

I was all ready for a "homey and satisfying" baking experience, all the more so since it wouldn't involve washing the mixer!

- You can find recipe here.

- It took about 3 min of vigorous beating until the batter came away from the side of my bowl, enough time to make my arm just the littlest bit sore.

- This recipe has no vanilla or other flavoring - just pure unadulterated chocolate.

- The brownies baked at 325 for 33 minutes. I used the King Arthur divot test to determine doneness.

- This recipe has a higher amount of flour and lower butter than Dorie's Katherine Hepburn brownies, so they were less greasy on the surface.

These are really delicious brownies. If you like cakey brownies or brownies with complex flavors, these are not the ones for you. They're uncomplicatedly fudgy - nothing else is present to distract or diffuse the strong dense chocolate-y flavor and texture.

At the brownie taste-off one of the tasters, AT, mentioned that these would be good warm with ice cream. She also said that she was not sure if she could eat a big serving because they are so rich and fudgy.

This is a wonderful recipe to have in the brownie repertory!
Posted by Nancy/n.o.e at 10:30 PM

Wow. I went to the Food BlogHer conference last month and Scharffen Berger gave us a ton of chocolate. I've wanted to make just the right things with it. Their brownies are now on my list! Thanks for all your work!

:) I'll take that book out of my bookshelf and peruse it once again! I have not made those yet (surprise, surprise), but now cannot wait. Very interested to see the results - all but John's and Melissa's have been in my oven, what a great idea for a taste-test, and what better subject matter. You've really captured the "fudgy nature" of these - they look absolutely sinful!

Fudgy brownies with less butter than the Katharine Hepburn brownies sounds fantastic. I don't think brownies need complex flavors; it's their job to be fudgy!

I'll trust you on this one.

I love fudgy brownies. Those look and sound great!

As I was making this week's TWD dessert, I was thinking it had been a while since I had made brownies; thanks for sharing this recipe. They look amazing, fudgy brownies are the best.

Oh good lord these look good. I ate a brownie over the weekend that was made in one of those special brownie pans, where all the brownies have an edge. It was awesome, but I suspect it came out of a box..

OH! YUM! I love a good fudge brownie. I may have to try these. If you need just one more brownie-I found one on the brownie project blog that was an oreo brownie--so fudgy and truly amazing! Very rich though! Cant wait to try! I love taste tests like this ;)

Whoa...sounds like a perfect brownie in my eyes! I'll have to save this one to try.

mmm, I do like my brownies dense and fudgey, they look great!

These look amazing! I'm personally not a fan of fudgy brownies but Shane loves all brownies and I'm sure his coworkers won't turn down brownies. Thanks for sharing.

Yay, the Essence brownie post! =) I'm glad you enjoyed them. I was just thinking yesterday that brownies sounded good... Might have to make some. And BTW, they're quite good with some peanut butter chips thrown in.

And here I thought I was done baking for the evening. Pulling out chocolate now...