I picked up some good-looking halibut at Whole Foods today, and rather than making my recent favored recipe, I decided to search for a new recipe. Well I say that the fish looked good, but you'll just have to take my word for it. Things were a little chaotic around our house as I was trying to cook, and I totally FORGOT to photograph our food. We just sat down and ate dinner like normal people who don't delay eating their meals for pictures! We enjoyed this fish so much I decided to post the recipe without visual aids , so you'll have to use your imaginations.

Anyways, a quick search on FoodieView turned up a highly-rated Cooking Light recipe called Cornflake Crusted Halibut with Chile Cilantro Aioli.
The overwhelmingly favorable reviews had some great suggestions, and I had a few of my own ideas. Here's what I did:

- used Panko crumbs rather than cornflakes
- used white whole wheat flour
- added more salt and pepper to the crumbs
- skipped the egg white and just used the milk wash
- made half recipe of the fish but a full recipe of the aioli.
- used 2 T reduced fat Hellman's mayo and 1 T olive oil in the aioli (rather than 3 T nonfat mayo)
- doubled the amount of garlic in the aioli

The Verdict:
This fish was excellent - our new favorite way to eat halibut (but really, is there a bad way to eat halibut?) It's the combination of the breading, the lemon squeeze, AND the fabulous aioli that makes this fish taste so good.

Using olive oil as a substitute for 1/3 of the mayo made for a nice smooth mellow sauce, with the slight kick of serrano pepper (really it wasn't too very spicy for us). It was good to have double the sauce, and I'd do that again.

As a reward for reading this whole post without pictures, here's a little peek at the beginning of the recipe - the chopped serrano pepper: 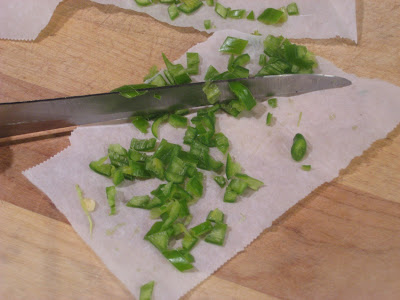 {Update 9/14/08: the halibut is invisible no longer! I made it again, and this time had the camera handy.} 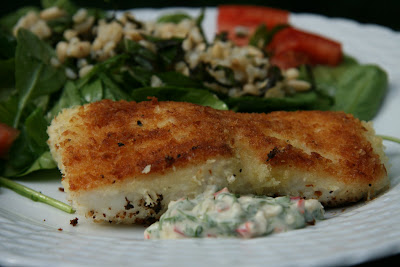