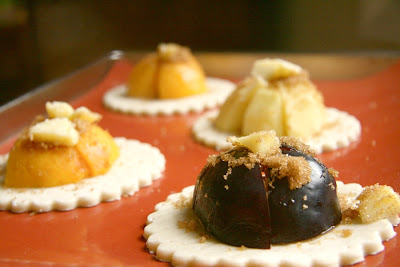 This week’s Tuesdays With Dorie assignment, the Parisian Apple Tartlet, has got to be the fastest and easiest recipe in Dorie Greenspan’s cookbook, Baking From My Home to Yours. It takes no longer than 5 minutes to assemble, and in about half an hour, there’s dessert! If you do what I did, make 4 tarts with different types of fruit, then you add about another 5 minutes to the assembly time. And that’s it! Perfect for me this week, as I am extra-busy, and this recipe fit right into my crazy day on Sunday.

And to match the short recipe, this post will be uncharacteristically brief. You can all breathe a sigh of relief! 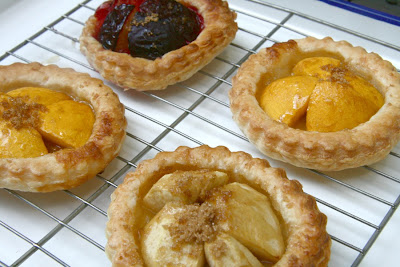 - Dorie’s recipe calls for store-bought all-butter puff pastry. I located a 1 lb box at Trader Joe’s. From reading this week’s P&Q I gathered that having a strikingly easy assignment wasn’t as welcome to some of my fellow bakers as it was to me; there was lots of discussion about making puff pastry at home rather than reaching for a handy box of Trader Joe’s, or Dufour, or even good old Pepperidge Farm. I'm very impressed with their energy, and no doubt I'll be even more impressed with their pastry! Someday I may try making my own, but for this week I was grateful to open a box and be done with it.

- I cut my tartlet circles using my little tartlet molds, which are just under 4".

- I peeled the apple and the peach but left the skin on the plum.

- My tarts were pretty juicy, especially the plum one ,which ran all over the baking sheet. They were a tiny bit soggy on the bottom, so in the future I might not use the silicone or the double cookie sheets (I keep my cushion-aire baking sheet in the oven and just put everything I bake on it). And maybe do something about that juicy fruit!

- A few minutes before the end of baking I sprinkled some more brown sugar on the tarts, so they'd be pretty. 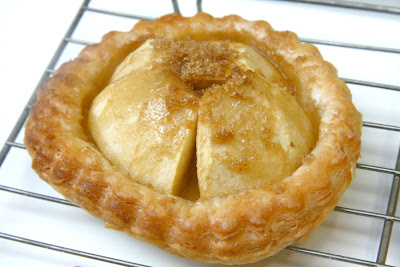 These tarts were good, and I'll have to say, they have a special place in my heart because of how easy they are!

We thought that we would like the peach ones the best (which is why I made two of them) and we did enjoy them. What's not to like about ripe peaches and warm pastry? But we liked the other fruits even more. My husband preferred the apple. I could not get him to taste the plum - he claimed that he was too full! What? When has that ever stopped dessert at our house? Anyway, I loved the plum. This particular plum was quite tart, which was a nice contrast to the rich and refined pastry. I think that I'll sprinkle on some cinnamon along with the brown sugar next time I bake these.

As I was eating my tart(s) I was trying to figure how how to evaluate the recipe. It was quite delicious, but certainly not in the same league as the French Pear Tart or the Tartest Lemon Tart. But the sheer simplicity of the recipe (well, for those of us who used the boxed puff pastry, that is!) helps these tarts to cut closer to the front of the line. I was reminded of the blog Effort to Deliciousness, where Margot evaluates recipes based on a combination of effort and, well, deliciousness. While I can't replicate Margot's scientific approach, I can say that this recipe delivers - both in taste and appearance - far beyond the 5 minutes it takes to throw it in the oven.

Thanks to Jessica of My Baking Heart for picking this delicious dessert for us this week. 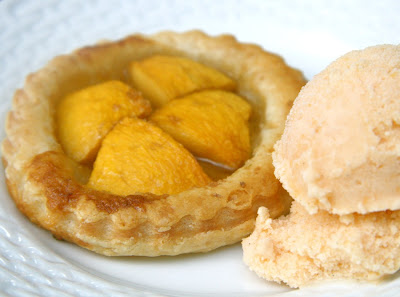 Here's a little sneak peek at the TWD recipe for two weeks from now...!

Well, so do the tarts, but you know what I mean!

i love your scalloped edge on the tartlets! tres chic!

I did peach tartlettes, but I'll have to try the plum and apple soon! Great comparison!

Nancy - true works of art! I left my book at home and obviously didn't pay attention to how they were "supposed" to look. Love, love, love the scalloped edges and how evenly the pastry envelopes the fruit. So THAT'S what it should have done... something was definitely off kilter in my kitchen. Love the variety, photos and review!

I love your bevy of tarts...and I'm kind of fond of that sneak peek too. Gorgeous colors!

Yum! I love your tarts and commentary. I thought this dessert was just wonderful, but it is true that part of the beauty comes from how simple it was.
Your ice cream looks delicious too!

I did the same run to Trader Joe's after reading in P&Q that they had puff pastry! What a find!

I loved this for the simplicity--and the fact that it's a one-at-a-time dessert...so I won't be tempted with leftovers between now and next week!

I love your tartlets..just that simple scallop edge makes all the difference!

I love all of the creations that you made. I still haven't made these but I'm planning on having them for dessert tonight. My goal today is to knock out: bagels (still no malt powder so I'm going the brown sugar route. Today is the last day that I have time to make them), ice cream, tartlets. Woo hoo! I was originally only going to make peach but after reading that the apple was your husband's favorite, I'm going to make an apple tartlet, too.

OH! I love that you made this with the different fruits. Your tarts look perfect and puffy. Mine didnt 'puff' but were still wonderful!

Those are some cute tartlets!! Love the edges on them...

Those look amazing! I agree that much of the appeal of this recipe is the simplicity. It's a nice change.

Awesome tarts. Seriously the easiest and tastiest recipe so far (since I joined) in the book. Yum. Love your ruffled edges and all four tarts look de-lish. I shyed away from the puff pastry, but only because I love it so much. I did something else with mine.

So pretty. I'll have to try a plum one next time. I thought it was fun taste testing all the different fruits. Peach won at my house.

They turned out fantastic looking...I don't know how you could pick just one, I would have wanted to sample each variety. This was the perfect week for you to get your hands on an easy dessert recipe. Great job, very beautifully done.

Love the different kinds of fruit! They look pretty and I can't believe anyone would want to make the puff pastry when there are so many good ones available!

This definitely scores points for simplicity! As much as I love the French Pear Tart, it is nice to have a quick recipe up my sleeve.

I love that you made all different sorts, that's my kind of experiment! They look great, and clearly you have enough for me...

I love all the different kinds you made! Nice work!

This is the kind of recipe that is good to have in the repertoire. It isn't as mind blowing as some of those others but, when you need something decent in a pinch, this would be hard to beat.

You might want to check his head for fever.

Thanks so much for baking with me this week! Your tartlets are so cute! :)

You may have the cutest of all the unbaked tartlets. And your finished ones look amazing too!
Is that a dollop of Honey Peach Ice Cream I see?

I love the edges on your tartlets Nancy! Makes them look even more elegant! All of your versions sound good - I definitely want to try peach when peaches are in season around here. Like your husband, I was a big fan of the apple tartlet.

Oh I couldn't wait to get over here and see what wonderful you did with these and I was right. Love that you made your edges so decorative with the scallops. Mine are so plain in comparison. But werent these just really good? We loved them.

I did plum, too - so yummy. Your tarts look great! I loved how simple yet elegant these tartlets were. I love your scalloped edges - they make the tartlets extra special!

I love how you tried different fruits. That is on my to-do list. I don't know how they could get much better than apple! Your scalloped edges are beautiful.

I like how you did the different versions. I really want to try this again with peaches. Maybe plums, too, when we get some ripe ones. As usual, I am envious of your access to TJs. =)

Yours look so perfect! I made a variety as well and my boyfriend liked the apple best too. This recipe definitely skews my "scientific" EDR results; I don't think I'll ever get such a high EDR!

I sometimes glaze over at long posts, but yours are indubitably full of great information so I enjoy them.

These are winners and yours look great. I love that they are easy to take and eat on the go.

I love all of the tarts! Job well done!

I loved these tarts, too. So easy, and they seem to work with every fruit under the sun!

The simplicity of this one could not be beat! Someday, I will try to conquer the dough too. But for now, I'll stick with the boxed stuff! Great job, Nancy!

Great looking tarts. I like the different fruits. And sooooo easy. Cannot wait to do the ice cream if I can find some good, ripe, sweet ***** . Well, you know....

Love how you tried these with different fruits. I just made one apple, but I'll have to mix it up. I would like to make puff pastry once just to say I've done it, but when Dorie Greenspan doesn't bother to make her own because there are such great frozen varieties on the market, it's hard to imagine that puff pastry making is going to happen very often in my house! Glad that this simple recipe came just at the right time for you! Your tarts look wonderful!

Ooo, these look so tasty, and adorable the way you cut them out. I'm so glad I wasn't the only one who thought "Just open a box! Yippee!" Don't get me wrong, I admire the puff pastry makers but we have some more labor intensive recipe coming up, and I'm pacing myself. I hope your Internet service realizes you're a busy blogger and gets its act together!

I agree, it totally delivers. And I went with good ol' Pepperidge Farm. So easy, why not? Gorgeous tarts!