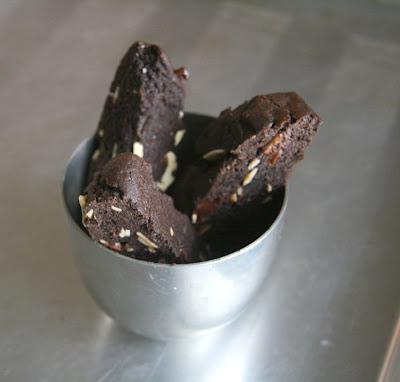 Biscotti are twice-baked cookies. First the dough is shaped into a flat log and baked. Once the log has cooled, it is sliced up and the pieces are put back on the baking sheet for some more oven time.

Something about biscotti seems to inspire baker extraordinaire Dorie Greenspan to think of military-type formations. And although the image seems crystal-clear in her mind, sometimes she leaves her baker followers in the Tuesdays With Dorie baking group a bit in the dark. The first time the TWD bakers made biscotti (the Lenox Almond Biscotti), there was much confusion and hilarity over Dorie's instruction in the recipe to "stand them up like a marching band" for the second bake. (Case in point: Cathy/The Tortefeasor's 2008 biscotti post, which you really owe it to yourself to read.)

Biscotti are once again on the TWD "to bake" list. This week's assigned recipe is Chocolate Biscotti, and when the recipe instructions get to the part about the second bake, Dorie advises, "you'll have an army of biscotti." Thank goodness I knew what to expect this time: all you have to do is cut the baked cookie log and separate the resulting pieces, with the same side facing down as in the first bake. Ideally you will line them up, as Dorie envisions, although I've found that they bake just as well with a haphazard arrangement as with a military or a marching band formation on the baking sheet.

- Jacque of Daisy Lane Cakes is this week's hostess, and she chose the biscotti recipe. Click over to Jacque's biscotti post to find the recipe, or better yet, click to Jacque's post and also buy yourself a copy of Dorie's book, Baking; From My House to Yours.

- I veered ever so slightly from the recipe. The cocoa powder I used was King Arthur Flour's Double-Dutch Dark Cocoa which I thought would be a good way to ensure as intense a chocolate flavor as possible. When it came time to add the espresso powder, mine was nowhere to be found. Instead, I used instant decaf coffee. This seemed like a better plan anyway, since I intended to serve the biscotti at an evening meeting of my book group. Who needs biscotti-induced insomnia, anyway?

- The recipe calls for almonds, but Dorie gives a lot of leeway as to which type of almond. I used some sliced, toasted almonds. I prefer sliced almonds in cookies because they produce nice, thin crunchy bits. 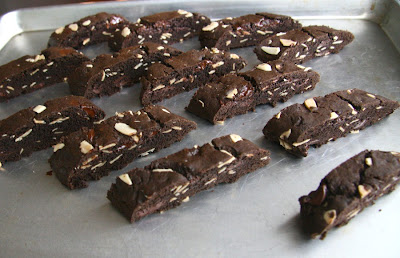 My biscotti have not achieved military or marching band precision, but they still baked up perfectly

- I had a momentary mental lapse when I forgot to add the chocolate chips and the almonds to the biscotti dough. I had already formed the log and put it in the oven, when I remembered the add-ins hadn't been added! I immediately pulled it out again, put it back in the bowl, added the missing ingredients and re-formed the log. Whew!

The biscotti had the requisite crunchy texture, but they were not at all dry-tasting. The chocolate flavor was prominent, aided by little pockets of melty chocolate chips, and complemented by the toasty almonds. My tasters all loved this recipe. The leftovers were divided among them, with one couple planning to pack the biscotti as snacks for a long stint in the car the following day.
Posted by Nancy/n.o.e at 12:01 AM

Looks delicious and dark! Your biscotti has used a great combination. I prefer yours compared to traditional biscotti with fruits.

Dori has such reliable recipes. You can never loose when baking from her cookbooks!

These are pretty tasty! Thank goodness I'd baked enough biscotti before that I knew how to line them up.

I like homemade biscotti since they are crunchy but not nearly as dry as store bought. Yours look super dark chocolaty!

Very nice, Nancy! These were a hit around here, too! :)

Yours look so good I'm going to have to make these again today! I also used the KAF cocoa and slivered almonds, but I dipped mine in melted chocolate too. I well remember Cathy's post and the confusion we had about Dorie's instructions. How far we've all come!

Mmmmm...double-dutch cocoa! Even though I'm not nearly as big of a chocoholic as Dorie is, that sounds FANTASTIC! Even though I used regular cocoa powder, they were a HUGE hit at home and work!

You're right, it is funny that our posts were sort of the same. thanks so much for the link to Cathy's post; I really enjoyed retracing it. I knew there had been some great "marching band" posts, but didn't take the time to look for them.

Let's just say your 'army' of biscotti are more for guerilla warfare!!

Cathy was funny in that post. I think we all had the same idea. Say What??

These were good, weren't they.

Your biscotti look SO good. They make mine look like some weird alien species ;P I love how dark and tasty these turned out!

You're right. The difference in these is the lack of dryness. they were so yummy. Yours looks delicious!