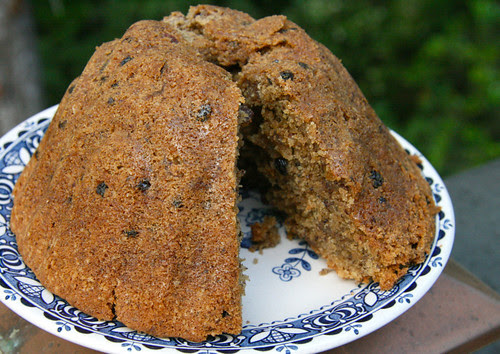 Being one among a couple of hundred members of the Tuesdays With Dorie baking group has shown me the seemingly infinite variation among bakers, particularly when it comes to recipes preferred by the group's members. Case in point: the recipe that appealed to me most when I first opened my copy of Dorie Greenspan 's Baking: From My Home to Yours - the Swedish Visiting Cake - was still available for me to choose when my hosting turn rolled around, more than 2 years after the group started. Another example: when my daughter JDE bought Dorie's book three years ago, the Brown Sugar Bundt Cake was one of the first recipes she baked, but it wasn't chosen for the group until this week; more than 150 recipes were chosen ahead of it!
A testament to the quality and depth of this book is that these recipes that we are baking in the group's final year, far from being "dregs," are producing some of the tastiest baked goods to date!
n.o.e.'s notes:
- Peggy, of the blog Pantry Revisited, is this week's hostess; you can find the recipe on her blog post. I love reading Peggy's blog because she is always cooking up something fun in her kitchen. Besides, we Southern bloggers need to stick together, right?
- JDE joined me in the kitchen and we baked the bundt together. We made half recipe in a small pudding mold/tube cake pan.
- As written, the recipe calls for adding pieces of pear and chopped prunes to the batter. The ever-helpful Dorie suggests that apples would be a good substitute for the pears and any kind of dried fruit could stand in for prunes. Dorie gives a further option for making a nutty brown sugar bundt cake, and because I love pecans with brown sugar I decided to go that direction and bake a super-pecan bundt. I used King Arthur Flour's Pecan Meal in place of some of the all-purpose flour, substituted 2 oz of pecan oil (which I had bought a couple of months ago when I visited B&B Pecans in Fairhope, AL) for 2 oz of the butter, and stirred in a generous handful of deeply-toasted pecans (also from B&B Pecans). I also added some teensy currants. The flavorings were almond and vanilla extracts.
- The brown sugar I used was pretty dark, but I'm never one to object to a more intense brown sugar flavor.
- The cake crumbled when I sliced it, but I think that might be because I cut into it before it was completely cooled. It definitely was not a dry cake.
the verdict:
This cake was delicious, very moist and nutty with a distinctive flavor of brown sugar. I thought it was great plain but I certainly wouldn't argue with a little whipped cream on top. As much as we enjoyed it the first evening, warm from the oven - and we did enjoy it, each of us going back for second helpings! - it was even better the next day when the flavors had a chance to settle and combine. The pecan version was delicious, but I'm betting the cake would be equally good with walnuts and walnut oil.
Posted by Nancy/n.o.e at 6:31 PM

Mmm, I'm with you. I love pecans with brown sugar. One advantage of being behind everyone else in baking this is that I'm getting lots of yummy ideas!

Nancy your cake looks and sounds delicious. You are right that these last recipes in the book are not necessarily the worst of the bunch. I really enjoyed this cake. I am somewhat of a bundt cake fanatic. We all have our quirks I guess!! Thanks so much for your sweet comment and for baking along with me this week!

I agree, it got more tasty as it aged. I shared most of it and everyone really loved it. Very few recipes in this book that I haven't loved, that's for sure.

Ciao Nancy ! I' sure the pecan version was fantastic ! Are pecans from the south ? I'm very curious about your oil !

Pecans would be fantastic! It sounds like I could do some serious damage at B&B! We didn't cut ours until the next day, which is very uncharacteristic, and it was pretty easy to cut. I wholeheartedly recommend the hazelnut version, and I'll definitely use some hazelnut oil the next time I make it.

I really liked this cake. I'm finding that the later recipes that are being chosen are more interesting somehow. I made the all hazelnut version of this cake and it was excellent.

How fun to have JDE in the kitchen with you. Cannot wait for LTP to get old enough since her Mom was never interested.

Pecans and brown sugar always works. What I used. Will have to get some Pecan Oil at our local Pecan sheller business.

I love that you made it with JDE. So fun. I also agree that these last recipes in the book aren't "the dregs"..they are really good. XOXO, M

The pan is just wonderful...makes such a beautiful looking cake. Your combination of flavors sounds delightful...maybe I should make this one after all.

This looks lovely. I love bunt cakes - they make it so easy to creat a beautiful cake!