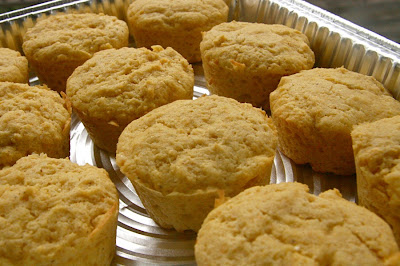 The selection for this week's Tuesdays With Dorie baking group is Dorie Greenspan's Corniest Corn Muffins. Ever since I've joined this group I've heard rave reviews of these corn muffins, so I was definitely interested in trying them out for myself. Since they are kin to cornbread, there is the inevitable North/South/West divide as to the amount of sweetener that is appropriate. Luckily I sidestep all those differences of opinion and eat my cornbread any way that it is served to me. Except, however, with kernels of corn in it. If I chop the corn kernels when adding them to corn bread or muffins they will pass muster, but whole kernels are pretty much unacceptable.

n.o.e.'s notes:
- The muffins were picked for the group this week by Jill of the blog My Next Life. If you don't happen to have the book, you can visit Jill's blog for the recipe.

- I love honey alongside my corn muffins, so this time I decided to bake it right into the muffins. I substituted 5 T honey crystals for the recipe's 6 T sugar. Next time I think I'd cut at least one more tablespoon.

- For oil I used light tasting olive oil rather than corn oil, because that's what I had handy.

These muffins lived up to their hype. They were fluffy and moist, lightly sweet, with a subtle crunch. My daughter JDE tasted one and observed: "these are really nice." They definitely beat out the box muffins from Jiffy!
Posted by Nancy/n.o.e at 12:02 AM

I didn't add corn to mine either.

Beautiful muffins. The texture looks finer than mine.

I am still excited to try out your Sunset Magazine cornbread recipe!

No corn addition over here either! They tasted good with out it! Your muffins look great!

Me too - either way north/south - it's all good!
Buttercreambarbie

I loved the corn in mine! I love all cornbread however. Yours look great as always.

Yummy, those look good. I am not picky when it comes to corn bread as long as I have honey nearby I am a happy camper.

Very pretty! I too adore honey with my muffins, so adding it to the batter was a great idea!

You omitted the corn kernels??? Well, what kind of fun was that? Just kidding, we have a few of those people over here as well so I did a half and half version. They look great!