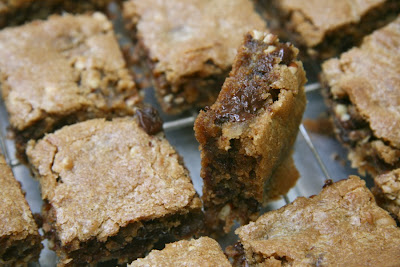 Back in the day, nearly 30 years ago, when I was newly married, I was introduced to my first "blondies" (so-called because they are a light, non-chocolate version of brownies) in two different ways.

There was a bakery on the mezzanine level of the big Davison's Department Store about a block from my office downtown. The only thing I remember from that bakery is their "blond brownies" - they were big and wonderfully chewy in the center - a perfect mid-afternoon snack. (There was also a cookie store in the ground floor of my office building, so even though I had no time to spend in the kitchen, thanks to those two shops I was not starved for freshly-baked goodies)

Around the same time I learned of an old recipe in my husband's family called "Butterscotch Delights" (which I recently posted, here). Over the years when I had just a bit of time I'd whip up a batch of those bar cookies and they always make a hit. In fact that's part of of the charm of a good blondie recipe: nearly everyone loves to eat the final product!

This week's assigned recipe for the baking group Tuesdays With Dorie is Chewy, Chunky Blondies, chosen by Nicole of the blog Cookies on Friday. I was eager to bake this version, which is filled with lots of chips and nuts.
n.o.e.'s notes:

- Dorie's recipe (which you can find on Nicole's post, here) calls for light brown sugar and granulated sugar. I used dark brown sugar and palm sugar - to emphasize the butterscotch-y flavor.

- Although I forgot the vanilla (accidentally) I doubled the salt (on purpose) to wake up the flavors.

- I baked half a recipe in an 8x8 pan, which I lined with a buttered parchment sling so the blondies would release easily from the pan.

- The blondies stayed in my oven about 40 minutes. They were a bit moist in the center, but I knew they'd pull together as they cooled.
- Earlier this year I tried a different loaded blondie recipe, "Killer Blondies" from the kitchn, which I posted here. That recipe was more intensely flavored; it used dark brown sugar along with even darker muscovado sugar, and instant coffee dissolved in brandy. (It also had a topping which I found to be a bit too crumbly and quite sweet.)
the verdict:
These blondies were nice and chewy and were packed full with add-ins. Mine turned out to be quite chocolatey, from the generous quantity of chips, the chocolate in the Heath bar and in the chocolate-covered cocoa nibs that I'd used, and I found myself wishing I could taste more of the blondie and less of the chocolate. The coconut added a subtle, but nice, note. Overall, I prefer the "Killer Blondies" from the kitchn's recipe (minus the topping), but I liked these blondies very much.
Posted by Nancy/n.o.e at 9:27 PM

I like your idea of adding nibs; I'll have to remember that. One thing I haven't done much of is experiment with different sugars. I like reading about your different substitutions.

I still haven't tried the nibs...but this is a good reminder! (And I think blondies are like blueberry muffins...it's good to have a library of them!)

ooh, now i want one of every treat you mention here:) sounds delicious!!!

Nibs? I have some in my pantry that I always think I should save for some silly reason. I really should pull them and put them to use. Great idea! I used the last 1/3 cup of brown sugar as dark mainly because I ran out of light. I do love dark BS with all the molasses flavor. Yours sound super delicious. Nicely done

Maybe I'll use them in ice cream, you've posted about that haven't you?
AmyRuth

They look so delicious; I love my brownies/blondies chewy and chunky so I'm sure these would be a fave.

I am definitely making your butterscotch delights for my dad when I get to Houston.
Your blondies look wonderful -- I would devour them in no time!

Your blondies turned out perfect! Such a yummy recipe :-)

I think I'll have to check out that recipe for the killer blondies. Sounds good. These look great though Nancy!

Oh, yeah, these sound and look plenty chocolatey! Guys would love your version, no doubt. Need to remember to give those other blondies of yours a try soon as I think those would be a hit...with ME!!!

You've made me wish I'd added the chocolate covered espresso beans I had. That killer brownie recipe looks like a good one to try.
Great idea about adding extra salt!

They do look dark and luscious, though maybe not the true blondie you were aiming for.

My old office had a deli on the ground floor that made killer carmelitas. I miss those things from time to time, but do I ever walk the six blocks to buy one? Nope. Sometimes the memories are better than trying to recapture the thing itself.

Your blondies look great! That sounds like a good batch of mix-ins. I may have to give your butterscotch brownies a try, they sound delicious.

They look so rich and flavorful. Love your idea for adding nibs.

I never think of adding extra salt. I will have to try that because I know it brings out the flavor.

I'm not sure which I like better - brownies or blondies. I will have to try your recipes - plural - they all look/sound delicious.

Your add-ins sound really good, but I liked the balance of chocolate/not chocolate. Thanks for baking with me this week.

I may have to try the other recipe...though I really, really liked these!