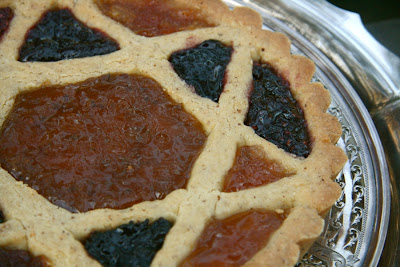 In western Christian tradition, today, January 6, is the Twelfth (and final) Day of Christmas. It is the feast of the Epiphany, the commemoration of the Three Kings, who followed a star to the Infant Jesus.

There are a few desserts that developed to celebrate the holiday. The most familiar is the Epiphany Cake, or Three Kings Cake, which can have a prize or tiny figure of the baby Jesus baked into it. When I taught Sunday School, I used to bring Epiphany cupcakes to class, and hide jelly candies inside three of the cupcakes. The children who ended up with those cupcake became "kings" for the class, and the rest of us were the followers. We made and decorated crowns and had a royally good time.

There is another Epiphany dessert, a tart with pastry strips forming a star shape (to recall the star that the kings followed to find the infant) and filled with different flavors of jam; one flavor per segment of pastry. The final effect is like a stained glass window, only edible. As soon as I learned of this tart (in my Williams-Sonoma Holiday Favorites cookbook) I knew that I would have to make it; I love tarts and I have an extensive jam selection just begging to be used. Luckily I had the perfect occasion.

Every year our book group has an annual Christmas dinner on a Saturday towards the end of the Twelve Days, so our dinner is often Epiphany-themed. How could I not make this tart for the group?

- You can read more about both of Epiphany desserts on The Old Foodie's post.

- The tart is quite simple: prepare a tart crust dough, shape a star from the dough, prebake the crust then fill the tart with various kind of jam and bake for an additional 5 minutes, until the jam is set.

- For the pastry I used Dorie Greenspan's sweet tart dough. I made the nut variation, substituting hazelnut meal for some of the flour. You can find the basic sweet tart dough recipe by clicking here and scrolling down. Dorie's tart crust is perfect: easy to work with and delicious as well.

- I used all purpose flour I received from King Arthur Flour back in the summer. King Arthur gave small bags of flour away with the request that it be used in a baked good to give or share with others. When the flour arrived in the mail we were in the middle of some construction work on the house, and I had limited access to my kitchen. So I put the flour aside and after that it was out of sight out of mind. When I came across the flour in December I decided that it would be perfect for this celebration dessert to be shared with a special group of close friends.

- My tart was on the petite side; I baked it in a 7.5 inch tart mold. I made a double batch of tart dough, and used two thirds of it for this Epiphany Tart and the other third for the Tarte Tatin.

- First I lined the tart mold with dough by pressing it lightly along the bottom and up the sides. I rolled the remaining dough between two sheets of plastic wrap to a thickness of about 1/4". I cut the dough into strips about 1/2" wide, then positioned them inside the tart shell to make a star shape, pinching to join them at the seams.

- I baked the crust until lightly golden. About halfway through the baking time, I used the handle of a silicone scraper to gently shape and fix the walls of the star, which had spread and sagged a bit in the oven. 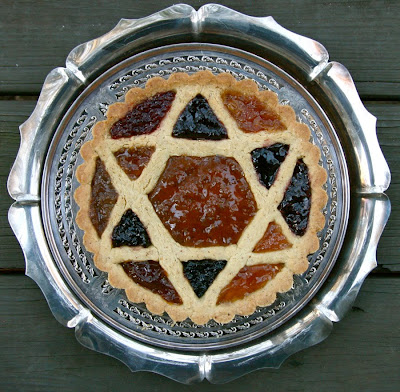 - Apparently it was a point of pride and/or a good omen in Victorian times to use as many different jams as possible in the Epiphany Tart. I used a different flavor jam for each of the 13 sections of the tart. The jams I used were:

(I actually took a photo of all of the jam jars I used, but since I'm writing this on an airplane and the photos are on my home computer, I can't show you. Just imagine 13 different sizes and types of jam, and you pretty much have the scene!)

- I spooned jam in each of the sections. Some of the sections were very small, so I only used a teaspoon or so of jam. At that rate I'd need to make a whole batch of tarts to make a dent in my jam supply! I made a diagram of the tart and labeled each type of jam and where it was located. The red raspberry was the one that I could instantly recognize, so that's what I used to orient the chart at serving time.

- After filling the tart, I returned it to the oven for 5 minutes to set the jam.

This tart was a fun addition to the dessert buffet at the book group's Christmas/Epiphany dinner. The distinctive star shape sparked a lot of discussion and everyone was pretty amused at the diagram explicating the locations of the different flavors of jam. When it came time to serve the tart there were a few requests of jams to include and avoid.

I had halfway expected that the primary appeal of the tart would be its novelty and symbolism, so I was surprised at how much people liked this tart. The crust is quite cookie-like and the jam wonderfully jammy. It was reminiscent of a large star-shaped thumbprint cookie. The next time I will make the tart bigger, so that the jam parts are bigger and the jam-to-crust ratio will be higher.

One of the group members, JT, tasted his tart first and really liked it. He offered the following advice, which became our guideline for serving and enjoying the tart: "Make sure your piece of tart has at least 3 different kinds of jam, then mix the flavors in your mouth." In his opinion, the tart would even make a good breakfast. And why not? It's got jam!

I'm glad that I had the opportunity to bake this intriguing, historical, and pretty dessert. It was perfect for our Epiphany party!
Posted by Nancy/n.o.e at 12:34 PM

What a beautiful tart! I am very impressed with how symmetrical your star is, I would never be able to do that... What a fun and perfect dessert for you, considering your jam collection! I love jam cookies, so this looks really delicous to me, I'll have to keep it in mind for a future occasion. Have a great flight, how lucky to have internet up there!

What a beautiful tart! My co-worker brought in a Rosca de Reyes cake and we are all looking for the baby Jesus. One person wants to bring it to the airport to get scanned so they don't get the baby and have to throw the tamales and hot chocolate party! :) And that collection of jams?? Please post a photo! :) - mary

Nancy, your Jam Tart is so lovely and so yummy looking. How neat to use all different types in the star. This one is going onto my (getting longer) to bake list.

Love the tart and all it signifies and ONLY YOU could come up with that many jams/jellies on the fly like that! So envious of that jam cupboard of yours! Great post. I wonder if I could make that next year...hmmmm...

That's beautiful nancy, and the reason behind it is too!

That's one of the most lovely tarts I've ever seen - so festive, beautiful crafted and photographed. *darn* I did have a King's Cake on my list of holiday baking... but still might do one - a bit late. You've inspired me!

So pretty! You did an amazing job shaping it.

You have 13 different kinds of jam? I haven't even ever heard of cloudberry.
This tart is beautiful. I wouldn't know which part to taste. I would have to have a small bite of each part for sure!

I had never heard of this art before. It looks amazing. Thanks so much for sharing with us.

Your jam collection is out of this world! I haven't even heard of a few of them :) Great job - I can't believe how symmetrical and perfect this tart looks. I could never...

Thumbprints are one of my top 5 cookies to eat, so I'm sold on this tart. I love that you were able to make this to celebrate the 12th night. I need to remember this for next year (hopefully). I'd love to see the picture of all of the jams!

Lovely tart, Nancy! I knew about your jam drawer, and I'm still impressed that you had 13 different kinds to use =)

Kathleen@so much to say said...

I would love to make this, but I have to admit that I balk at putting jams in it. Wouldn't that be terribly over sweet? I'm not quarrelling; I really would like to know how the sugar content compare to using, say, pie fillings. Input, please! I really want to make this next year; it looks awesome!