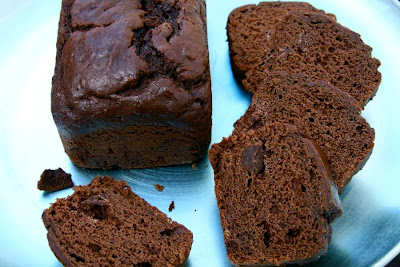 This week's recipe for Tuesdays with Dorie baking group is Cocoa-Nana Bread, which is interesting for a couple of reasons: Dorie calls it a "bread," she places it in the "breakfast" section of her book, Baking: From My Home to Yours, and it contains a somewhat unlikely combination of ingredients: chocolate and banana. The chocolate-banana issue garnered nearly as much controversy in TWD's P&Q post this week as the chocolate-raisin one did last week!

While I wasn't sure I'd like the flavors of chocolate and banana together, I made the recipe almost exactly as written, hoping that I'd be wowed by the combination.

- The Cocoa-Nana Bread was chosen this week by Steph of Obsessed With Baking, and you can find the recipe on her post.

- I made 2/3 recipe in two loaf pans; one small, one medium. The recipe was pretty simple to scale to that proportion. The only semi-tricky part was the egg, but with a digital scale that registers in grams, it really isn't that bad. To get 1 1/3 egg, I used one really large egg and added a bit of egg whites from the fridge to get 67 grams total (I usually assume a large egg weighs 50 grams without the shell).

- The only change I made to the recipe is to substitute 2 T of oil for butter in the hopes that it would ensure a nice moist crumb.

- I used a heaping 1/2 cup of mashed banana to equal 1 1/3 whole bananas. This is based on some research that I did when we baked the Black and White Banana Marble Loaf a while back (while there does not seem to be a consensus on the internet, I conclude that 2 bananas is just over 3/4 cup). I really wish that Dorie's recipe would have given a clue, because the size of fruit is quite variable.

- I baked each loaf just until the cake tester came out clean. I had lined the bottom of the pans with parchment, so the loaves released easily. Mine didn't seem to be as dense as those of some of my fellow bakers.

This loaf sliced well and had a nice, tight crumb. The chocolate chips I used were pretty big, so there were sizeable chunks of bittersweet chocolate in each small slice. Unfortunately, on first taste I found the bread a tiny bit dry, so I wish I'd used some more oil, or some yogurt, or more banana. My loaf had a mild chocolatey taste, and a slight, very subtle banana flavor. After an overnight rest in the fridge, the bread was fudgier and not as dry. I enjoyed the bread better cold than I had warm from the oven, but in the end I can't say that I was wowed by it. If I'm going to have chocolate it might as well be decadent, and if banana's on the menu, make it a plain old delicious banana bread!
Posted by Nancy/n.o.e at 12:01 AM

I'm sorry you didn't like this. O boy, I did cause a lot of controversy didn't I..haha.

This was another well written post Nancy, I enjoyed your notes.

Ciao Nancy ! Mine was moist but I'm always afraid to change the recipes the first time ! I'm sorry it didn't work for you !

Mine was moist, I baked it for 75 minutes. Sorry it wasn't a big hit for you.

i was following y'all on twitter when i decided *not* to make the bread. i'm with you...love a good banana bread and adore anything really chocolatey. together?!? well, i'm not sure i'd do that to either flavor.

I think that the oil substitution was a really great idea. I'm sorry that this didn't wow you, but I have to say, I kind of like all of the controversy around this bread. It certainly makes things interesting!

I think I am with you-if I am going to eat chocolate it better be something decadent! Your bread great though!

I agree with you. Neither flavor stood out enough for me. Ah well.

Ditto on the choco/banana mix. Not something I would repeat.

You have great texture with yours. Looks good and moist, even tho' you said it wasn't.

I wasn't wowed by this one either, though the hubby seems to like it. Yours looks great!

I used semi-sweet mini chocolate chips, I'll try the big chunks like you did next time. Also, I used 8 tablespoons oad of canola oil instead of butter and my loaf turned out really moist.

I am glad to have found your blog!!!

This does sound like it has potential since I love the chocolate/banana combination.

Yep this one just didn't ring my bell. Im glad I made it though!

I love coming here to read your notes week in and week out! And I ALWAYS wished I knew what an egg weighed when I cut down recipes and now I know! I'm sorry you weren't a fan of this one! Mine turned out REALLY banana-flavored, but my bananas were really big! The bread does look great, though!

Gosh, yours looks so beautiful! It was a hit with the guys, but not Top 5 or anything. I love how you review all the aspects so nicely each post.

Yeah, I really liked this, but I'm more likely to keep my banana bread and chocolate cake separate in the future. My recipe pet peeve is "one large onion," "two medium bananas," etc. Dorie is actually much better about that than many, but I'm so with you - give us a weight or measurement!!! Your cake (bread?) looks great - glad you liked it, even if it's not an all-time favorite.

I had the same reaction to this cake: better cold, but prefer plain banana bread or chocolate cake. The oil was a good idea, it seems like a lot of people found it dry.

I love Noe's notes! Great tip about the weight of an egg sans shell. I'll have to remember that next time I need to 1/3 a recipe :)

You're such a motivated baker when it comes to scaling recipes. For me, if I have to scale back, I'm going to do it based on how many eggs are in the recipe. Splitting eggs is just not likely to happen in my kitchen very often, even if I know the weight and how to go about it.

Anyway, your loaf looks terrific but I know it wasn't a favorite for you. I found that I enjoyed my muffins a lot more when they were still a bit warm from the oven. Today (the second day) they were just ok.

Sorry it wasn'st a wow--it certainly looks good--love those big hunks of chocolate in it. ;-)

We loved that bread... but I agree on your verdict. Although perhaps, you might have noticed that Dorie baking time are sometimes (often) pretty long. I know I have been tweeking them for over a year now.

Anywho... the pictures are really great, and I although I read about it, I still think your loaf looks pretty moist and plump!

Sorry you weren't wowed by it. It sure looks good. Toast it and spread it with Nutella. That should do it!

Banana played second fiddle on mine - which wasn't such a bad thing! But the chocolate chunks were a hit. I would have liked (and almost did) to add some sour cream or buttermilk - it seemed to be rather crumbly. Your "loaf" "bread" "cake" looks terrific though!

I like the idea of using bigger chocolate chips and more banana. Will keep that in mind for when I make this for myself.

Great post, Nancy. Your loaf did turn out really nice.

I like your idea of subbing oil for part of the butter. I didn't really get a good idea of how this one turned out, since I only got a small sample. And we have lots of decadent chocolate birthday cake to eat, so that takes care of that craving. =)

I wish I had made this instead of the mini choco bundt cakes since I did not have mini bundt pans! :)