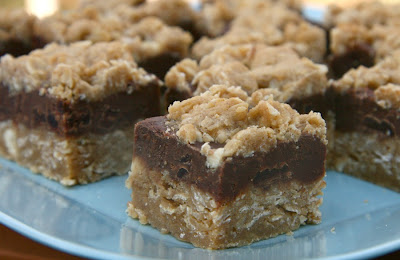 This week's recipe for Tuesdays With Dorie is Chocolate Oatmeal Almost-Candy Bars, and I was pretty excited to try the recipe, since I've never met an oat that I didn't like, and as much as I love baked goods, my real weakness is candy. Not only that, January is National Oatmeal Month, so this recipe, which uses a whopping 3 cups of oats, is a fitting way to celebrate. There's so much going on in these bars, they're like a party unto themselves!

- The recipe calls for plump raisins. I used plump dried cherries instead and chopped them in small pieces.

- For the chocolate layer, I had some previously-melted bittersweet chocolate (that I didn't use for the Cocoa Buttermilk Birthday Cake), which I combined with some milk chocolate and some semisweet chocolate. I was worried that the fudge might be too light and sweet, and wondered if I should have used all dark chocolate, but in the end I liked the balance of chocolate flavors.

- I trimmed the edges, then cut the bars into 48 squares (although Dorie cuts 36 bars). The bars are very dense and rich, so I thought mine were perfect for one serving. Plus, they were small enough that you wouldn't feel like a total glutton if you had to sneak back for a second bar. Just in case that happened to you. 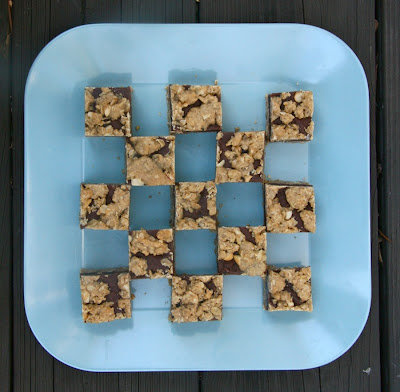 These bars are chewy, fudgy, oatmeal-y, with fruity notes from the cherries. They reminded me a bit of a chocolate/oatmeal pb&j, if you can imagine such a thing. I'm glad I didn't put the nuts in with the chocolate; the fudge layer made a nice contrast with the crust. But I wouldn't say candy-bar like; the large quantity of oatmeal keeps them squarely in the bar-cookie department.

I served the bars at our book group meeting last week, and they proved to be popular with nearly everyone. Here are some of the comments:

"They're kind of like raspberry bars, but with chocolate" (and once I heard that, I realized that I've tasted similar raspberry bars).

"Can we get the recipe for these?"

"Do you mind if I keep a few for my children?"

I had nearly 3 dozen bars left over, and they are packed up snugly in my freezer for a future occasion, so I'm not likely to have to bake this recipe again anytime soon. But if you would like to try these bars, you can find the recipe by clicking over to Lillian's blog, Confectiona’s Realm, or on pages 114 and 115 of Dorie Greenspan's book, Baking: From My Home to Yours.
Posted by Nancy/n.o.e at 12:04 AM

Great photos, Nancy...I love the grid on that beautiful plate! These were fun to make and eat. I didn't think "candy bar" either but still enjoyed them. Your topping looks so even and yet still random. Your freezer must be a fun place to "shop!"

Your photos are wonderful - I especially love that second one! It reminds me of a checkerboard :) These were too rich for me. I had one bite and that was about it, but they were tasty.

Ciao ! What a great arrangement ! I was afraid they would be too sweet but I liked them too !

I'll second the previous comments, I love the checkerboard, too! I had to sneak back for seconds more times than I care to admit. I didn't take pictures quickly enough, so they sat out, away from the safe haven of my freezer, and I devoured them (with a little bit of help). I'm not surprised that everyone at your meeting enjoyed these!

why would anyone sneak back for seconds? its not like iiii did or anything *looks away quickly*

your treats look great!! I'll be trying these again with nuts. :)

Great pics Nancy, sounds like they went over pretty well! I liked them, but didn't love them. Just a personal preference i guess :-P

I love the design you made with your bars on the blue plate. Very pretty.
Love your subs too!
These seem to be a hit with almost everyone so far.

These were so good-I kept reaching into the fridge for just one more...I plan to put the rest in the freezer.

3 dozen in your freezer? Sounds like you are ready for a party!

Your bars look wonderful. I love teh pictures.

They turned out great Nancy.

Cherries--what a good idea! I skipped the raisins and peanuts altogether and liked the smooth middle layer. A bit too much, actually!

Oats - not enough people use them! These look great - especially the checkerboard! And I should have sub'd with cherries - the raisins just didn't do it for me. Glad you had leftovers - they freeze well (all 132 of them)!

You are so creative. The checkerboard picture is great. That is an arrangement I haven't seen before.

Oh, I love your little chessboard look...so fun! They look perfect and how you got them all cut so neatly is beyond anything I can do. They are after me to make them again already. I believe the words "healthy with oatmeal and raisins and nuts" crossed their lips...who are they trying to kid???? Yours look beautiful.

Love your blue plate! Too pretty. And, your bars look perfect! I did sneak back for a second bar. :)

I love your checker board of cookies. I didn't add the raisins, but really like the idea of dried cherries. Notes for next time.

Love the checkers... I play with the pieces okay? You play on the empty spots! LOL

Good choice with the cherries. I left out the raisins and that was a good choice. And no nuts in the chocolate.

I love your pictures. I didn't do so well with that this week--my bars didn't cut neatly at all (but I didn't chill them at all, which may be why). I went with cashews, too, since I don't like peanuts that much.

I agree that I liked these bars and am not likely to make them again soon. Too many treats in my life! I used the raisins, and I'm happy that I did.

That photo of the "checkerboard" is fantastic. Your cookies turned out to be rich and chocolatey looking.

Teenagers take care of left overs, a good thing because I would have eaten way to many of these gooey bars.
Mimi

It seems delicious. Love your recipe! Thanks! I would like to make it at Halloween.

I tell you, when I saw the January recipes right smack in the middle of the holiday baking frenzy, I kind of sighed, because there was so much chocolate, and we have that whole David doesn't eat chocolate thing going on here. But I really think I need to revisit these. They sound great; they're practically guilt-free when you cut them small; and they're shareable. Yours look delicious (cool geometric pic!) and I'm glad they were a hit with book group!!

I love the way to present your dishes! The "candy bars" look soo appealing! Keep up the great work :)