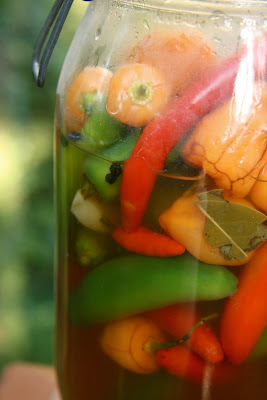 We, along with much of the rest of the US, have been in the grip of an extended cold snap. The biting air has been a sharp reminder of just how far we are from the balmy days of summer. But this year I found a way to save the summer heat and keep it all through the dark cold days of winter. I pickled - for the first time - my late summer bounty of hot peppers.

I got a little carried away when buying pepper plants at the beginning of the summer. We love hot peppers, and even though I remembered our pepper surplus the year I put in 4 pepper plants, this year I actually bought more: jalapeno, habenero, cayenne, serrano, tabasco, and one that my electrician told me is called "pepper from the tree." We had hot peppers for every occasion and recipe, and plenty to spare. Luckily in the first part of the season we had tons of workmen around, so I was able to pawn off give away peppers as they ripened. But then the work came to an end and I was left with friends and relatives as potential pepper recipients. When you have a surplus of super-hot peppers, you start to realize just how few people around you enjoy spicy food.

Enter David Lebovitz. However unlikely it may seem, this American-turned-Parisian pastry chef had a post on his blog - "Pickled Pepper Recipe" - that solved my pepper woes, allowing me to stretch my pepper harvest until the next growing season.

- David Lebovitz based his pickled pepper recipe on a recipe by Michael Ruhlman (author of the recent book Ratio, the cookbook with a cover you can actually cook from). In his blog post about pickled peppers, Ruhlman in turn credits Michael Symon for the recipe.

- I used an assortment of hot peppers.

- The pickling process couldn't have been quicker, and I've been enjoying the peppers in recipes calling for fresh hot peppers. They add not only heat but an interesting flavor from the brine.

- Ruhlman says that the peppers last "for ages" in the fridge, and he seems to be right. Mine have been there for around 3 months, and are still going strong (so to speak).

What a fun project! Although it's impossible for me to grow anything in Vegas, I would buy lots of peppers just for the sheer thrill of doing it myself!

I would love to have a jar of these peppers sitting in my fridge. What a great project.

I love the idea of pickling the extras from your summer garden. How wonderful to be able to enjoy the fruits of your labor all year round! Those peppers are so colorful and cheerful, it must be so nice to look at them on cold, dreary days.

I'm not a huge fan of peppers in general, but I love how colorful these look in the jar! I'm glad you were able to find a way to make your peppers last longer :)

Oh, and about those balmy summer days - I'm ready! As much as I love the snow, I'm sick of always being cold.

These are so pretty! Just what a I needed to brighten up a cold deary winter day. You are so talented, knowing how to do all these different things.