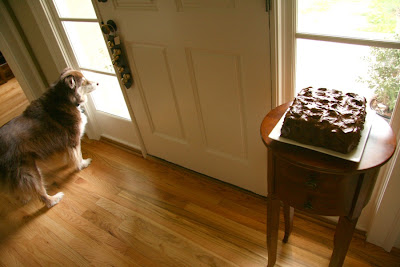 {edit: thanks to my daughter, ALE, for taking these pictures of the cake!}

On January 1 the Tuesdays With Dorie baking group turned two years old! You can read a bit about the group's history on this post written by the group's founder Laurie Woodward of the blog Slush. A milestone like this deserves a celebration! For the anniversary recipe, we had a choice of two recipes, the Cocoa Buttermilk Birthday Cake or the Tarte Tatin. I've never missed a recipe since joining the group in July of 2008, so I baked both the tart and the cake. 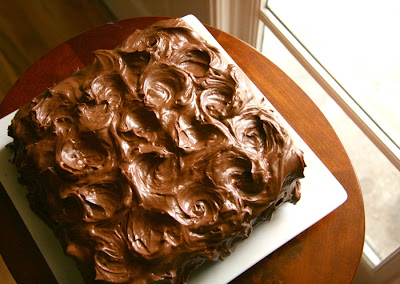 My mother's birthday is on Christmas Eve, and I was excited to have a great excuse to make the assigned birthday cake! I made a full recipe, as we had plenty of people to help eat the cake.

- You can find the recipe for the cake by clicking here - our founder Laurie graciously agreed to host the anniversary week, which means she got to type that whole chocolate cake recipe and post it on her blog.

- The recipe calls for two 9" round cake pans that are at least 2" deep. I don't have pans that size/depth, so I used two 8" square pans, which are equivalent in area. The square pans aren't very deep, so I crossed my fingers and hoped that the cake wouldn't overflow the rims of the pans.

- The cake can be made with cocoa only or with additional melted dark chocolate. Even though I measured, chopped and melted the chocolate, at the last minute I decided not to add it in. I've baked plenty of dark, dense chocolate cakes and tortes in the course of TWD, and this week I was intrigued by the prospect of a cocoa cake - that is the recipe's name, after all!

- Dorie frosts the birthday cake with a chocolate malt frosting. I didn't have the proper kind of malt, so I chose a chocolate frosting recipe from Cooks Illustrated (click here and scroll down, the frosting recipe is in the cake directions). True to usual CI style, the method was unusual, but luckily not difficult. The recipe made a ton of frosting, so I'm guessing it was meant for a three layer cake. Consequently I was able to pile a luxurious amount of the fluffy frosting on the cake. I've never made frosting swirls, and I discovered they aren't all that easy to do. I kind of like the exuberant look of the finished cake. 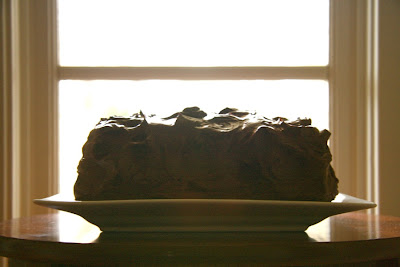 I am glad to have a subtle chocolate layer cake in my baker's toolbox. The layers were light in color, which made me think the cake would be dry, but it wasn't. The cake was soft and light, and matched well with the fluffy frosting. I'm sad to say that somehow in all of the excitement of Christmas I forgot to take a picture of a slice of the cake.

In the interest of full disclosure, I think the birthday girl might have preferred a denser, more fudgy cake, but that being said, she happily enjoyed a second piece!

The prospect of baking a tarte tatin was exciting and a little daunting. It is one of those desserts that you don't know how it turned out until you unmold it just prior to serving. Nothing like a little pressure! Fortunately I prepared the tart as a dessert just for my husband and me. 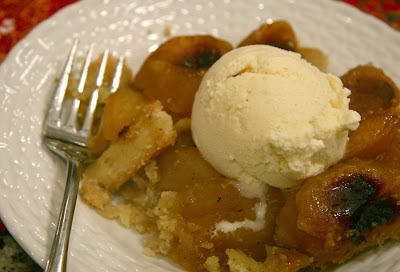 - Dorie's baking recipes are typically quite specific, but for this classic dessert, Dorie outlines a basic method and gives variations and options. Click here for the recipe.

- I baked half recipe of the tarte tatin, in a 6" cast iron skillet.

- For most of the apples, I used some wonderful, tart, local cooking apples that I got from the farm box. I supplemented with half a Fuji and half a Macoun (had those in the fridge).

- Dorie's instructions are to cook the caramel until dark in color, approximately 15 minutes. I cooked mine for over 20 minutes but the caramel was a pale golden color. I turned the heat a bit higher and got a lovely deep caramel. 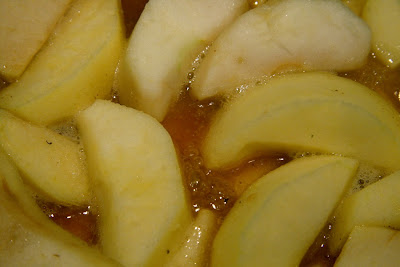 - The crust can be puff pastry, pie crust, or tart crust. A few days earlier I'd baked some tarts using Dorie's Sweet Tart Dough (you can find the tart crust recipe if you click here and then scroll down) so I made extra to have on hand for the Tarte Tatin.

- Dorie says to roll the dough about an inch wider than the skillet because the dough will shrink as it cooks. My tart dough did not shrink as it baked; instead the overhanging crust fell off and onto the cookie sheet that was under my skillet. The dough was golden brown in less than half the alloted time.

- Unmolding the tart is a little tricky. Dorie says to act quickly and confidently, and so I tried to do. Two of my apples stuck to the pan, but were easily re-placed. The tart was not centered on the serving plate, but luckily it slid fairly easily. The biggest disappointment is that most of the apples were a bit scorched, but neither of us cared very much about the blackened spots on the apples. 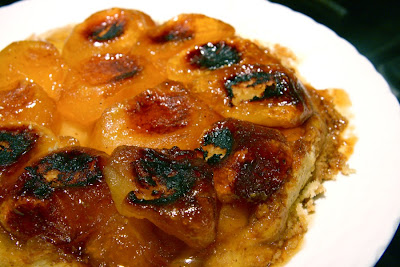 We have loved every tart in Dorie's book so far, and this one is no exception! I served the warm tart with ice cream, and it was quite good. The tart apples paired with the stong caramel to make a wonderfully deep rich flavor. It was so unusual that my husband took a bite and asked me, "Are these apricots or pears?"

Despite Dorie's admonitions that the tart is only good the day it is baked, I heated the leftover tart in the microwave and we loved it as much, if not more, then right from the oven.
Posted by Nancy/n.o.e at 12:33 AM

Ciao Nancy, you really baked a lot !! Your description of the birthday cake made me wanting to try it !!!

Note to self: make CI frosting next time. LOVE those cream swirls. Truly a homemade cake - fit for a birthday - and on Christmas Eve! I'm sure she enjoyed every bite! I'm jumping on the puff pastry bandwagon next time for the tarte tartin - looks more lighter and fluffier!

Nancy, Exact same experience with the Tatin. I was baking it for a party and realized I was running out of time when sugar was even beginning to caramelize after 15 minutes. Turned up the heat and scorched it a bit. Still good though.

And I love the square shape of the cake--so classy. Will check out frosting recipe.

I so with you lived near me, I would beg you to make a layer cake for my birthday. Its gorgeous! Looks just how a layer cake should look with the swirly frosting. Love it. And your tarte looks perfect too. Fab job all around!

Thanks so much for baking along with me. xo

Both recipes?! Great job, not only on this week but on your streak! Keep up the good work. Your cake looks divine and the tarte tatin looks delicious, even with scorched apples. I am going to have to try that one.

Boy I wish I could swirl like that with the frosting. Hopeless, absolutely hopeless on all that. Yours looks gorgeous. My apples got a little brown with some of them, too, but it was not a problem, we all thought it tasted just fine. I should have made my crust thicker, I think, yours looks nicer with the thickness.

I made the tarte too.

I also had to cook the caramel for longer than specified, but it was just so good.

What else do you use a 6" cast iron skillet for?

Wow!!! Way to go on baking both of the desserts with such success! I love the way you frosted the cake! And the tarte is beautiful! And so is your Aussie!

I loved the tart leftovers, too!
Your cake looks beautiful. I think you did a great swirling job. (I'm no good at swirling either!)
Glad you're a part of TWD, I've learned a lot from you!

Having a giveaway on my blog.

I am gaining weight just looking at the birthday cake.

The cake looks wonderful. Glad to know it tastes wonderful!

The tarte was glorious. I agree it tasted wonderful the next day too.

Wow...I can't believe you have never missed an assignment. BTW, I love reading your notes...they are always really helpful to a novice baker like myself!

The first thing I noticed was the swirls on your cake, they look like they were done by a professional! Your tarte tatin looks great, too. This was such a good dessert.

Enjoy your ski trip! Be kind to your foot!

oh, i love your swirls. so gorgeous.

i couldn't even think of the tatin after another caramel fail on christmas eve. one day i'll conquer this fear!

You are a superstar baking both desserts Nancy! I am so envious of your ability to plan ahead and make things work with your life. The cake is gorgeous - those swirls could not be more appropriate for a birthday celebration - so much fun! The tarte is lovely too. It seems most people went that route this week & as soon as I find a 6-inch cast-iron skillet I'll be making this one too. I know I'll love it!

Love the swirls on the chocolate cake, it is beautiful! :) Glad your tarte turned out so well too. I finished ours off tonight.

Oh Nancy, where to even begin! That cake is gorgeous. The picture of the cake in the window is amazing, I love your frosting swirls, I could just dive right in! I went with the Tarte Tartin this week and loved it! I do want to make the cake at some point, though.

Both are gorgeous! Your cake looks fabulous- I'll have to try that frosting.

I would love to walk in my front door and see that wonderful fluffy looking cake! YOur tarte looks super good too!
Happy Anniversary to TWD..it's been a blast baking with you!

Happy New Year! I've missed coming by to see what you have been baking. Your results look lovely. I made the cake and the malt frosting was very subtle, but good.

Oh, your cake is beautiful. Love the deep choco swirls of frosting. If there were more than two of us I would have made, but...

And I loved the tarte also. Even tho' made a mini it was enough to make us love it. Well, me anyway.

Great job on both.

Love love love that cake! There's just something about layer cakes, isn't there? My tarte scorched as well, but it was still tasty - we just ignored that there were overly caramelized spots :)

Your cake looks great, the swirls are lovely. The tart looks wonderful too! I wish I could get myself to bake things ahead of schedule so I could have tried both.

Such magnificent frosting swirls on the cake - and despite the scorching, your tarte Tatin looks lovely too. Whew - quite a baking week for you!

I loved the tarte tatin and while it was my first, I can't wait to make it again. IT was SO GOOD! And I love the way that cake turned out for you, Nancy. The frosting!! Holy Cow...I want to dive right into those swirls!

Great job on both the cake and the tarte! I like the square cake--I'm going to have to try that next time. The frosting looks fabulous. I don't think I've made that one, though I've tried others from CI. And I still want to make the tarte once I've acquired a suitable pan.

The chocolate cake is absolutely beautiful!