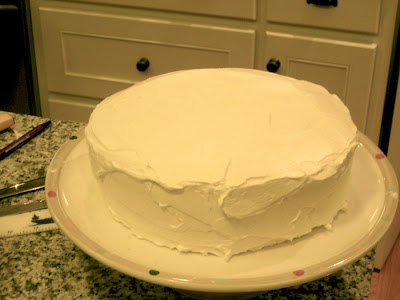 Hi, j.d.e. here, guest-posting for my mom this week. You may not have known that I was into food blogging way before my mom was. I’m not going to take all the credit, but I am actually the one who told her that she should make a food blog. *Ahem!*

Anyway, long long ago, in a land far, far away, way before my mom had her blog (which is to say, the 2007-2008 school year), I was reading all of these food blogs and came across a post featuring the recipe for Dorie’s Perfect Party Cake. I knew I had to make it soon.

Some backstory: I tried to bake a red velvet cake for my boyfriend G’s birthday last May, right before I came home from college, but I didn’t have cake flour, so I used regular flour instead. DON’T EVER DO THAT. That cake ended up turning out rather like a brick (red, dense, and rather dry). Let me tell y’all: brick cake is not where it’s at!

My boyfriend, the saint that he is, did indeed eat some of The Brick Cake—and even managed to squeeze out a compliment or two—but I felt so bad about his failed birthday cake that I decided to make him another cake when he visited Georgia over summer break. And that second cake was Dorie’s cake.

Now, the funny part is that my mom doesn’t remember ANY of this. She recently told me that TWD was making the Perfect Party Cake, and she was extremely surprised when I told her that I’d already made it once. Even my [terrible quality] pictures (see, above and below), very obviously taken in our kitchen, prompted a blank face. 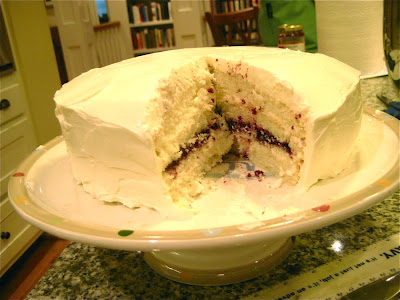 
- I did make four layers, but I didn't put both frosting and jam in each layer. Instead, I put frosting in two layers and jam in the middle one. Much easier.

- I used raspberry jam for the jam layer. If I remember correctly, it had seeds. I thought that the raspberry was great with the lemon, so if I made this again, I probably wouldn't be tempted to use one of my mom's many other exotic jellies. Though we have many.

- I do remember that my mom was very impressed when I split each cake round evenly in half, thus making four cake layers. (This doesn’t sound like a huge feat, but if you’ve ever seen me mangle bagels in the morning, you’d be impressed too!) She also liked the lemony taste of the whole cake overall. And that’s all I can say about the affair.

Don’t let my tale convince you that this cake is not memorable—it really is (for some of us). I do think that this is the cake I’d want if someone threw a party for me. In fact, this cake is what convinced me to buy Dorie’s book later that week. And Dorie’s book is what prompted me to tell my mom about Tuesdays With Dorie. And Tuesdays With Dorie is what prompted my mom to start this blog. The End.

When I first made this cake last August, I emailed a baking friend from the grocery store to ask if "self-rising flour" was the same thing as "cake flour." She sent an immediate response via urgent delivery: "NO IT IS NOT THE SAME THING!!!!!!" Who knew? Sorry the flour swap didn't work so well with the brick cake, but it looks like you more than made up for it with the Perfect Party Cake. I've made this 3 times but have yet to make it like it's supposed to be made; i.e., as a layer cake. Your layers are just perfect, and I bet the raspberry is really wonderful with the lemon. Oh, and I enjoyed reading the history of your mom's blog!

Great post, J.D.E.! Speaking for the collective blogging community, we're so glad you talked your mom into blogging because she is a treasure!

I'm very impressed by your PPC! It looks delicious with the raspberry layer peeking through.

What a great story! And splitting cake layers is tough, no matter how many times I've done it. Splitting bagels? Forget it. I'm lucky I still have all my fingers!

hi j.d.e! loved your post! i'm glad you made a go of it with this cake. the cake flour does make a huge difference in cakes like this. i'm lucky i ordered some awhile ago. thanks for hooking your mom on food blogging--i look forward to reading her posts:)

JDE, thanks from me too for showing your mom the light... because she brightens our days! Nancy probably doesn't remember because she was faint with happiness when she tasted it. :)

love the histroy behind the blog! This is one of my 'must-reads' each week--so I guess I have you to thank! :)

Ha! The cake that started it all. Great job! I thought G was your boyfriend, but your Mom never said. :)I hope you are having a grand time in Brazil.

I think your cake is just beautiful! I really like how you used jam and icing in the layers - great idea!

JDE, I had a similar experience as your Red Brick Cake when trying to make a chocolate cream pie for my boyfriend (now husband)years and years ago. It was an all-around disaster. I'd say you came back with a stellar recovery on this cake! So the Prefect Party Cake was the spark that got your mom blogging. I'll thank you for that because I really enjoy reading her posts. Well done!

That looks just lovely! Welcome to TWD for the week!

Well... the apple doesn't fall far from the tree! Even if you got your mom to blog, she got you the baker's talents, I would say! LOL

Bravo on that great accomplishment!

Now it's time to work on your mother's memory... a little brain jogging regularly wouldn't hurt, don't you agree!?

Great story! It sounds like you created a food blogging monster. The cake looks great, good idea to just put the jam in the middle.

I'm so impressed! Great cake! I still have a scar on my thumb from the time I tried to slice through a frozen bagel in a haphazard way, so I understand the troubles with cutting a cake layer in half. Good job, and thanks for posting this week!

You were smart to put that jelly in only one layer...I did it like Dorie and mine sort of melted into the cake and there was way too much jelly taste compared to cake taste...and I wanted to taste the cake because it is really really good. Cute story about the boyfriend...and happy to hear he is still about, because that means maybe we can make PPC into WEDDING CAKE someday soon and then into BABY SHOWER CAKES soon after that...okay, I can't help it, I'm a MOM! LOL. Lovely cake, lovely post, by a lovely daughter...better hurry back home, your mom misses you.

Well, it sure looks legit even if your mom doesn't remember it! She should be thanking you for inspiring her to start a blog and for providing a post for this week!

Well, I am glad you got her into theworld of blogging - she's great! (and so are you, nice post!)

Ha, I love this guest post! Great job. Thanks for talking your mom in to joining this great group. We love her! Well, okay, I guess I can't speak for everyone else, but I think she's pretty great! ;)

I'm almost sad I didn't use lemon, instead I used orange, which had a fabulous flavor of its own. Looks delicious!!

Looks good to me!

And you taught her will. She has great posts.

That's a great story. My favorite part is definitely "...very obviously taken in our kitchen..." I think my PPC (last March) was the first time I ever made a four layer cake by splitting cake layers.

Hi JDE! We've heard so much about you - glad you're guest posting this week :) Thanks so much for getting your mom to join TWD. She's fantastic!

You did a terrific job with the perfect party cake! Glad you enjoyed it so much.

What a great post!! The cake looked great. I think it was a neat idea to do 2 layers of frosting/whipped cream and one of the jam. Smart!

I love that you made this cake when you were just a kitchen baby. Now you are all grown up and showing the ways of kitchen adulthood. Hat's off! Great job and I loved reading your post. We hear about you with much affection, quite often. Its fun this blogging thing. Look forward to hearing from you in the future
BTW, your Mom is so smart and I'm glad she listened to you. he he
AmyRuth

Great post and great lookin cake. Thanks for takin over for this one.

Hi JDE! Thanks for showing your mom the light. Or are we the dark side? I guess it depends on how much cake you eat.
Yours turned out lovely. Well done!

What a good BF to eat brick cake! He's a keeper. Thanks for helping get your Mom into food blogging. We love her!

Great job on your party cake! I like the idea of the jam in the middle.

I used half cake flour, half AP flour because I ran out...and it was fine! (I did use the substitution suggestions). Sorry about the brick cake! Nothing makes me more upset than dessert not turning out!

How great that you shared your wonderful blogging expertise! I'm sure she will love it. And I LOVE your cake! (and the cake stand, of which I have a fetish for). It looks perfectly iced and nice and tall! I heard a lot of folks had problems with the cakes not rising, but yours looks super! Nicely done Nancy - it IS the Perfect Party Cake!