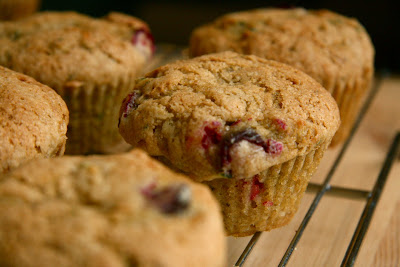 Several weeks ago I dug around in my cookbooks and online in a fruitless hunt for a cranberry muffin recipe that was oil-based and wasn't orange flavored. (My mother's cranberry-orange bread recipe, which I grew up on and love, calls for shortening. I just don't bake with shortening if I can avoid it, and I haven't taken the time to convert her recipe. I'm afraid other cranberry-orange recipes would fall short of the mark set by her classic.)

I ended up depleting my stash of cranberries by baking a some cranberry coffeecakes (which I loved). Of course right after I used up my last fresh cranberries I saw some enticing Zucchini and Cranberry muffins (a recipe from Martha Stewart's Baking Handbook) on two of my favorite blogs: The Food Librarian and Meet Me in the Kitchen. The muffins looked so good, and met all my criteria. I wasn't too optimistic about finding cranberries in February, but I checked around at a few stores, and, lo and behold! I was able to locate frozen cranberries at Fresh Market. I scooped up a few bags and was ready for February's Muffin of the Month (m.o.m.) for my mom! 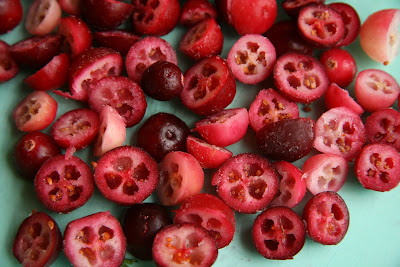 - You can find the recipe at either (or both) of the blogs linked above.

- I love any recipe with shredded zucchini that doesn't make me squeeze the moisture out! Seriously, is there really a worse job in the kitchen? Well, squeezing frozen spinach is a bit worse.

- I substituted 2/3 cup of white whole wheat flour for the all purpose flour.

- For oil, I used extra light tasting olive oil; I love baking with that oil, because it's a monounsaturated fat.

- I added 1/4 tsp lime juice to the liquids. Lemon would probably have been my first choice, but I had a cut lime in the fridge. Of course orange would be the classic, but I was looking for something different.

- Instead of extract I used vanilla paste. Although I usually substitute equal amounts, it might have been a little intense for this recipe.

- This was my first time using cranberries that were frozen when packaged. I've often put a bag of fresh cranberries in the freezer, but these seemed to fare better than mine, which sometimes get mushy - these were just about as crisp as fresh ones.

- I cut the cranberries in half because I love the way they look like little wagon wheels. Also, that size gives a nice hit of cranberry tartness.

- The muffins came together quickly. I spooned the batter into 10 individual silicone muffin cups (the recipe's stated yield). They rose nicely in the oven. I baked them at 360 degrees for about 27 minutes

- The sugar forms a crunchy sweet crust on the top of these muffins as they cook. 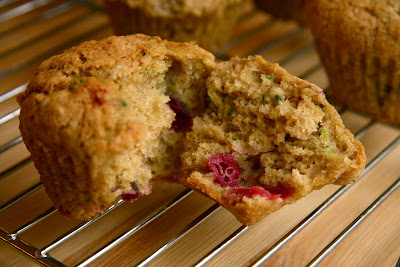 The muffins have a nice soft crumb and a lovely vanilla flavor. They're definitely a muffin, rather than a cake in disguise. Even so, they were just a little on the sweet side for my taste. I think I'd try to cut the sugar and increase the cranberries and the citrus presence - probably using lemon and lemon zest next time.

My mom loved these muffins just as they are! 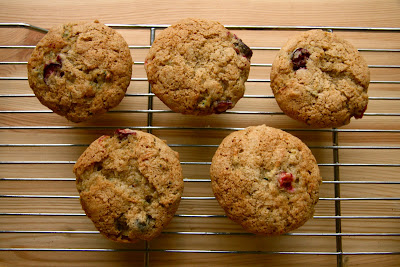 Those muffins look really good. I'm still too afraid to bake with whole wheat flour, but I made a batch of chocolate chip cookies using it. I'll see how that goes and then might try it in muffins.

I'm glad you made these! Yes, squeezing zucchini is not fun. :)

Mmm, do these look good and wholesome! Zucchini makes such a difference in these types of recipes. Can't wait to try this recipe!

Those muffins look delicious and perfect for breakfast. I love muffins but I don't like to start my day with anything overly sweet. I am going to put these on my list of things to "make soon."

I just realized that I've never seen a cranberry cut in half! I had no idea that it looked like that.

Your muffins look great. I love the way the cranberries look cut in half. This is my first time seeing it. Cool!

These look great! I have two bags of cranberries in my freezer that are calling to me...

I think I'd love these just as is, too! I love a little sweetness in berry muffins. The citrus and zucchini had to help balance everything out nicely. These look great!