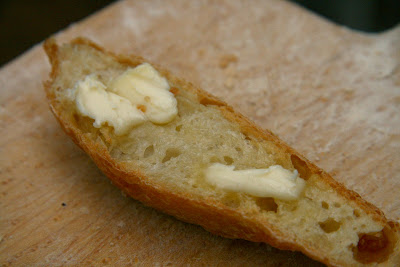 This bread was amazing with dinner, dipped into olive oil, and for breakfast, spread with salted butter.

In November 2006 Mark Bittman published the recipe for his No-Knead Bread, which immediately took the food blogging world by storm. I was blissfully unaware, however, since at the time I was neither a food blogger nor a yeast baker. But now I dabble in both, so although I've arrived late to the party, I'm still excited to be in on the hoopla. 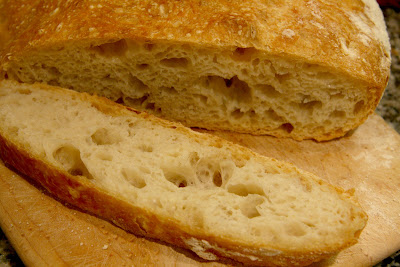 In the intervening two+ years since the recipe's publication, it's been baked, varied, analyzed and perfected by many experienced bakers. Even Mark Bittman has revisited his recipe, making it quicker, and devising a whole-grain version. For my first attempt at this bread, I used a blog with step by step pictures and tips - so easy even the blogger's four year-old can make it (and he shows us how).

- I followed the recipe to the letter. 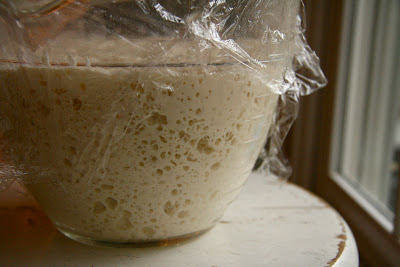 Here's the dough after about 8 hours. See all those bubbles? They are going to be holes in the bread when they grow up!!

- I need some practice in the turning out and shaping arena. The four year old can shape a better loaf than I can! The surface of mine was not taut. And even though I thought I'd dusted the tea towel generously enough, the loaf oozed in to the towel. Or maybe the dough was too wet?? 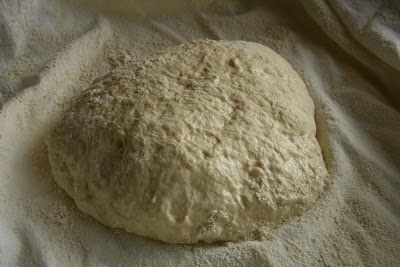 - I put a circle of parchment in the bottom of my pot so that the loaf would come out (rather than stick on the bottom) at the end of its cooking time.

- My bread was lopsided and flat, which I will try to improve on future loafs. 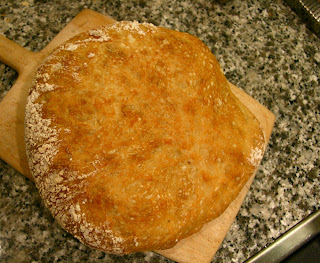 - My pot tolerated the high heat in the oven this time, but it did not seem happy. I don't think the handles will hold up to that heat on a regular basis. So the next time I make this bread it will need to be in a different pot.

The recipe specifies a 6-8 quart heavy pot. I'd really like to have a new 6 quart enameled cast iron pot but (1) I don't want to pay for one, and (2) I'm having a bout of cooking-induced elbow tendinitis (from wrestling with 25 lb turkey in January), and those pots are heavy! I've read that this bread can be baked in a crock pot insert, but mine's not big enough.

There is no question that a pan will be found/bought. Because I need to be able to make this bread; it's just that great.

This was the kind of bread that dreams are made of: crusty on the outside, substantial and chewy on the inside, with just the right kind of holes to soak up olive oil or butter or just be their splendid holey selves.

In the interest of full disclosure, I'll have to say that my husband did not rave about this bread. Instead, as I gushed on and on about my own baking, there was a restrained subtly approving murmur from his quarter. Under brutal cross-examination, he admitted that he thought it was lacking a little complexity of flavor. Hmm, we'll have to see what he thinks of it next time ;)
Posted by Nancy/n.o.e at 10:48 PM

I will second your rave review of this bread! I still can't believe that I made this in my kitchen. Hubs and I both give it unqualified, enthusiastic rave reviews. We loved it so much with butter that I might have a hard time moving to olive oil dipping, but I am sure that that is great too. I will have to let my dough rise in a glass bowl next time -- so cool to see those bubbles! I'll need to work on getting my planning/timing down, but this is definitely a keeper. Thanks for sharing it -- your bread looks beautiful!

Sabrina (my daughter) made this bread last summer - she added rosemary and lemon zest - and it was unbelievable! She just mentioned it again the other day, so I'll have to get her to make another loaf soon.

Even though it didn't look as picture perfect as you would have liked, the most important thing is that it tasted good!

You're on such a roll! (ouch.) I've been wanting to try this, but since I do have one Le Creuset pot of the right size/shape (and use it instead of free weights) I've been trying to find the new replacement knob that's designed to go in the hot oven. It's not expensive but never seems to be in stock. Thanks for the link to the step-by-step - with that extra info and your inspiration, I'm sure I'll make this sooner!
(PS - If you have a Marshalls/TJ Maxx/HomeGoods nearby you can sometimes find LeC there if you're interested.) Sorry about your elbow...

Crusty, chewy bread? Yes, please! I'd like a slice with that melting butter (like in your picture) and another slice for some olive oil (and maybe just a couple more for back up)! Your bread looks absolutely delicious. Can't wait to try this recipe for myself!

I have to admit that bread is the final frontier for me. I am yeast impaired. I have got to get over it.

To me, baking is the ultimate test of the home cook, or any cook for that matter. There's something so mysteriously alchemical about it all that I am intimidated.

Buy the cast iron pot. I love my Le Creuset and sometimes just leave it sitting, in all of its weighty glory, empty and stately on the back burner of my stove. No lifting required!

I made this for a the first time a few weeks ago. We loved it. I baked mine in my 4 qt. All-Clad. It worked out just fine. I'd love a Le Cruset, but there's no way I want to pay for it.

I've eaten this bread and loved it but I still haven't made it. I even got a pot for Christmas - just to make this bread in. Thanks for the additional links - I'll read up and get going!

Awesome bread! I've seen this recipe and have been meaning to try it - seeing your fab loaf just might be the push I need (knead?) to get going. I'll vouch for Le Creuset - spendy, yes, but your great-grandchildren will be able to use it. Being able to bake bread in it makes it's value even greater! (and if it's too heavy for you, well, maybe that needs to be hubby's job, to life the LC into the oven!!)

Thanks for reminding me of this recipe, Nancy! I remember telling my Mom about it because she hates kneading and won't deal with yeast breads because of it...

Now I need to find a good pot so I can make this at home:) We bought my Mom a Emile Henri pot--I believe it is all enamel and not cast iron like the Le Creuset or Staub--because it's MUCH lighter. So that might be an idea for a pot that won't exacerbate your cooking injuries:)

Me, I'm now becoming immune to those little oven rack burns on my wrists and arms.

I am so impressed by the bubbles in your bread! I've seen so many references to this bread that I'm going to have to try it very soon. I just ordered a huge bag of yeast so I have lots of incentives to bake!

Nice job on the bread, it does look dreamy:)

What a fabulous recipe. I always worry that my bread kneading skills aren't up to par, so this bread intrigues me! I'll have to give it a try. Thanks for sharing!

Great bread !! I've tried it some time ago and loved it ! I even found a recipe with a starter (that maybe could improve the lack of complexity...)but I'm afraid it's a journey too long for a piece of my baby !!!

I'm going to have to try this! We're both bread freaks here in the Pond!

Your loaf looks great. I'm going to have to try this recipe one day. I love baking bread.

This is my favourite kind of bread.. crusty outside..yum!!! I wish I could make this, but I don't even have a regular heavy duty pot. I think the heat would probably warp the pot before the bread could even cook. And I love flatter loaves because they mean more crust!!

It certainly looks delicious! I love a crusty bread especially lightly toasted with butter melting all over, yum!

Those holes are perfect! I can't believe I haven't tried this bread yet!

I love, love, love this bread!
I love how rustic (or shall we say artisanal) it looks. I love the texture and crunch of the crust. I love how chewy the crumb is, and the irregular holes. I love how the bread takes on a full wheat flavor rather than being overly yeasty. I love it with butter. I love it with olive oil, bagna cauda, strawberry jam, honey and a little Maldon sea salt...
*sigh*
I'm going to have to make some of this again... soon...
I don't bake mine in the pot, but rather on top of a baking stone with an inverted pot over it.
And mine totally oozed into the tea towel the first time too! Found I needed just a smidge more flour in the recipe.

It does look really good! I haven't tried Bittman's technique. But if you line a bowl with a well floured tea towel, you could let your dough do it's final rise in it and have a more rounded boule.
Love bread - so great that you are baking up such fabulous loaves!

I've done several of the no-knead breads out of the "Artisan Bread in 5 minutes" (by Hertzberg and Francois). I love them all. It convinced me that it's not necessary. Take a look at this book because I highly recommend it.

Everybody should try this bread at least once. You got a wonderful crumb with this one!
When I baked this the first time (and only truth be told) I was simply overwhelmed that it sang to me when it came out of the oven sometime in the middle of the night (and I do mean after midnight). And that crust was so divinely crisp.
But I have to agree with the husband, it misses on the complex flavor front.

Great job, GREAT bread. I love this recipe, too. No turning back. I've played around with whole wheat flours and such. Still great.

The bread looks great! I've been wanting to try the original no-knead recipe, but just haven't gotten to it. Since your husband commented about the lack of complexity, you might want to check out the Cooks Illustrated recipe for Almost No Knead Bread from January 2008. They do some things to add flavor. In that same issue, they rated Dutch ovens and found a relatively inexpensive ($40-range) enameled one from Tramontina. I bought one, and so far it's worked really great for me. I'd love to have some Le Creuset, but it's just not in my budget right now.

If you like Mark Bittman's no-knead bread recipe, you should take a look at Nancy Baggett's kneadlessly simple bread book. She has a bunch of no-knead bread recipes. Any of the recipes I have tried, have come out great! I just love how fresh everything tastes, and the lack of mess in my kitchen. Here's her website www.kitchenlane.com It has a recipe archive, so you can try out some of her recipes. There is also a link to her blog, so you can keep up with her latest activities. Happy Baking!