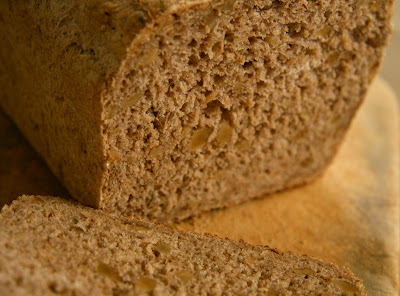 In honor of their one-year anniversary the Bread Baking Babes chose Carol Field’s Pane ai Cinque Cereali con Noci (Five-Grain Bread with Walnuts), adapted from The Italian Baker by Carol Field, for their February recipe. When I realized that I had all of the 5 flours in my baking drawer - oat, rye, brown rice, whole wheat, and all-purpose - I decided to try my hand at baking it (and thus be a "Buddy" of the BBB's this month!). You can (and I recommend that you do!) find the recipe and step-by-step photos at the host kitchen's site: My Kitchen in Half Cups. 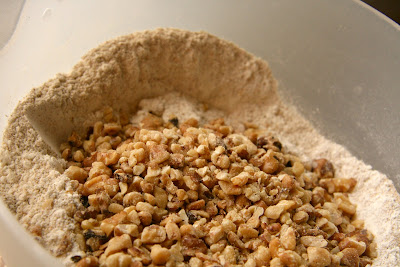 There is something about bowls that I find irresistible. I have a wide assortment of sizes, colors, and silhouettes of bowls. A deep drawer filled with nests of mixing bowls. Cupboard shelves overflowing with serving bowls, cereal bowls, soup bowls, condiment bowls. And on and on.

All of my big bowls are stored up on the tops of my kitchen cabinets. While they are always visible, I tend to forget that they are up there. When I was getting ready to bake this bread, I looked up and saw the perfect dough-mixing bowl, a purple-glazed one that I found last year at an antique store in rural Central New York. As I stirred, I wondered how many other breads had been made with that bowl. I was having such a nice meditative time mixing this bread... 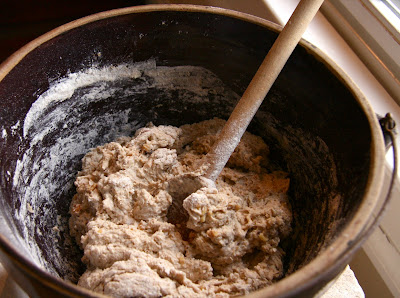 and then kneading it on the counter.

For the bulk rise I transferred the dough to an 8-cup glass measuring bowl because I love seeing the bubbles forming inside the dough, and the markings help me figure out when the dough has doubled. That bowl, an old Pyrex one, was owned by the original builders of the house we now live in. (When we bought the house from them, I also purchased some of the furniture and kitchenware.) I know that Kay was a marvelous baker, and I wondered if she ever made bread. More thoughts, following the rhythms of the dough. 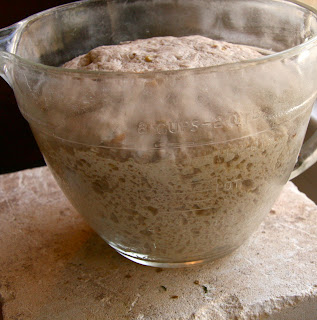 As my bread was rising L. and her son J. arrived at my door. J is a very active and curious 18 year-old boy, and he and L. were fascinated by the bread. This was only my second real kneaded bread, so I was trying to pay attention/figure out the recipe while at the same time explaining bread-making, yeast, rising, etc. Also under consideration/discussion: cleanliness standards of canning factories, my computer, the radio controlled plane hanging from our rafters, the counter-mounted air switch for my garbage disposer... this was one very inquisitive teen! Not under discussion: this crazy food blogging habit of mine.

Somewhere in all that I forgot to check the recipe's baking temperature. I ended up popping the loaf into the oven at the oven's default setting - 350 degrees. About 15 minutes later I realized my mistake and turned it up to the specified 400 degrees. Aargh. Despite that, the loaf baked up well. I left it in the oven until it reached 195 in the center, which I think was around 55 minutes or an hour (mostly I relied on the temperature). I sort of wonder if my loaf would have had some oven spring if not for the oven-temp mix-up?

Even though this bread was oceans away from J.'s preferred bread flavor - Hawaiian sweet bread - I insisted he taste it. If you're going to hang around and watch the dough rise twice and bake in the oven you pretty much need to judge how it turns out, right? They also stayed long enough to see me prepare flambeed cognac-prunes for my (upcoming post on Tuesday) TWD chocolate cake! (To our collective disappointment, the cognac burned in demure little flamelets rather than in a giant fireball.) Anyway, I'm not sure if L. and J. really liked the bread, but they were polite enough to say they did.

I have no doubts, on the other hand, about the honesty of my book club. They have gotten used to giving me frank appraisals of my baking efforts, and for my part I've given up worrying about hectoring them for opinions - and even quotes. It turns out that this bread was an enormous hit at book club, where I served it with two kinds of cheese: goat cheese, and English five counties cheese. Even though there were three cakes there (this was our pre-Lenten bash, very important in a Catholic book group) - including the very sexy chocolate (prune) cake - the bread was just as big of a draw.

I loved it with the English cheese, some of the others enjoyed it with the goat cheese, and a few - like my husband - liked it plain so much that they didn't want to put any cheese on it at all! Just one person decided to save her carb allotment for cake(s) only. 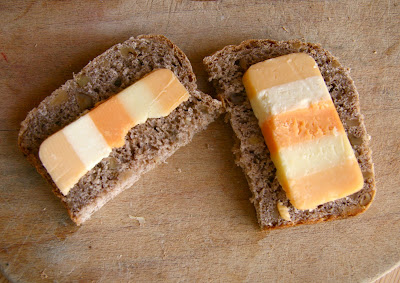 The walnuts were indeed the star of the bread but not in a stand out, showy way. These are walnuts as I've never experienced them in baked goods. In sweet breads and quick breads, they tend to be quite separate in taste and texture. In this bread, while the walnuts was discernible in a quietly authoritative way, at the same time they blended with the well-knit tastes of the 5 flours. It's like the grains lent a wonderful supporting nest that the walnut flavor sort of settled into.

I will make this bread again and again, and I will always have a little thought for the first time I baked it, when I experienced the the extremes of contemplating life and having life appear on my doorstep with its often chaotic and distracting moments. Which are really the essence of living. As is bread!
Posted by Nancy/n.o.e at 7:20 PM

I was so excited when I saw that you guys baked this bread. It looks absolutely fabulous!! I love walnuts. Yum, yum, yum!

What a lovely, lovely post! I hope the bread was as nice as the experience!
Audrey

That bread looks like it's good for the body and the soul. I love the picture of it with the cheese as well.

Fabulous post! My favorite part of cooking and baking is that it seems to inspire both contemplation and conversation. Sounds like you had plenty of both while making this bread! It looks fabulous! I am currently only 2 for 5 with the flour situation in my pantry, but that is easily rectified. Can't wait to try this!

The two best things about baking: the times when contemplating life brings peace and a clear container that allows those bubbles and visual doubling of dough - two of the best things about baking bread! Then top that with family and curiosity and good bread to eat . . . when when does it get any better!
You said it much better than I have.
I'm so glad you enjoyed the kneading and baking AND the bread. Thanks so much for baking with us!

I love that you have a flour drawer. And a bowl drawer. =) One of the things that I like best about my dough-rising buckets is that they're clear and I can see what's going on with the dough. It's really cool.

Nice job on the bread!

I love your story here about entertaining visitors with bread baking...the bread looks marvelous--such a great shape. And that cheese--wow. I can imagine it has a snap and bite that nicely complements the bread. Walnuts are a wonderful powerhouse:)

That bread looks great! I had a slice last night with cheese for the first time and it brought a whole new level to this bread for me! Gorgeous! Of course! Nuts, bread, cheese! It's a great combo all rolled in to one!

Geez Nancy! For someone who has only recently started making kneaded and yeast breads, you certainly are doing an amazing job! Your loaves have been gorgeous so far, this one is no exception~ please keep 'em coming!! You've inspired me to bake more bread

whoooooah that is some good looking bread. plus, the cheese, of course. YUM. i think that i may just come home and relax for spring break, so i'm looking forward to some bread baking action! and maybe some backpacking, i dunno.

Baking does lend itself toward meditation. That's why I like cooking so much, it gives me time alone with myself to just think. the bread looks great with the cheese! A perfect afternoon snack.

I love to speculate on who cooked and baked with all my antique dishes. I have that same old pyrex big batter bowl.

This is inspiring! It looks absolutely delicious and so very healthy!! Beautiful job.

The bread with the cheese on it looks so delicious!! It has such a beautiful texture!

I love that you had all the flours on hand. You are a baker, my friend!
Kneading and risings of hand crafted breads really can be a spiritual time, so wonderful of you to share yours.
Thanks for baking with us! I look forward to many more bread posts. :)

Yum, this looks SO tasty! I love nuts in bread.

Ciao Nancy I hope your holidays were good ! I've never seen a striped cheese ! I love your new baking you are great at it !And you know I don't even now of a soup with tortellini and meatballs !!! I send you a hug !

What a great post! I loved reading it all. The story of all the bowls was fun...I have the same collection, I have no idea why, but I love bowls...all shapes and sizes and I use them all all the time! The bread looks really great. I need to try this one, too. I better get going, so many I want to make!