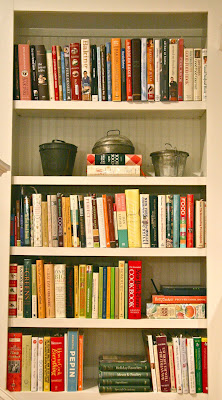 I had so much fun compiling last year's cookbook post, that I thought I'd do it again for the 2011 holiday gift-giving season! I've kept my eyes peeled for links and lists of top cookbooks and giving guides and other cookbook-related information. Most of the links feature cookbooks published in 2011, but there are some more far-reaching cookbook projects worth mentioning.

I hope that by perusing the lists and compilations you will find some gems to give as gifts or to round out your own cookbook holdings. You can purchase the books at your local independent bookseller, or order from Amazon up until the very last possible moment.

[edited December 31, 2011 to add:]
The wonderful search-your-own-cookbooks site, Eat Your Books (see my description below) has amalgamated voting from 195 "best of 2011" cookbook lists (including my post!), to come up with a consensus top cookbooks of 2011. Check out their findings here, and click on links to all of their individual source links of lists.

Cooking Light; 25 years:
To celebrate the 25th anniversary of the magazine, Cooking Light is compiling a list of the 100 best cookbooks of the past 25 years:

"As we contemplate turning 25, we decided to pick our favorite 100 cookbooks, which we’ll unveil over the next year across 15 categories. We looked at best-seller and awards lists, and talked to editors, authors, and experts. For consideration, books had to be published in the United States since 1987 and either be in print or easily available online. Winners emerged after passionate debate about voice, originality, beauty, importance, and a clear mission or vision. Yes, we tested the recipes. "

In November, the magazine listed the 9 Best General Cookbooks (I was pleasantly surprised to find that I own 5 of the 9 - and the yellow gourmet but not the green). Next came December's compilation of the 7 Best Baking Books (I have 3 of the 7) Tune into Cooking Light's site each month for more categories of Best Cookbooks of the past 25 years.

Also of interest:
- Check out this fascinating article "Recipe for Paring a Cookbook Collection" by Amanda Gold of the San Francisco Chronicle about how she and her husband winnowed their cookbook shelves complete with lists of their favorite cookbooks. Following that article, Bill Daley of the Chicago Tribune listed his 10 keeper cookbooks.

- SF Foodie has been compiling a list of best of cookbooks lists, which are posted here, with promises to update the list:

- the kitchn asked: What Was Your Favorite New Cookbook of 2011?

Cookbooks in favor in my kitchen in 2011:
When I was in my kitchen in 2011, these are the books that most frequently graced my kitchen counters. Because I don't get any free cookbooks, I tend to buy them when I can, and consequently, I'm rarely cooking from the very latest. That's fine with me; when I find a book I like I tend to use it for a long time. I hope you find books here (and among the 13 I recommended at the end of last year's cookbook post) worthy to add to you own bookshelves. 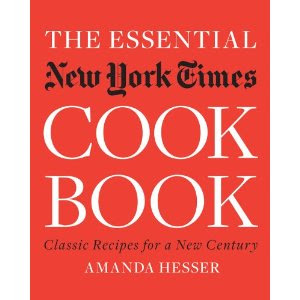 Amanda Hesser, The Essential New York Times Cookbook, - This cookbook falls in the "brick" category; so chunky and substantial that it could double as a doorstop (of a very heavy door). It is comprehensive and impeccably edited. I've tried a dozen or more recipes from this book and all have been exceptional; the Spicy Red Chili is our new go-to recipe. 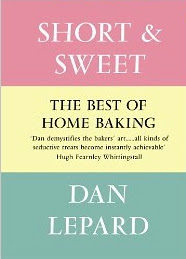 Dan Lepard, Short and Sweet, - I am a huge fan of the British baker Dan Lepard. He understands both the science and the art of baking, and is always exploring new techniques and flavors. The "short" in the book's title doesn't refer to the length of the cookbook - it's a hefty tome that manages to reassure and instruct beginning bakers while still providing delightful inspiration to more those more comfortable with their ovens. I've made his vanilla ice cream (good) but otherwise have only delved into its riches by while sitting on the sofa. This book isn't yet available in the US; I ordered it from amazon.co.uk and it arrived in a week's time at a total cost $30 including delivery from England. That's not bad for an excellent 576-page book. 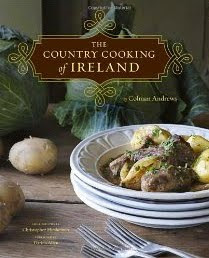 Coleman Andrews, Country Cooking of Ireland - I discovered this book when I was writing last year's cookbook roundup post, and I'm glad I did! Although there are entire chapters I'm not likely to explore, there are enough wonderful, rustic, intriguing dishes that call me to turn to this book when I'm looking for something just a bit different, such as a memorable soda bread that I made with freshly ground whole wheat flour. 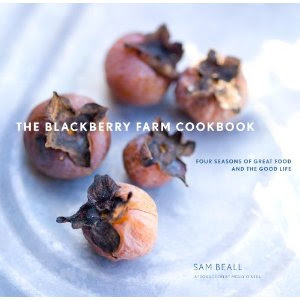 Sam Beall, The Blackberry Farm Cookbook - This book, from the country resort hotel the Inn at Blackberry Farm, is glossy and pretty and just a little highfalutin' to read, but the recipes are quite accessible and top-notch in flavor. I've made some lovely pies and exceptional ice cream. 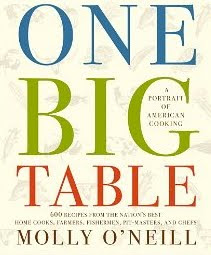 Molly O'Neill, One Big Table - I think of this book as a super-charged (in size and quality) version of those spiral-bound regional cookbooks. Molly O'Neill traveled across the US gathering recipes and talking with restaurants and home cooks. She makes the pages come alive by including stories about the people who contributed the recipes. This book is as fun to read as it is tasty to cook from. 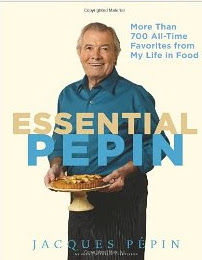 I haven't cooked from this book, not one thing, but I didn't have any of Jacques Pepin's cookbooks and when I saw this one at Costco in November I pounced on it. I've been happy to see that it's made some of the top cookbook lists, above, and look forward to exploring it. 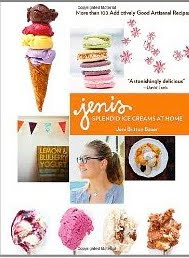 I wrote about meeting Jeni Bauer and about her ice cream previously, but wanted to mention her book again. Jeni has devised a startlingly different way to make ice cream, using no egg yolks, but adding cream cheese, corn (or tapioca) starch, and corn (or tapioca) syrup to her ice cream base. The resulting ice cream has great texture and the book presents a wide array of creative flavor combinations for which Jeni's ice cream is famous.

Finally, if you love cookbooks (and I cannot imagine that you've read this far if you don't care about them) I highly recommend the web service Eat Your Books. It acts as a search engine for your own collection of cookbooks and helps you find the perfect recipe in books on your very own shelf. I receive nothing from the site; I pay for my $25 annual membership just as you would (although membership is free if you index 5 books or fewer), and believe me, it pays me back in savings of time and in providing the satisfaction of using my own beloved cookbooks more fully.

If you have cookbook recommendations you can leave them in the comments. I'd love to hear them!
Posted by Nancy/n.o.e at 2:04 PM

I loved this roundup! I've definitely got a few of those books on my wish list. Although a local natural foods store is now selling Jeni's Splendid ice creams (I have a tub of boozy egg nog in my freezer right now), so do I really need to make my own? Decisions, decisions...

What a stellar roundup Nancy! I'm actually not asking for many cookbooks for Christmas this year because I am simply out of room to store them, but I love browsing new ones from my library. I'm bummed that Dan Lepard book isn't available in the US, I really want to check it out!

Ciao Nancy, so nice to read your review ! There are many I do not own..I'll start studying!!

Great source for all of us, thank you so very much! It is exciting to see lists and hear what others think and why they think it! I love that you included Eat Your Books, love, love, love that! Last year everyone had lots of books on their list and now this year everyone has only one or two...I have 10!!!! lol I am supposed to be downsizing!!! lol