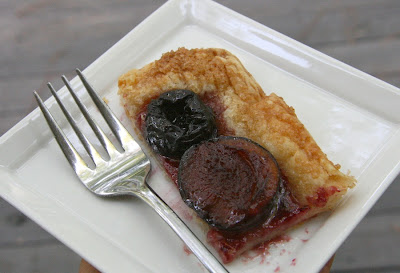 OK, folks, *it's* getting real in the Tuesdays with Dorie baking group. We are down to our last 3 recipes in Dorie Greenspan's book, Baking; From My Home to Yours. This week's host blogs are the two head honchos of the group: Laurie of Slush, who started this whole project 4 years ago, and Jules of Someone's in the Kitchen, who has been doing yeoman's duty administering the group.

Next Tuesday we all get to choose something from the past recipes to make and post. And the last Tuesday in December?

On December 27 Dorie Greenspan herself is choosing the final recipe of the book. Well when there's only one recipe left, I'm not sure you can really call it a choice, but Dorie is hosting us for the final week of TWD. I'm sure I'll be smiling through the tears at Dorie's "party" on the last week.

This week was another double header. First, a lovely tart: 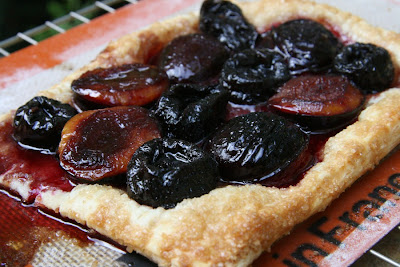 - You can find the recipe for this tart on Jules' tart post today.

- Back in October I found some Italian (prune) plums at the grocery store so I went ahead and baked this tart then.

- I made 1/3 recipe, using 6 dried prunes and 3 Italian prune plums. I didn't realize when I bought them, but the dried prunes were cherry flavored (and quite delicious!). Following Dorie's directions, the prunes are steeped for 15 minutes in spiced red wine. Then the wine mixture is boiled down to make a syrup which is dabbed on the tart before baking.

- For sprinkling on the edges of the crust I used turbinado sugar, figuring that the sugar crunch would add a nice texture.

- Once it's in the oven, I always halfway hold my breath until the puff pastry actually puffs

- I used duFour all-butter puff pastry that I had in the back corner of my freezer. Its directions say that moderate oven temperatures are best for this pastry, recommending the temperature of 375, so I baked the tart at 375 for 15 min + 360 for 10 minutes. At that point it was nicely golden and puffed around the edges.

- The pastry under the fruit didn't puff, so perhaps my tart might have needed more time in the oven. Also, syrup ran off the edges of the tart so it's possible that I was too generous with my "dabbing" of the (delicious) syrup!

- Although Dorie said to put some of the fresh plums cut side up and some cut side down, next time I would keep all of the fresh ones cut side up because their more golden color provided a greater contrast with the dried ones (which were dark). 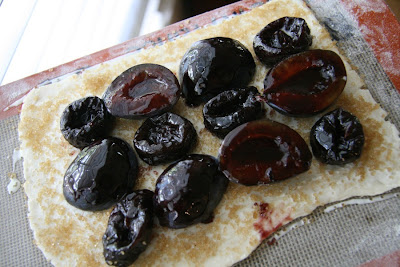 This tart was a perfect autumnal treat. The buttery crust paired beautifully with the deeply intense wine-steeped plums. My husband said it was "a gustatory delight" and I totally agree with him. We ate the entire tart in one sitting and were very regretful that I'd only made a mini tart. I'd have to say that this was one of the top fruit desserts in Dorie's book; it was just that good.

...and the second recipe for this week: 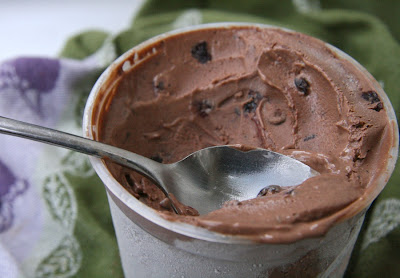 I'm not sure why this recipe's flavor combination sounds so odd; chocolate and fruit are an age-old pairing. And I've been known to toss of handfuls of chocolate-covered blueberries at a time. But odd or not, after all these years of TWD I finally know well enough to trust Dorie's instincts, so I decided to make this ice cream as she developed it.

- Laurie's ice cream post has the recipe and her reflections 4 years after starting the TWD group. Head over there and check it all out from the original TWD member!

- This was the kind of ice cream base that after an overnight in my fridge turned pudding-like and too thick to churn. I think this probably comes from using so much chopped chocolate. I guess the solution might be to not chill the base quite as long, and/or stir in preserves (and alcohol if you use it) before putting the base into ice cream maker rather than afterwards, as the recipe directs.

- My blueberry preserves had whole blueberries in it. I was hoping that they wouldn't turn into icy pieces as they froze but luckily they didn't.

- Per a tip from ice cream guru David Lebovitz, I added 1.5 T kirsch liqueur to improve texture of the ice cream and add a subtle fruity boost.

- This is a small-yield recipe; it made a heaping pint of ice cream

The blueberry is subtle in this ice cream, providing a hint of fruit to the intense chocolate flavor. The bits of blueberry in my preserves provide little fruity punctuation and a fun textural note.
Posted by Nancy/n.o.e at 6:41 PM

Ciao ! I wouldn't know which one to choose but as the tart it's gone ...

All this information is making my head spin...I am thinking there is no way I would get either of these right so maybe I will just refrain this week after all...lol. No Italian plums in sight of course at this time of year...and I do have the ingredients for the ice cream, but the spirit has not moved me to be so inclined, so not sure if that will happen either. You are so good to think of all this prior to assignment so that you have ingredients available. Great job...it all looks wonderful!

I'll have to try the ice cream when it warms up. I agree that it sounded like an odd combination.

Nice work on both.