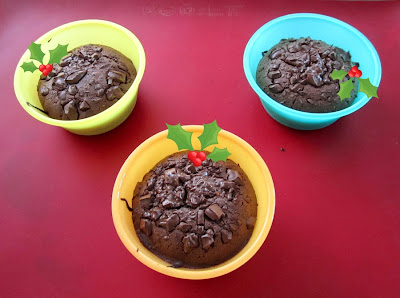 When I baked these back in November I didn't think to photograph them in a holiday setting. The clip art holly sprigs add a festive touch, don't you think?

We're within a week of Christmas so the top brass at Tuesdays With Dorie headquarters have given us TWD bakers a bit of a break from our normal routine. Instead of baking an assigned recipe, we have a "rewind" week: we each choose a recipe from Dorie Greenspan's book Baking; From My Home to Yours that we did not bake at the time the recipe was originally chosen for the group (or revisit an old favorite recipe).

There are a couple dozen recipes that were chosen in the early days of TWD, before I joined the group. I've been very slowly trying to bake some of those recipes on my own, so that I can - eventually - say that I've baked every single recipe in the book. Such is the case with Dorie's Gooey Chocolate Cakes, which I baked in early November when I was stuck at home waiting for repair people and it was chilly and gray outside: perfect baking conditions!

- This recipe is Dorie's take on the craze for molten/lava chocolate cakes. You can find the recipe on this blog post from the early days of TWD on the blog Lemon Tartlet.

- I made 1/2 recipe and used silicone mini cake pans, similar to these. Because the pans were silicone, I didn't need to butter or flour the pans, and after they were baked the cakes slipped right out.

- The timing is critical in this recipe. Because the cakes are supposed to end up being liquid in the center, doneness tests don't work. You have to use your timer and trust that it will all come out correctly. In my case, however, the cakes didn't end up molten. I was baking in a different oven from my usual, so it might run a bit hot, or I might have baked a minute or two too long.

- Although my cakes were not totally molten in the middle, they were soft. I served them with whipped cream, which melted into the warm cake in a most appetizing fashion. 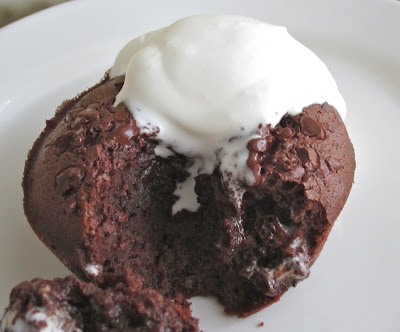 These were perfectly portioned little cakes, and even if they weren't exactly gooey inside, they were soft-ish and quite good. This recipe is ideal for instant-gratification: the cakes are not too difficult to put together, have a short baking time, and are designed to be eaten hot. Win, win, win!
Posted by Nancy/n.o.e at 12:37 AM

I do like a yummy Lava Cake. But I also love a soft moist brownie cake. These are yummy any way you cook them!

Wow, these look like the perfect thing to curl up with. I love the look of the moist texture!

These look so fudgy and delicious - like chocolate Christmas puds.

I love the holly. =) If I remember right, my cakes didn't end up very molten either. But cream makes everything better, right? =)

Mmmm I love this one but haven't made it in ages. Your cakes look lovely in their little silicone pans and are the push I need to try these again! Hope you have a Merry Christmas!

This is one of the recipes that I've not yet made. Thanks for the timing tips!

What a perfect cake for a rewind! I love it! They look so festive and tasty! Thank you for all the comments you have made over the years with TWD. I am glad I got to know you!

Delicious! I never tried these either. I might have to now!

I love the holly clip art! Looks pretty sinful even without a molten filling.

Truly festive and delicious cake which i haven't made it. I ever saw moist brownie cake with vanilla ice cream after lunch/dinner in almost celebration.