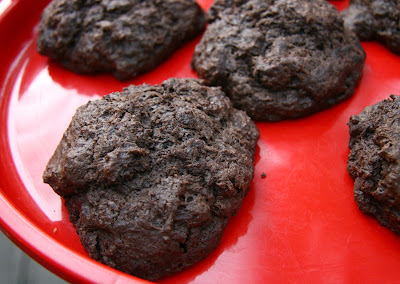 In the past few months, chocolate recipes have been scarcer than hen's teeth in the baking lineup of the Tuesdays With Dorie group. We've enjoyed a wonderful selection of seasonal fruit-based recipes; there's definitely been no lack of apple and cranberry sweets. But a little chocolate is good for the soul, so I was happy to see this week's selection, Devilish Shortcakes. I've never heard of chocolate shortcakes, but I was willing to give them a try!

- We can thank Tania of the blog Love Big, Bake Often for selecting the shortcakes this week, and her post contains the recipe.

- I halved this recipe, and ended up with 6 large shortcakes. I think that next time I would make smaller ones, like biscuits.

- To boost the chocolate flavor of this recipe, I used Double-Dutch Dark Cocoa powder from King Arthur Flour.

- The recipe comes together easily (Thank you, Tania). Although Dorie prefers to use her fingertips to combine the flour and butter, I have much better luck using a pastry blender.

- I gave a little taste when these came out of the oven and discovered that they are actually not very sweet or assertive in flavor; so I made a quick compote with frozen blackberries to serve as a filling with sweetened whipped cream.

I love serving shortcakes to my book group, because we can all assemble our desserts to our own tastes. These shortcakes were not a rich chocolate dessert in themselves, but they did make a lovely vehicle for filling and topping. They could definitely take a warm chocolate or caramel sauce but I was glad to go the fruit and cream route.

Blackberries are my favorite fruit to combine with chocolate. The mild cakes paired nicely with the bright acidity of the blackberry sauce, and the whipped cream unified and smoothed out the flavors. The shortcakes were generally well-received, although many of us had half a cake because they were so large.

Ginger Peach Shortcakes
Strawberry Shortcakes
Posted by Nancy/n.o.e at 12:01 AM

Thanks for all your suggestions--will make them tomorrow. Have a great day,

Lots of good tips here. Anything that's a vehicle for chocolate or caramel sauce is okay to me. I'll probably make these over the holidays.

Hmm, I bet the shortcakes were nice with blackberries and I really like what you said about how nice they are to serve to a group because each person can assemble her own.

Still smiling over our evening together in Connecticut. xoDorie

yes, these were an interesting change from the fruity things we've been making. didn't all-out satisfy my chocolate craving, but they were tasty. glad your group enjoyed!

Looks wonderful! Love the idea of a chocolate sauce - yummy! :)

I don't usually think to pair blackberries with chocolate. I'm going to have to try that. It looks really yummy.

Your shortcakes look lovely. A little chocolate was a nice change from the fall desserts, wasn't it?

I paired mine with blackberries, too, and thought it was an excellent combination.

I have decided to limit my actual visual consumption of this recipe as I have a touch of the flu and believe me, a non-chocolate lover, these photos this week are not helping things here. Will I make them? Too soon to tell...the guys would probably enjoy them and if I serve them with whipped cream and raspberries I can at least have some cream and raspberries, right? Book club is such a good thing, in so many ways!

I agree Nancy - I have never much luck when I use my fingers to cut in butter so a pastry blender is a useful tool. Your shortcakes look wonderful! It was nice to have a chocolate recipe in the lineup again :)

Nothing wrong with chocolate. These were not sweet at all. The sweetness was in the fillings. I did find mine to be a little dry, but the ice cream solved that little problem.

I know your book club enjoyed them.