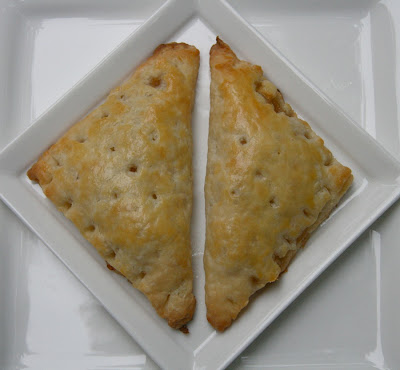 Now that schools are back in session and the calendar page has turned to September - or is halfway through September! - a little craving for apple desserts starts to set in. Luckily, this week for Tuesdays With Dorie (an online group of a couple hundred individual bakers around the globe get together virtually and bake one recipe a week from Dorie Greenspan's book Baking From My Home to Yours) Julie of Someone’s in the Kitchen picked Flaky Apple Turnovers. You can find the recipe on pages 316 and 317 or on Julie's turnover post.

I've made apple turnovers before, back when I was in another baking group, Sweet Melissa Sundays. That recipe was based on purchased puff pastry (although homemade puff pastry would have been a delicious, if time-consuming alternative). Dorie's recipe, on the other hand, promised a flaky crust (it's in the recipe title, see?) from a fairly simple handmade pastry dough that had lots of butter and sour cream. I was interested to work with this dough, as it seems like a versatile and useful pastry to have in the baking repertoire.

- The dough is fairly quick to put together. Everything is done by hand. Dorie gives a couple of alternative methods for working the flour and butter together. I grew up using a pastry blender and also two knives when making crust, but I'd never tried rubbing butter into the flour using just the fingers.

- I wanted my butter to be as cold as possible (as that is so often the key to flaky pastry) so I put it in the freezer while I was measuring out all of the other ingredients. By the time I went to cut in the butter into the flour, it was too cold for my pastry blender to make much headway. I decided to try the finger-rubbing method and it worked beautifully.

- When I tossed the sour cream into the dough, it pulled together beautifully. I was a little worried that my dough might be too wet, but it rolled well - as long as it stayed cold!

- This was my first time turning and folding pastry dough (although I've done it with bread dough). Dorie's instructions are so clear that it was easily accomplished.

- I was tempted by Dorie's suggested filling variations, but decided to stick with classic apple for the first time I made the recipe. I added a pinch of salt and a grating of nutmeg to the cinnamon, sugar and apple filling. Since there was a ton of butter in the pastry I skipped the dots of butter in the filling.

- When it came time to roll and form the turnovers, instead of cutting rounds, as the recipe specified, I decided to cut squares. That way I could use all of the rectangle that I rolled, with no leftover scrap pieces. I was able to form 6 turnovers - triangular in shape. I used a serving fork to make wide crimps in the edges of the turnovers and to prick holes in the tops. Although the recipe calls for a sprinkling of sugar on top, I used only the egg wash because my husband (the apple dessert lover) prefers no sugar crust.

- 4 turnovers went directly into my freezer; when the apple dessert mood strikes I can pull them out and bake them frozen.

- My turnovers needed nearly 30 minutes to bake to a golden color, rather than the 20 that the recipe prescribes. They puffed a bit and looked like little golden pillows. And the crust? Nice and flaky! 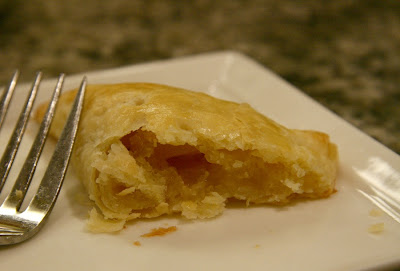 These were nice turnovers. I thought the apple flavor was a little mild; next time I'll amp up the spices. I'd also like to try the turnovers with dried fruit, nuts and/or jam, as Dorie suggests. The pastry was crisp and flaky, and I think it would also be good (without the sugar) as a basis for savory turnovers - mmm, spinach and cheese!

My husband, the apple-dessert lover , thought the turnovers were good, almost-great, but for him they were a bit overshadowed by the homemade vanilla ice cream that I served alongside.

Thanks, Julie, for choosing such a fun seasonal recipe for us to bake this week!
Posted by Nancy/n.o.e at 12:02 AM

Nancy - LOVE the triangle.... thought of that after I made my Hostess Pie-shaped turnovers. :) You really captured the flakey filling... and yes, I thought the apple was a bit "shy". Raspberry jam was so much better. Good idea about the spices - maybe that will be the trick. I've made another batch of dough - in the fridge - since these went over so well at work. I'll do the triangle thing next time for sure - love the photography!

You've done a great job on those Nancy! Flakiness, pretiness and all!

I'm sure the dog really enjoyed the crumbs of this one! LOL

Your turnovers look amazing Nancy! Looks like they got puff to me and that flakiness is amazing! Love how well the photo captures the flakiness. My first attempt at the dough failed so I'm off to try again. Great job with yours :)

What perfect triangles! And yours are so flakey. I'm jealous. I really really really messed mine up this time. There was a reason for so much butter in them, right? Butter makes for flakey, which mine are not. Hope you are having a good week! I want to try one of YOUR apple turnovers!!!!

I love the triangles. I made 1/2 triangles and 1/2 circles. I wished I'd made all triangles because it kills me to waste that dough! I didn't make apple, but I'll make a note to amp up the flavors when/if I do make these with apples. They're lovely.

Like those triangles even better now that I see them on that square plate...brilliant! They look perfectly browned and puffed and the inside...well, perfect! Great job on this one for sure.

Great job on using all the dough and not leaving any scraps! I should have made this, but there was just too much going on. I also love that you can freeze them and bake from the freezer.
Your crust looks nice and flaky. I bet these were good, perfect for the rainy, fall weather we have been experiencing.

I could see heightening the filling flavours so many ways. Your turnovers look very flaky and inviting! Glad you enjoyed.

These turnovers look awesome. I love the triangle shape too.

The turnovers look wonderful. Great idea on making squares. I put a bunch in the freezer too because the idea of having these whenever I feel like it is nice.

Im glad you liked them. They sure look great! I really enjoyed this recipe and will make them again!

Yeah! So glad it was enjoyed. I knew that someone would appreciate the ease of scaling the recipe down. ;-) Thanks for baking with me!

Yours are so perfectly flaky. Mine tasted great, but they didn't achieve such supreme flakiness as yours. Great work.

They look wonderful! And I concur on spinach and cheese. I once had a butternut squash and caramelized onion turnover that I have been dying to replicate...but have I tried. Noooooo.

i did triangles too! it's the way I have done them in the past so I grabbed my little pastry cutter wheel thingy and just did squares..though i forgot and did 4" not 4.5 so I wish I did larger ones to add more filling!

I also added nutmeg/allspice to the sugar-cinnamon..make it more apple-pie like...and I just can't do an apple recipe like this sans nutmeg.

Loved the recipe..and I can always count on you to tell me how to scale it down! So thanks yet again!

So pretty and no waste!

I agree with you about amping up the spices. Yours look very neat and tidy.

Interesting blog. I'll be back.

Hmmm... My pastry was very soft and not crisp at all... Perhaps the yogurt I used was the culprit. I'll have to give them another go with the sour cream. I think the dough definitely could have used a pinch of salt... Beautiful turnovers!

Well of course they were overshadowed by homemade ice cream! You and your ice creams... :) I amped up the spices and used raisins, and I can tell you - that makes all the difference. Yours look pretty darned wonderful without though!

oh, your turnovers are stunning. simply gorgeous. i'm making mine BIG next time, calorie concerns or not:)

They look perfect - that is some great flakiness you've got there! Good call making triangles; I had a little trouble folding my circles. We LOVED these. I kind of went in without any particular expectations - just wanted to get the darn things done - but we ended up thoroughly enjoying them. I like your ideas for amping up the spices and adding some things next tim around!

I love your presentation of the two turnovers on the square plate.

Yes, I see many variations of goodness for the filling to this flaky crust. But, ooh, I hadn't thought of savory and spinach/cheese sounds de-lish!

Your turnovers look perfect, what a great idea to not waste scraps, though the scrap dough did roll out and bake quite well (I was surprised). It sounds like the hand mixing method really helped the dough come together, I thought it would make it too warm, but I guess it needs it.

Great looking turnovers !!! You are right we should try them savory !! And lighter if ever possible !!

Your turnovers look yummy. I did triangles, too. To me, turnovers are supposed to have corners. =) I want to play around some more with different fillings when I have a chance.

homemade ice cream can overshadow just about anything! Glad the turnovers turned out well

I cannot believe I am just getting around to your turnovers. Triangles on a square plate - perfect. They look so flaky and delicious.

Definitely a keeper here. Thanks for all your advice on EVERYTHING baked.

Beautiful job - I think triangles are the way to go!