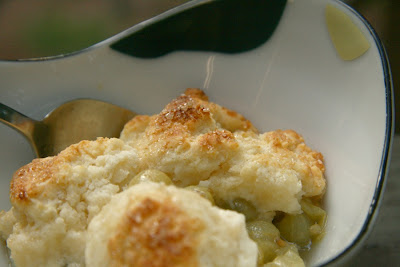 Summer is over, or so I hear. With the passage of Labor Day everyone starts to mourn the end of Summer and/or welcome the arrival of Fall. Well not so fast, is what I say! According to my calendar Fall doesn't arrive until 5:18 pm on September 22, 2009, so Summer still has a bit of breathing room (not to mention the hot weather that will last in these parts well into football season).

So, Summer it is, and nothing says "Summer" louder than a cobbler for dessert. And gooseberries, apparently, although I'd never tasted a gooseberry until last month when I scooped up two small containers at a wonderful farmer's market/Whole Foods hybrid store [edit to explain: Whole Foods took over a local international/farmer's market chain called Harry's, which resulted in this combination store, with regular Whole Foods products plus lots more international food and unusual produce than a typical Whole Foods] about 20 miles from my house. (I'd been obsessed with gooseberries for the better part of the summer - ever since Pinkstripes baked with them here so I was very excited to finally spot some around here!) I had 10 days by myself in August which was the perfect time to experiment with my bounty. I knew that I wanted to bake a Delia Smith's recipe and finally settled on her English Gooseberry Cobbler.

Delia also has a recipe for Gooseberry Ice Cream, which sounds delicious; in fact she suggests pairing the ice cream with the cobbler. That's when I realized just how tiny my containers of gooseberries really were. I was going to need both containers just to make a partial recipe of cobbler. There would be none left to churn into ice cream. I nearly drove back to the market, but that hour-long errand just for more gooseberries -for ice cream to go with cobbler that I would be the only one eating - sounded a little crazy even to me. But I have to say that I really kicked myself when I couldn't find a single gooseberry at the market the next time I shopped there. 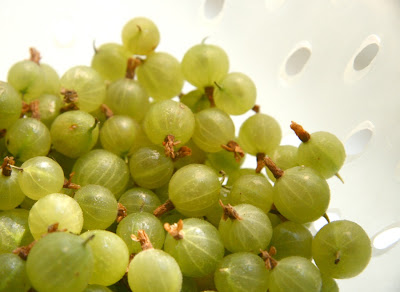 The gooseberries were not the only common-in-the-UK-but-unusual-in-my-neighborhood ingredient in the cobbler. Delia's recipe also called for "elderflower cordial." I had no earthly idea what it is, but thanks to wikipedia, I learned that it's a kind of soft drink made from (what else?) elderflowers, and more importantly, that Ikea produces and sells an elderflower cordial. This was terrific news because Ikea is just minutes from my house. I made a beeline for the store and sure enough there was a lovely (tall) bottle of elderflower cordial in the Ikea food market.

- Gooseberries are about the size of blueberries, but require a bit more maintenance. They have a pointed end and a stem end, and both must be removed from each berry. I've got to say that it's might tedious to "top and tail" the gooseberries. I started with a knife but found it faster and easier (but still not enjoyable) to just pull the ends off with my fingers. I was very grateful that I was not making a full recipe!

- 1/3 of the topping recipe was perfect for my little mini food processor. The cobbler topping was very similar to a cream biscuit. There was no sweetener in it, just a sprinkling of sugar on top. 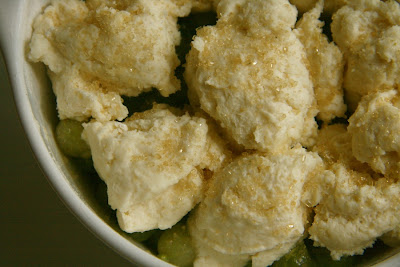 The cobbler was delicious and tasted like Summer itself - very fresh, intense, almost grassy flavor. It was not very sweet at all, which I quite liked, but if you prefer a sweeter taste I'd recommend that you add sweetener to the biscuit topping. The tartness of the fruit played nicely off the crumbly plainness of the biscuit, but it also needed cream of some sort to mellow it out - ice cream, whipped cream, pouring cream. In fact, the cold sweetness of ice cream was perfect counterpoint to the tart berries and warm biscuits. 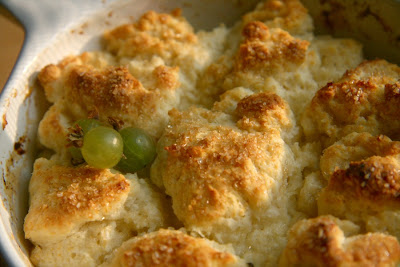 I have never had this fruit, but I am sure it is delicious. Looks yummy !

So how do they taste on their own? I seem to remember them being sour when I had them off the bush as a child. But maybe I ate immature ones.

This looks wonderful! I'm a little obsessed with the pink currants I saw in Whole Foods (mostly, I confess, for their color) but other than jam I could not find anything appealing to make with them...I wondeful if they'd make a good cobbler.

I love how you've found all these British chefs and bakers to learn from. I think I need to go to IKEA and buy some e.c., if only because the little old ladies in the cozy British mysteries I read are always drinking it! And a Whole Foods/farmer's market Green with envy.

Gooseberries. That's something I'll never see in my neck of the woods (come Whole Food, come!). This looks heavenly Nancy! I LOVE the pattern on the berries - they remind me of little striped beach balls. Perfect for summer - almost like white grapes. What a great "end" to summer. I hope the dexterity comes back into your fingers... I can only imagine de-stemming each and every berry.... well worth the effort though!

That looks amazing! You've convinced me to snap up gooseberries if I ever see them at the market. I say take advantage of summer produce (and make yummy summer dishes) as long as it's around.

Whole Foods had gooseberries and I almost bought some. Now I am wishing that I did--this look delicious!

I love gooseberry jam. My grandfather always used to kid around and call it chickenberry jam or duckberry jam or turkeyberry jam, etc. you get the drift. We thought he was hilarious when we were young. I love the look of gooseberries with their little green and whiteness with the little stripes. Just so cute. Your cobbler looks absolutely wonderful!

Interesting. I've never tried gooseberries, but I do like tart things. And cobbler sounds good--I don't think I've made one all summer. I'm curious--what's the name of the place where you got the gooseberries? We just had a new place open pretty close to here called Sprouts that sounds a lot like what you described. I haven't gotten over there to check it out yet, but I'm curious.

This dessert looks so good - it made me miss summer even more.

The cobbler sounds fantastic, but so does the ice cream. Have you tried gooseberry jam? You must have, with your jam/jelly collection.