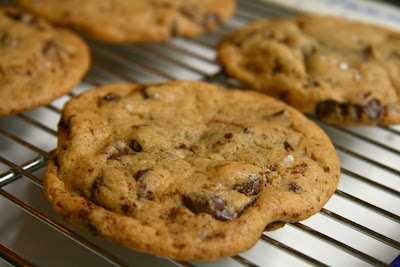 Last summer the New York Times made quite a stir in the baking world when it published an article about Chocolate Chip Cookies with an accompanying recipe. The claim was that these cookies, based on those of Jacques Torres, were no less than the best chocolate chip cookies ever.

Earlier this week there was a lively discussion amongst my fellow baking Twitterati about the New York Times cookies, and a bunch of us decided to do a virtual NYT CCC bake-along. I wanted something chocolate-y to serve to my book group (to go along with apple turnovers) so these cookies sounded perfect - and would knock a recipe off the "to bake" list.

- One of the biggest keys to success with the NYT recipe is to mix the dough at least 24 hours, but preferably 36 hours, before baking time. I mixed the dough on Wednesday morning, and baked the cookies Thursday evening - about 30 hours later.

- The NYT recipe can easily be found by Googling.

- This is an all-butter recipe, as opposed to my standard recipe which is 2/3 shortening, 1/3 butter.

- Although a full batch makes a big bowl of dough, the yield is only 18 cookies. 5 inch cookies, that is! Although the huge cookies sounded intriguing, I made 1/2 batch, and portioned my dough a bit smaller than the recipe specifies. I needed to have enough for 7 book group members and more to pack up in a box for my mom's bridge group.

- The NYT recommends using flat discs of chocolate. I wasn't going to make a special chocolate run, so I foraged around in the chocolate drawer. I was happy to find Ghiradelli baking pieces, which are actually small flat disks, and an assortment of bar chocolate. I used some of the baking pieces and some chopped Newman's Own dark chocolate. Both of the chocolates were around 72% cocoa. One thing I liked about chopping chocolate is that the dough ended up with all sizes of chocolate - from tiny bits to biggish nuggets.

- The recipe calls for coarse salt in the cookie dough. I have some very coarse sea salt, which is what I used. Additionally, salt is to be sprinkled on top of the cookies just before baking (this was included by the NYT based on a tip by Dorie Greenspan.) I scattered fleur de sel pretty sparingly over the cookies.

- 1/2 batch of dough yielded ten 2 oz balls (which were big cookies) and ten 1.5 oz balls (which were not small). My cookies all spread while baking, so I ended up with thin and chewy cookies, which are my very favorite type. The funny thing is that both amounts of dough produced cookies that were around 4" wide.

- These cookies are definitely better the sooner they are eaten. I think that's because they are butter based - they get a bit dry the following days. 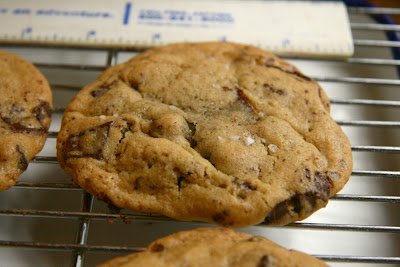 The comments of my tasters mirrored the nearly-universal acclaim these cookies have recieved since the recipe was published:

AT: "I"m not getting into 'good, better, or best,' but this is a really delicious cookie"

The biggest issue of discussion was the salt. Our book group likes salty food, but we waffled about the salt in these cookies. AT liked the salt at first, then wondered if it was a bit much. Her husband, JT, said "I like the salt piece." I think the coarse salt in the dough was a bit aggressive. Every couple of bites there'd be a little salt pocket, and I decided it was distracting from the wonderful texture and chocolate flavor.

I brought the leftover cookies to my mom and put them directly in her freezer to wait for bridge day. She thought they looked delicious, and I wouldn't blame her if she sampled one or two before the card game - I know I would!

And here's where I need to make a pronouncement about these famous cookies. I'll admit that the NYT cookies are worthy CCCs. Spectacular, even. At the same time, maybe I'm a creature of habit, but I did miss the subtle complex flavor of my usual cookie. Oh, and there are just a few more chocolate chip cookie recipes that are begging for me to try them. So the quest will continue, but in the meantime I have two great recipes that I'd proudly serve. 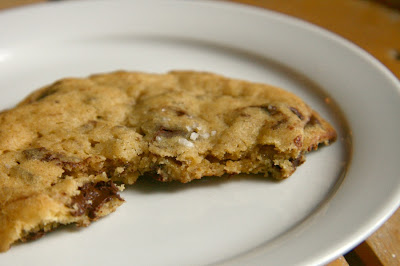 I don't know....whenever I try a new chocolate chip cookie recipe I always end up thinking, "why mess with perfection?" I think the old tried and true Tollhouse cookie is tough to beat, but I use shortening instead of butter in just that one particular cookie. I grew up with it and I looooove it. : )

Beautiful cookies Nancy! I love reading your posts, they're always so thoughtful and thorough. I'm glad these were such hit with everyone! I used finely ground sea salt in my dough and coarse on top, so I didn't get the inner salt pockets, but I can see how that could be distracting. For now, I am definitely content with this recipe. Curiosity may get the better of me, but a bad ccc is one of the bigger disappointments in my opinion :) Of course if you make another ccc and give it rave reviews, I'll have to try it. I certainly don't want to be missing out on higher ccc perfection!

They look great! AND, ahhhemmm...you are the ring leader always on what we bake that day...LOL. It was YOU who said, "I'm going to bake these, does anyone else want to bake them, too?" Of course, you had no trouble rounding up a group of select bakers for the task. Thanks, b/c my family LOVED these, and so did about 30 swimmers. I will make them again. Your photo is great. Major worry next week is will I finally make the Grilled Peach Salad for the NN post, or will it be the Guac???? Choices, choices. And, I still haven't gotten to the lemon curd ice cream. Will you slow down PLEASE??? LOL. Just kidding on that part.

I know what you mean. I thought these were definitely amazing, but there was just something missing. Not a big something, but I think you're right about the complexity. Not that these aren't flavourful, but maybe they taste cleaner and more buttery? Hm...I don't think I'm making sense now..haha. What I do love about this cookie is that it is drier and not so soft and how much they spread out.

How uncanny.... I have measured and prepped everything last night for a chocolate chip bake today! (Everyday Food Oct. "the ultimate chocolate chip cookie" recipe). And how interesting, I've been reading about chilling cookie dough prior to bakin (which I've never done before) - I actually printed out the NYT cookie recipe last week (from another blog) - and was going to make it, but totally forgot! I'm glad you use shortening, it's a lost "fat" - it has its place, and to me, is. Ok, now I"m going to have to make these.... but i AM going to chill my "ultimate" dough ahead of time - and see how that works. Thanks for the great "tips" Nancy! I'm sure your mom will love them - my mom has plenty of my baked goods in her freezer as well!

I was going to make these last summer and never got around to it! Can't believe that I missed out on the bake-along with these guys. I am definitely going to have to make them. I am intrigued about the salt and everything else. They look beautiful Nancy!

Your cookies turned out great! I loved these cookies. You get wonderful comments from your book group.

I love the comments and discussion by your tasters! I have got to try these...without searching for special discs of chocolate! thanks for all the research!!!

Your cookies look great. What a wonderful, lively discussion. I don't think we will ever stop searching for the best chocolate chip cookie.

As I think I mentioned to you, I've only ever made a GF version of these, but yours look fantastic! I must admit, I'm a large chunks of salt on my cookie person; I really like that pop every couple bites, but I can see how not everyone would. Dang, gonna have to try to make these now (or whenever I get a chance to breathe!).

Wow, they do look great, I love the salt factor. If you need a judge.. feel free to send me a few samples from each batch! ;-)

I love reading your posts about different recipes for the same dish/baked good. I still haven't tried the NYT recipe, but should. It's been a while since I baked regular chocolate chip cookies.

This recipe is one of my top 3 favorite CCC's. What a fun thing for ya'll to do. I make these all the time, though I don't always chill the dough for very long.
They look great. People think I'm some kind of baking queen when I share these. I sometimes only bake them with about 1 ounce of dough.

Jacob has requested CCCs, but since he wants them for dessert tonight, I think I might have to go with your usual recipe. These look wonderful though, and I look forward to seeing what all the fuss is about!