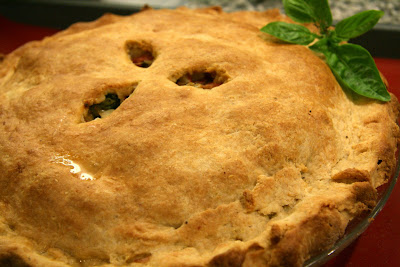 I included yellow squash in my veggie order last week, trying to catch the last of the summer produce. I figured that I'd find something to do with it once it arrived. Some quick research turned up a few appealing possibilities, but I finally settled on this recipe from August's Gourmet - a vegetable pie that features yellow squash. (I've also included the recipe with my notes at the end of this post.) I had all of the ingredients, with the exception of okra. Most of the online reviewers substituted green beans for the okra, but one lone cook opined, "your loss if you leave it out." So, I bought some. 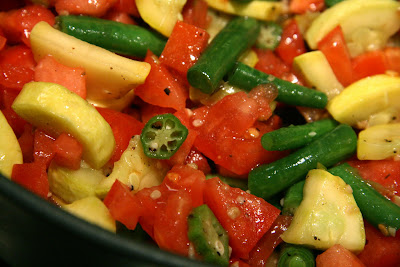 You bet I cut that okra into really small pieces!

- I only had a pound of squash, so I made up the difference with green beans.

- I used gruyere for some of the cheese because nothing says "savory melted cheese" quite like gruyere.

- I sprinkled some extra cornmeal and also some flour to absorb juices as the pie cooked. It still bubbled over.

- The recipe advises 45 minutes of active preparation time, and 2 hours start to finish. Lies, all lies! I started cooking this around 5:00 pm and pulled it out of the oven at 8:15 pm. We ate it without waiting for it to cool the recommended 15 minutes.

- Cooking this pie meant lots and lots of chopping, and many different steps. Plus, I got every bowl, pot, pan, utensil, and countertop in the kitchen dirty (3 bowls, 2 colanders, 3 pans, food processor, knives, measuring cups, grater, etc., etc., etc.) While the pie baked I did have time to hack away at the mountain of dishes.

- The crust was not very pie-like but more like a thin, firm cornbread layer - it had a hollow sound when I tapped the top. I'm not sure if this is how it was supposed to turn out or if I over-processed it (possible) or over-handled it (I was pretty careful about that), or that I'd included some whole wheat pastry flour (maybe). It tasted good though.

- Although the recipe said to let it cool at least 15 minutes, we dug right in. It was 8:15 and we just weren't going to wait another minute for dinner. I'm not sure the waiting would matter. I served it accompanied by... a glass of wine. It was late, I didn't want to prepare one more thing, and I reasoned that the pie had everything anyway: carbs, protein, and nearly every vegetable known to man. 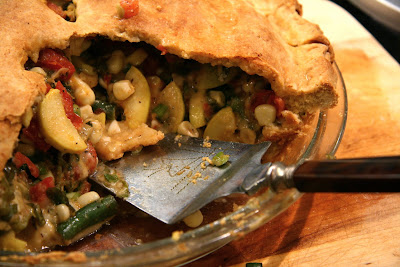 Luckily, all the effort was worth it. We loved this. There was a ton left over, so we ate it for the rest of the week! I did manage to add some salad for the leftover days.

All the flavors melded together and nothing dominated. The cup of basil seemed like so much when I stirred it in, but along with the cooked + raw scallions it gave a great taste. I'd definitely add the full amount of eggs next time. They were great in there and help make it a "one pot" meal. A spinach salad with some citrus would be great on the side.

What I really like is how unusual this recipe is. In a million years, with a million typewriters, I'd never be able to think up this combination of ingredients and steps. It was a total change from what I usually cook. And it was so delicious! 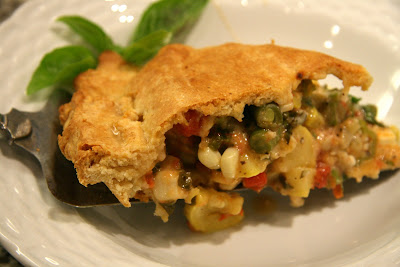 - The green beans were a great addition/ substitution for part of the squash. They should be added to the saute pan a few minutes before the squash and okra, though, because they take longer to cook.

- Cooking this was a lengthy process, so I won't be making it frequently. But it's great to have in the repertory. It makes a pretty huge pie, which was almost a problem for the 2 of us. Three dinners of the same thing in a week can be problematical around here (and I didn't think it would freeze well fully-cooked). So, next time I'd make 1/2 or 2/3 recipe. Or invite company to join us!

- Doing the recipe in stages in advance would help spread out the work on this recipe. Chopping ingredients, cooking the veggies, shredding the cheese, boiling the eggs, making and chilling the dough, could all be done early.

- I'd be tempted to cut out the crust and bake this casserole-style with a buttermilk-cornbread- biscuit type topping, but my husband really enjoyed the crust just as it was.

Make filling:
1. Place a heavy baking sheet on middle rack of oven, then preheat oven to 400°F.
2. Toss squash with 1 teaspoon salt, then drain in a colander 30 minutes. Pat squash dry.
3. Cook scallions (except greens) and garlic in oil with 1 teaspoon salt and 1 teaspoon pepper in a 12-inch heavy skillet over medium heat, stirring occasionally, until golden, 4 to 6 minutes. Add squash and okra and cook, stirring occasionally, until vegetables are crisp-tender, 7 to 9 minutes. Remove from heat and stir in tomatoes. (add beans a few minutes earlier, while garlic and scallions are still cooking)
4. Transfer to a large bowl, then toss with corn, cheese, basil, cornmeal, and scallion greens. Season with salt and pepper. (I added extra cornmeal and even sprinkled on some flour to keep the filling from getting watery. I transferred it to the bowl with a slotted spoon, leaving the juice behind)

Make crust and bake pie:
1. Pulse dry ingredients with butter in a food processor until mixture resembles coarse meal with some roughly pea-size butter lumps. Transfer to a bowl and stir in milk until mixture just forms a dough.
2. Gather dough into a ball (I then divided the dough in two, and formed 2 disks) and chill, wrapped in plastic wrap, 5 minutes (I put it in the freezer - I don't think 5 minutes in the fridge gets much chilling done).
3. Roll out 1 piece of dough on a well-floured surface with a floured rolling pin into a 13-inch round. Transfer to a 9-inch glass pie plate, leaving overhang.
4. Spread eggs evenly in crust and season with 1/4 teaspoon salt. Add vegetable filling, mounding slightly in middle.
5. Roll out remaining dough in same manner and place over filling. Trim, leaving a 1/2-inch overhang. Press edges of crust together. Fold overhang under and crimp edge all around.
6. Brush crust with additional milk, then cut 3 steam vents.
7. Bake until crust is golden and filling is bubbling, 50 minutes to 1 hour. (45 minutes, including 20 min at convect setting.) Cool at least 15 minutes before slicing. Serve warm or at room temperature.

that okra still seems just a little too chunky for me :) ... otherwise, this looks incredible! And I LOVED your dishwashing inventory...I think that should be a mandatory addition to every recipe review.

btw, Nancy, you mentioned somewhere that you freeze your fresh parsley. Do you do anything special with it first or just chop and put in a freezer bag? I never manage to use the whole bunch so it would great to start doing that.
Audrey

Wow, this sounds like a lot of work, but worth the effort! I hate it when recipes lie about prep times. Be honest with us, we can take it! Funny about the okra - it was the only vegetable that my niece would eat when she was 2. Really? Okra? Well, it looks like you managed to hide the okra well. Your pie really looks great!

What a lovely veggie pie. I haven't had okra in years. The crust looks perfect.

Well... we don't have okra here (only canned and how mushy can it be ?) aside from that and yellow tomatoes I think I'll make for tomorrow night when a Spanish friend it's coming for dinner I'll let you know what comes out of it ! Ciao

I have a blog award for you whenever you get a chance to stop by! :)

That sounds really delicious! I love all the veggies (though I'll admit I've never tried okra...)

This looks delicious and definitely worth the work. I hated okra when I was little because my grandpa only stewed it and it ended up looking and tasting like gross glue. But, then I lived in dear ol' GA and learned that there are delicious ways to prepare it. My hubby loves him so fried okra. Actually we are having it tonight! Sorry, I just went on such a huge tangent. I just feel a connection with you since you live in the Peach State. Great dinner. I would love it~~

Wow!! Simple recipe but so many steps. I can understand why you won't make it often. IT looks yummy, tho'. I wonder how mushrooms would taste in it. Or eggplant.

This makes me happy, just looking at it.

Hey Nancy, thanks for the bday wishes! I did indeed have a good day. Got everyone flu shots, ate some cake that I didn't make. And David got me a kugelhopf pan! Now there's a unitasker if there every was one! Can you believe my good luck, what with kugelhopf coming up in just a couple of weeks? I also got a mystery kitchen gadget, picked out by my 6 year old. David apparently gave Jacob full run of Williams-Sonoma and told him to pick out a gadget for me, and he chose . . . some metal thing. I will have to post a picture of it on a future post so y'all can help me. I'm sure once I know what it is, I'll wonder how I ever lived without it!

I did not notice your first spelling of "cannellini;" I must have been too busy noticing all of my typos on the comments that I leave people. Or busy leaving Matt comments. Yes, I left the poor guy about 10 comments yesterday (it looked like they were getting eaten, but apparently they were just delayed). When I realized what happened, I almost left him a comment just letting him know that I'm not really a crazed blog stalker, but then I figured that the last thing Matt needed was another comment from me. This whole commenting this is just fraught with danger!

Thanks again for the birthday greetings, and have a great weekend! Cathy

Hi Audrey-
When I freeze parsley, I put it into a plastic container, just as I chop it. In other words, I don't pack it extra tight. When I'm ready to use it, it's not too difficult to scoop some out with a spoon. It works fine for everything but a garnish, I've found. As always, ymmv.
Nancy

Christine-
Thanks so much for thinking of my blog! It's so nice to receive an award, and it means a lot coming from you. I enjoy reading what you're up to also!
Nancy

thanks, as always, Nancy! It just never occurred to me to freeze it and now I won't waste as much. (I did have to look up ymmv - 'your mileage may vary' makes perfect sense. hee hee).