The Frost is on the Pumpkin 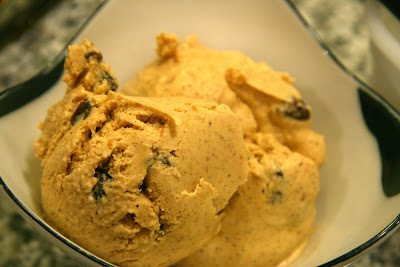 They’s something kindo’ harty-like about the atmusfere
When the heat of summer’s over and the coolin’ fall is here –
Of course we miss the flowers, and the blossums on the trees,
And the mumble of the hummin’-birds and buzzin’ of the bees;
But the air’s so appetizin’; and the landscape through the haze
Of a crisp and sunny morning of the airly autumn days
Is a pictur’ that no painter has the colorin’ to mock –
When the frost is on the punkin and the fodder’s in the shock.
-James Whitcomb Riley

I'm not what I'd call "creative" cook. Any more than I'm a creative writer. In both I'm more of an editor - I can do a decent job of correcting prose, and over the past 23 years of daily cooking, I've developed a working ability to read and change a recipe. Or combine a few different recipes. I don't have the knack for starting from scratch and whipping up a whole new dish. But this week was different!

Faced with a half can of pumpkin after making my TWD pumpkin muffins, I was inspired to make a batch of pumpkin frozen yogurt - with no recipe in sight - and this time it just turned out. My ice cream freezer is new*, and my previous attempts at frozen yogurt were spotty. But this yogurt was really tasty!

Mix ingredients through the spices in a mixing bowl. Chill for an hour, then churn in an ice cream maker.

Heat the rum in the microwave and pour over the raisins in a small bowl. When the churning is nearly finished, add the raisins - and 2 tsp of the rum - into the ice cream maker.

This made for a very creamy pumpkin and spice frozen yogurt. We loved it! I'm wondering about using evaporated milk next time, and sweetening with maple or brown sugar. So many possibilities!

what a great idea! that sounds delicious :)

I have some frosty leftover pumpkin myself. This sounds like a nice, tasty idea.

That sounds heavenly. Congratulations on the creation.

I love your first paragraph...you said that so well! Making homemade ice cream (or fro yo) is something I've always wanted to try...especially if you can create flavors that you can't find in an Edy's container.
Audrey

my goodness, what things happen when i leave the house! i am excited about the ice cream freezer!

Okay, Nancy. My bday is coming up next week. I am sending the link to this post to David with a note that says "if I had an ice cream freezer, I could make this!" I might be the only wife in the world who prefers small kitchen appliances to jewelry (well, on second thought, there are probably a lot of us here in the food blogosphere who would choose the kitchen gadget.) This looks AMAZING. I can't think of a better way to use up leftover pumpkin!

That looks so yummy, but I would never have thought of making pumpkin yoghurt. The combo of ingredients sounds positively heavenly!

Cathy, David needs to appreciate the savings that this preference of yours could mean! I ordered mine from Costco.com (it wasn't in the stores any longer) for $59. Shipping was free, iirc. The pricing varies a bit if you don't have a Costco membership, but I believe anyone can order. My biggest issue is where to store the thing. Otherwise it is absolute magic.
Nancy

Oh, and as long as I'm assisting with your birthday shopping, if you don't have a digital kitchen scale, that's a 'must' - and so slim and compact that there are no storage issues either. I use mine at LEAST once a day. I ordered mine through http://www.oldwillknottscales.com/ which happens to be THE place for all of your weighing needs. After buying the ice cream maker, the digital scale, and a dedicated spice (coffee) grinder, there was no way I was springing for a creme brulee set!

Hey Nancy, I jumped back to ask you about two of your ingredients. First, greek yogurt. I've seen you use this before. I have never noticed it in stores (but haven't really looked for it, either). It is readily available in any grocery, or do I put that on the Whole Foods list? Also, what kind of rum did you use -- does it matter? I'm thinking Meyer's Dark? Maybe any rum as long as it's not Malibu (does anyone who is not 19 and in Cancun even drink that stuff?)?

Thanks for the tips on the ice cream freezer! I seriously might have to get one this weekend - I have a "thing" for fall ice cream flavors, and your pumpkin recipe sounds like something I'd want to serve with many fall desserts. I was in Costco last weekend, darn! -- but it was primetime on Saturday at 3:00 p.m. and I had my 6 and 3 year olds with me, so I did not get to browse through kitchenware; actually, I viewed the fact that we got out of there without anyone getting hurt a success.

Thanks for the heads up on the kitchen scales! Somehow I just KNEW that there would be "the place" to buy measuring and weighing paraphernalia. I do not have and do so covet a digital one. I'm sending David that website! Hey, he should be grateful that I'm not sending him to www.tiffany.com! Yeah, in retrospect, the creme brulee torch = not the wisest purchase. I actually have not been torching things weekly, as I swore that I would do -- go figure.

Well, darn - I wished I hadn't used my whole can of pumpkin now! This frozen yogurt sounds wonderful! I'm keeping your recipe on standby, because their will be more cans of pumpkin to use up in the very near future :-)

I was just looking for something to do with leftover pumpkin- great idea!

And the kitchen scale pretty much qualifies as a necessity in my book. Anyway, the one I got was the Salter 6055 Digital Kitchen Scale/ "Add & Weigh" Food Scale, Part#: SALT-6055.

Don't kick yourself too much on the Costco thing. I think you deserve a medal for braving that place on a Saturday much less with little ones in tow. And I'm pretty sure the ice cream makers are not in the stores at the moment (having made way for other seasonal wares for Halloween, Thanksgiving, and Christmas.) I called my Costco back in Sept and the ice cream maker came up as 'discontinued' in the computer inventory.

Anyway, while we're chatting about make and model, I have the Cuisinart 'Pure Indulgence 2 qt' and it is beyond amazing.

As for ingredients, Greek yogurt is definitely a featured player at Whole Foods. Our nearby WF has Greek yogurt mixed in with the regular yogurt AND also in its own refrigerated case nearby. It comes in full fat, 2%, and nonfat.

I know that I've bought it at Publix, so your store might carry it also. It might be hiding in with the organic milk.

The most common brand seems to be Fage: http://www.fageusa.com/index.html#/products/
Another brand is Oikos, which is from the Stoneyfield people: http://www.stonyfield.com/OurProducts/GreekYogurt.cfm

The nice thing about Greek yogurt is that it is much thicker and gives a richer, creamier cooking result without adding a ton of fat. It's made with some sort of draining process so it's essentially more concentrated - more protein, etc. I think it only has 3 live cultures, however, so when I'm eating it for lunch I tend to mix it with Cascade which has 8.

On the rum front, I am the last person to ask. I use a bottle that is from my husband's Navy days - I think sailor rum is probably of a lower quality than the Cancun stuff!
Nancy

Nancy! This sounds fantastic! I've been debating about what to do with my leftover pumpkin, too. Although...I could make those muffins again. :)

Nancy, THANK YOU for the kitchen scale and ice cream machine recommendations! It is nice to have some model #s that are tested & approved! I am secretly hoping for a kitchen scale next week; maybe he'll even wrap it in a blue box -- I'd be in heaven! Good to have the info. about the Greek yogurt, too -- I'll definitely look for it. It sounds like a great way to add some richness to recipes without a whole lot of extra fat. Not that I am one to invent recipes, of course, but I sure am glad that you recipe developers are out there! Thanks again!

It's me again! I just wanted you to know that I did a Cooking Light Night post today, and linked back to your blog. Thanks for talking with Clara and spreading the word about CLN!

You always amaze me with your talent for coming up with these type of recipes! I am definitely going to try this. The pumpkin frozen yogurt is inspired. I think it would be a huge hit at Thanksgiving!

That sounds like the best possible use for leftover pumpkin that I've ever heard of. And it's going to be 80 something degrees today. Guess what I want for dessert?

Way to use up that pumpkin!! Looks good.

Matt, please try the recipe first before you serve it on Thanksgiving! I view it very much as an experimental recipe; It's still in beta testing around here. Anyway, let me know if how it works.

This sounds amazing! There is nothing better than pumpkin ice cream! I will have to make sure I work out extra hard so I can have some extra calories to eat. Trying to lose weight is hard! I wish I could find good body composition scales to help me track my progress.