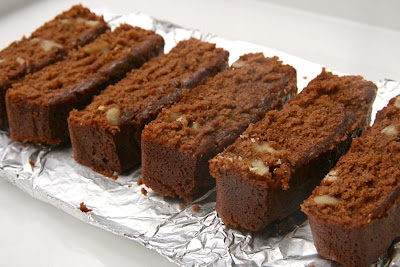 Before making this week's recipe for Tuesdays With Dorie, the Honey Nut Brownies, I had a little debate with myself. On the one hand I've never heard of honey as an ingredient in a chocolate brownie. I was skeptical.
On the other hand I like honey. A lot. In fact, I probably have half a dozen different types of honey in my cupboard. And little known fact: honey doesn't expire; it contains some antibiotic-type properties that preserve it indefinitely, apparently.
Back to the original hand, the question remained: Would honey be good with chocolate? Maybe I should cut the amount of honey and fill in with Llyles golden syrup, or sorghum, or even molasses. But that would totally defeat the intention of having honey brownies, wouldn't it? Dorie's unusual-sounding recipes have pleasantly surprised me time and again, so I decided to try the brownies as written and see.

n.o.e.'s notes:
- The brownie recipe was chosen by Suzy of Suzy Homemaker. You can click over to her post to find the recipe.
- Since I was embracing the honey-in-brownies concept, I decided to go all-in and use uber-strong chestnut honey, since Dorie said that flavor complements the chocolate in the brownies.
- I made 1/4 recipe in 3.5 x 6 inch pan, which I lined with a non-stick foil sling.
- For nuts I used walnuts, since they have a strong enough flavor to stand up to a bold honey like chestnut. 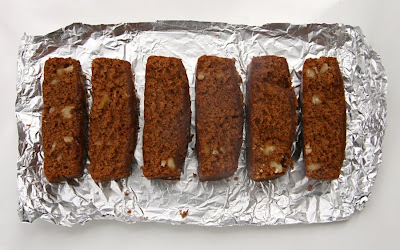 I took a bit of brownie and thought, "Chestnut honey, and...more chestnut honey." Everything else faded into the background. The brownies forced me to decide how much I really like chestnut honey. David Lebovitz says that chestnut honey tastes "brusque and bitter" and maybe that's how to best describe its strong and unusual flavor.
At that point JDE walked into the kitchen. I asked if she'd be a taste-tester. Her reaction: "I don't think they can be called brownies if they don't have chocolate." Not only was there not enough chocolate to balance the strong honey taste, the chocolate flavor was nearly undetectable. With an undeniably cakey texture, these brownies were more like a snack cake than a typical chocolate brownie.
Although the brownies took me by surprise at first, I came to like them as I tried bite after bite; they were better the second day when the flavors had settled a bit. If you like honey and you're not expecting a strong chocolate hit, you might enjoy these brownies Be sure to use your favorite honey flavor because it will take center stage.

Not enough chocolate, my word, there was plenty of chocolate in those! lol I have no idea why mine looked like the way they did, but the guys had no trouble putting them away happily. I like the way you cut yours...really a nice serving size.

Awesome! They look great. I like ur pix too.

Now you've got me wanting to remake this with a better honey. (And more chocolate.) And icing. I think this recipe has potential. Yours look lovely!

Great review and helpful tips for anyone planning on making these! They were unique and geared more toward honey-lovers.
Your brownies do look amazing though!

They sound distinctive and yet delicious!

Chestnut honey sounds interesting! I like baking with honey and usually have different varieties around but I was out and stuck with wild flower honey. They weren't super chocolatey, and mine didn't bake quite right, but there were still very interesting!

Im glad you ended up liking them. There are a lot of mixed reviews on this recipe! I enjoyed them much better today!
They sure look good!

I agree..I thought they were better the second day.

I agree - the honey flavor was really strong in these. Definitely not my favorite brownies (I didn't even post them...). Yours look very pretty on the plate!

I was surprised by how much I liked these. The honey was there but not overwhelmingly so. I think I'll be making these again.

Interesting, Nancy. I've never tasted chestnut honey. But after reading this review, I'd love to try my favorite honey in this recipe!