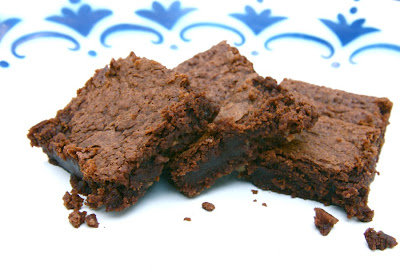 On any given day, following just about any recipe, there's a good chance that I'll make an error. Sometimes big, other times minor. There's never a guarantee that I can pull of a recipe in the way that it- or I - intend. When it happens in a Tuesdays With Dorie recipe, however, I have to admit my mistake right here on my blog. So, here's my confession: although I had my book open to page 91, "Rick Katz's Brownies for Julia" - this week's assignment for TWD - my eyes strayed to the brownie recipe on the facing page ("Bittersweet Brownies" on p. 90) and I followed that one part of the time. The result was a hybrid combination of the two recipes (quite tasty, I might add!)

- I used the quantity of sugar from the Rick Katz recipe, so I'd guess that my hybrid brownies ended up a bit sweeter than either recipe would have been.

- I did use the correct method for Rick Katz brownies, and I'm glad because it was an interesting technique, even if it did take longer than the average brownie recipe and require me to get an inordinate amount of bowls and pans dirty. 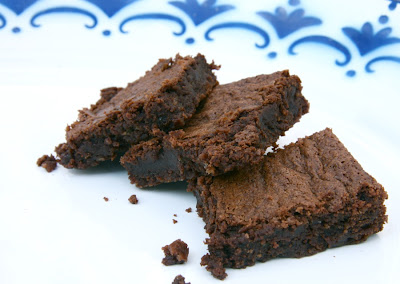 - Since the early reports were of gooey, underbaked brownies, I decided to bake some of my brownie batter in a smallish loaf pan in addition to a 9x9 pan as specified in the recipe. Even though Dorie specified a Pyrex pan if possible I used metal pans because I never have great luck baking brownies in Pyrex - they seem to take much longer to bake completely. I lined both pans with a parchment sling, in case the brownies needed a bit of help releasing from the pan.

- My brownies baked for about 28 minutes. I used the King Arthur "divot test" to check for done-ness. I have to say, this test has made all the difference in brownie baking success for me. Previously I agonized about getting my brownies to the right stage, but no longer!

Although I didn't bake the assigned brownie recipe on page 91 or the brownie recipe on the facing page, the combination-of-the-two-recipes-brownies that I did bake were quite wonderful: fully baked yet fudgy and intense in chocolate flavor! My enjoyment of learning the technique of these brownies was not dimmed by the piles of dirty dishes in my kitchen by the time I finished baking. The Rick Katz brownies sound quite good, so I will go back at some point and bake them with the amount and type of chocolate actually specified in the recipe. But in the meantime, I have a bunch of my "hybrid" brownies in the freezer, to dole out as needed.

If you would like the recipe for the Rick Katz brownies, you can find it on page 91 (not page 90, mind you) of Dorie Greenspan's book, Baking: From My Home to Yours or on Tanya's blog, Chocolatechic.
Posted by Nancy/n.o.e at 12:30 AM

I think Page 90 Brownies are a hit! Who doesn't love bittersweet "anything"! You've created a signature brownie, just think of it that way. And you really bypassed the gooey syndrome which I suffered from - nicely baked!

OMW I am laughing at the thought of you doing this b/c having cooked/baked with you for quite some time now, it is ALWAYS and adventure! Now, I also have to admit that I caught myself several times going to the wrong side of the page as well, but I did catch myself in time, so I can understand how this could easily happen. You are such a riot...I never know from day to day what the adventure is going to be. And btw, your brownie hybrid looks lovely!

What a great technician of the brownie, you make... mixing two recipes was really wise. I'll have to try your version sometimes... great going!

Maybe Dorie will contact you to contribute your hybrid brownie to her next book! Thanks so much for your help with this recipe. I am 100% convinced that my brownies would have been a disaster without your tips. Instead, they were the yummiest brownies ever :)

You're the second person I've come across that read the wrong directions for these brownies.

But the good news is that everyone has declared them delicious!

Clever woman, baking from two recipes at once! (At least they were both brownie recipes..)
Delish!

See? Isn't it great when a mistake turns into a discovery...In fact, I'm pretty sure it's how Columbus discovered America ("oops, I thought I was following map #1...")

I LOVED this week's brownie recipe...and I'm thinking my husband would love the bittersweet spin on it...hmm, I may have to try that!

Brownies in the freezer are as appealing to me as money in the bank. I love how your hybrid brownies turned out. The Rick Katz brownies were great, but I think I still prefer the Tribute to Katharine Hepburn brownies. Maybe that brownie taste off will have to happen sooner than I planned!

Don't ask me why but I'm a fan of naming the brownies - Hybrid. Must be the environmental conscience girl in me. Yeah that's it. Just go with that. HA! Glad to know the Hybrid turned out tasty!

I think it's time to rename these no-fail brownies since everyone's variations resulted in fudgy deliciousness.

How funny. =) I've made some interesting mistakes, but I don't think I've managed to combine two recipes yet. Glad to hear that you enjoyed the brownies the way they turned out.

Hehehe. Sounds like a happy accident. We liked these, but I didn't think they were worth the work.

i thought the same as tracey--dorie can put this in her next book! a new delicious invention! :)

I caught myself doing the exact same thing!! How funny! Your brownies look great, no matter which recipe they are!

Well it looks like we were thinking alike that day! I made the ing. from 90 and followed the directions on pg. 91.It is a good thing the recipe ing. were similar! Mine turned out so good and it looks like yours did too!

I certainly do love brownies and am always looking for new recipes...as we all are.

There you go, now you have your very own brownie reciep! I'll admit that I have unintentionally blended recipes as well. So glad it turned out. They look fantastic.

My eyes kept wandering to the recipe on pg. 90 too. I'm glad your hybrids turned out so well!

Nothing wrong with adding more chocolate! ;-) They look very fudgy and very delicious!

Seems several did hybrid - accidently. Glad they turned out. My errors never do.

Yum all these wonderful brownies are spurring me on to bake some more. Mine (all two batches) are long gone but I think this is the perfect time for more chocolate. I like this recipe a lot, the oooey goooey kind. I love that you discovered a third brownie betwixt the pages. hehe Have a wonderful Valentine's weekend,
AmyRuth