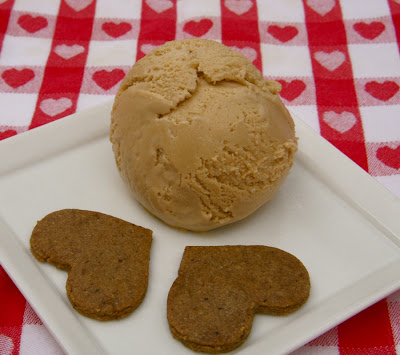 Ever since I tore the shrink wrap off of Thomas Keller's Ad Hoc at Home cookbook back in November, I've been steadily trying recipes. I've made more than a dozen things by now, both sweet and savory, but I had yet to try any of the ice creams. It was just a matter of time, given our high rate of ice cream consumption around here. But where to start? Many of the AHAH flavors sound good, but the Caramel Ice Cream seemed to call my name the loudest.

- You can find the recipe on the Wall Street Journal site, here.

- All of the Ad Hoc ice creams call for 10 egg yolks. Yes, 10! Most ice cream recipes call for 3 to 6 yolks, so at first Keller's yolk requirement seemed excessive. But a couple of factors helped me to realize that it really wasn't out of line after all. For one thing, the yield is two quarts, which is double the quantity of other recipes. Additionally, Keller explains that he assumes 15 g/yolk, and that East Coast yolks are bigger than West Coast ones (fascinating, right?), so what the recipe really called for was 150 g of yolk, which was 8 yolks in my case, producing a reasonable 4 yolks/quart ratio. I'm so excited to have Keller's yolk measurement, which I will use for future ice cream making (I usually assume 20 g/yolk).

- In some ways this ice cream was a measure of how far I've come as a baker. It required making caramel then using the caramel to make a custard. Besides fretting about the veritable mountain of dishes this recipe generated, I hardly batted an eye when making it.

- I made the caramel over medium heat and took it very slow, until it was a deep amber color.

- The caramel hardened/seized when I added the milk and cream, but I just heated the whole thing and stirred until the caramel softened and dissolved. Because the custard is strained at at several points later on, it didn't need to be entirely smooth.

- As the ice cream churned, it filled my 2 quart ice cream maker to just above the brim. It didn't overflow, but was very close. If you have a smaller ice cream maker, I'd advise a half recipe. But if you have a 2 quart machine, it's worth making the full amount. This ice cream is a bit more trouble than the average ice cream because of the caramelization step, so it's nice to have a huge yield to show for the effort.

- When fully churned, this ice cream was a softer soft-serve consistency than most. Even in the freezer, it stayed fairly soft.

- Although the recipe says the ice cream is best the first day, I found that the flavor seemed to get deeper and better the longer it sat in the freezer. In fact, it was still delicious two weeks later.

If love had a taste, this might just be it. The flavor was sweet, deep, complex, mysterious, and I never got tired of it. Additionally, the ice cream was versatile. It was good paired with cut out spice cookies (as in the picture up top), with brownies, with gingerbread, with chopped chocolate sprinkled on top, but most of all, it was perfect all by itself! I'm pretty sure this is the best ice cream I've ever churned.

I can think of nothing more elegant for dessert than caramel ice cream. The recipe looks wonderful...can't wait to tr it!

Caramel.... a favorite. This scoop looks stunning! And those cookies and cloth are the perfect setting for V-Day! I love the caramel-making process... and you're right (you can never ruin it) - just as you did - just keep heating it slow and it comes back. Beautifully done Nancy! Happy Valentine's Day!

This ice cream really was fabulous. I definitely want to make it again soon. Thanks for letting me join in on the fun!

One of my favourite ice creams!!!!

I have to try it! Thanks for all the explanations. I never measure yolks, but I usually do 4 per quart too. I have always wanted to try a caramel ice cream but never managed since I didn't know which recipe to try, now I do and I even have the book, thanks to you!

Wow, the best ice cream you've churned? I must try it, it sounds incredible. You were smart to get a copy of Ad Hoc back in November, since it's been out of stock since December (and the hold list at my library is quite long). Sounds like a cookbook worth waiting for, though.

Gorgeous ice cream Nancy! I'm jealous of how solid your scoop looks. I'm glad to hear this one is good even 2 weeks later, as mine is still sitting in the freezer untouched.

Hope you had a wonderful Valentine's Day :)

Yes, please, maybe even more than one scoop. This looks heavenly!

Mmm, if love had a taste..
I really must buy this book. (And that will be entirely your fault!)

My husband got me this book for christmas and I have been trying out recipes as well. I made the marinated skirt steak for valentines and not only was it amazingly easy but it was delicious. This ice cream is next on my list. I'm just scared of the caramel part of the process.

I completely agree all around! I still have some of this tucked away in the freezer, and I think the flavor is deeper than it was when it was fresh. It was fun making this one with you!