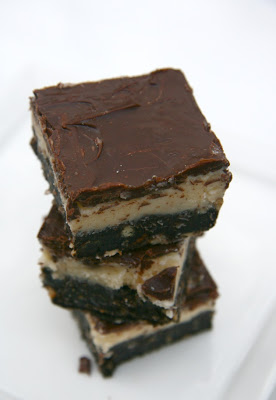 In my teens and 20's I was the world's biggest Olympics junkie. I was glued to the TV, Winter or Summer, every sport, every minute of coverage. My enthusiasm has moderated a good deal in recent Olympics, but I can still get pretty fascinated by the competitions, including curling, my every-four-years indulgence, and short track speed skating, which has just as much strategy but a good deal more chaos.

In honor of the Vancouver Winter Olympics I baked Nanaimo Bars, no-bake layered chocolate bars which originated in Western Canada about 35 years ago. I've spent a lot of time over the years in the Canadian Rockies and Vancouver, and I was always happy to see Nanaimo bars on the table for afternoon tea or dessert.

- I found the recipe for Nanaimo Bars here. It is identical to the recipe on the City of Nanaimo website.

- Although there are three separate layers in these bars, and they generate a generous quantity of dirty pans and bowls, they seem easy to make because they are no-bake. Just melt, stir, layer, and chill, and in relatively short order you have completed bars ready to cut and serve.

- My toasted almonds were nowhere to be found the afternoon I baked these bars, so I used half almond meal and half chopped toasted pecans.

- The middle layer calls for vanilla custard powder (although apparently you can use powdered vanilla pudding). I was excited to use the Bird's Dessert Powder that I'd picked up on a whim several years ago, which I hoped was the correct ingredient or a close substitute. I gave the powder a little taste and didn't detect much vanilla flavor, so I added a teaspoon of vanilla paste.

The Nanaimo bars turned out to be rich and indulgent, and quite delicious. Although they were sweet, I didn't find them cloyingly so. I piled these on the dessert platter for book group. One of my tasters, JT, doesn't even like coconut and he tried and actually enjoyed these bars. The coconut adds a nice chewy element in my opinion, but it could probably be replaced with a different stir-in ingredient, such as toffee bits (but then they wouldn't be Nanaimo Bars...)
Posted by Nancy/n.o.e at 11:23 PM

Nanaimo bars are a perfect tribute to Canada!!!! Nanaimo is a beautiful city that's for sure!

A lovely tribute to B.C., which is one of the most beautiful places in the world.
Delicious!

Olympics junkie - yes, that's exactly what I am these days! I can't get enough and watching all the coverage is really making me want to travel to Vancouver - it's beautiful!

These bars look terrific and though I've seen them elsewhere on the web recently I failed to realize they were no bake! Maybe I'll give them a try while I'm still in Olympic-mode :)

I had never heard of these until a year ago, when a friend made them for some reason and shared. They are so good and I agree, not too sweet.
They look just like I remember them.
Perfect timing to make them to celebrate the Olympics!

I really have to try making these soon, they look SO good!

These look wonderful - I think I need to try them before the Olympics are over!

These would be so dangerous here, a sure winner. I've been limiting my Olympics watching but I find my hand sometimes turns on the TV when I wasn't paying attention, and I'll stand there and watch it for a half an hour before I can ear myself away.

I learn the most interesting things over here...never heard of Bird's Powder, etc. I am obviously leading a much too sheltered life. I need to get out more and find things like this. The cookies look pretty with their layers.