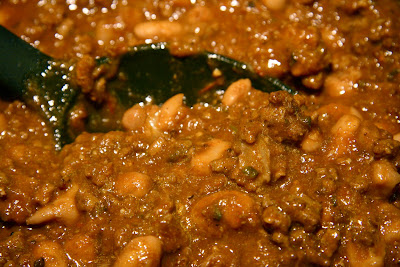 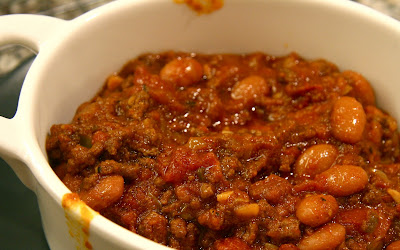 I didn't set out to have a chili throwdown. Really, I didn't. Most accurately, this is an ex post factum match-up of two recipes that were in my draft folder.

I've cooked chili over the years, but I've never had a recipe for a good solid red chili. When we were in the mood for chili, most of the time we'd cracked open a bag of Carroll Shelby's chili mix. Just add 2 lbs of beef, a can of tomato sauce, and some water, and you've got chili in less than half an hour. You can customize your chili by adding as much or as little as you want of the included masa flour (thickening), salt, or cayenne pepper. Or you can get fancy and jazz it up, adding your own extra tomato, or onions, peppers, beans, cheese, etc. We've never had any complaints about good ole' Carroll Shelby's chili. 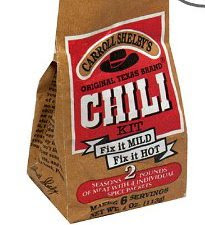 But I did want a standby chili recipe. As I've browsed the food blogisphere, I've planted various bookmarks, not to mention real paper bookmarks in some of the cookbooks on my shelves.

The one I decided to try was a Red Beef Chili recipe from the "Chili" episode of the Food Network's Throwdown with Bobby Flay. It sounded delicious (and had a bunch of rave reviews), and might be a fantastic special-occasion chili (this is not a contradiction in terms!) I made the chili back in November, but in between my trip to Germany and the holiday crush I never got it posted.

Recently another red chili caught my eye: in my America's Test Kitchen Family Cookbook there's a recipe for Weeknight Slow Cooker Chili. It sounded easy (and good) so I cooked it right up to eat alongside the Extra Spicy Corn Muffins that I baked for TWD.

When I realized that I had these two separate draft posts about chili, I decided to combine them. In each recipe I used ground beef and pretty much the same combination of chili powders, so there is actually a decent base of comparison. Throwdown time!

I will describe and give a verdict for each of the chili recipes separately and then at the end of the post, I will give an overall verdict. 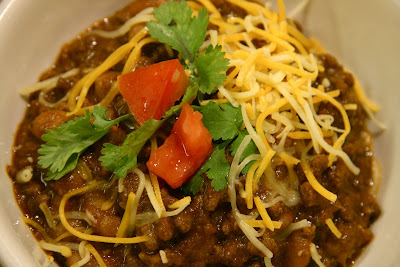 - This recipe was more complicated than I'm usually willing to cook. It called for 4 kinds of chili powder alone. After running all around town, I had accumulated an assortment of chili powders - none of which really matched what he specified. I decided to add them in, and hope for the same complexity of flavor. (I haven't seen the TV episode with his chili, but I'm guessing I was supposed to grind my own from the different chiles? Or source them at some obscure online chili powder emporium?)

- The ingredient list also includes 5 different chile peppers including prepared ancho chiles (that had to be separately pureed). I had better luck locating the peppers. 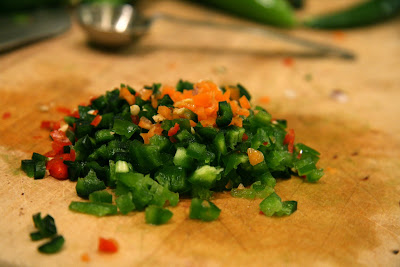 Here are the many different peppers, all chopped up and ready for the pot

- I used a 14.5 oz. can of diced tomatoes with mild green chiles, because I had one that I'd opened by mistake. I drained them and pureed them in the blender.

- I substituted ground beef for the cubes of bottom round beef. It was in the freezer. I debated buying new beef, but ultimately decided if I loved the chili's flavor then next time I'd go the extra mile with the beef.

- The chili was pretty thin so I sprinkled 1/8 c. masa flour to thicken the chili slightly 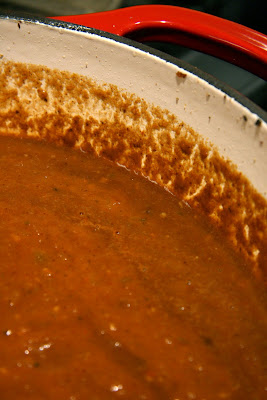 - The chili recipe doesn't call for any beans (Texas style), but we like them so I added some canned pinto beans.

This recipe took a ton of time, and featured plenty of hard to find ingredients. We liked it but didn't love it. My husband said, "in the realm of all possible chili recipes this falls in the middle." Not enough of an endorsement for me to make it again!

It could be that I really missed out by not using Bobby's formula of magic special chili powders, but here's my opinion: If, after my best efforts at several specialty stores, and every pan in the kitchen dirty, I only end up with average chili, this is not the recipe for me.

After Bobby Flay's fancy chili didn't pan out, I was back in the market for a chili recipe, preferably something just a tad easier. It took me a while before I could actually face cooking chili again, but when the savory corn muffins came up as a January TWD pick, I decided the time was right for more chili experimentation. 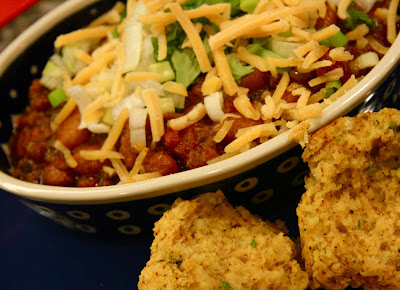 I figured if anyone was going to have a good, reliable chili recipe it would be the America's Test Kitchen Family Cookbook. This 3-ring binder- style volume has got some great basic recipes, all backed by that exhaustive ATK testing.

The biggest draw? The recipe looked good, could be made in a crock pot, and was easy. Very easy. Already this recipe had an advantage over Bobby Flay! (In the Family Cookbook there's actually another slow cooker chili recipe that's an even closer match to Bobby Flay's, but I was in the market for simple this time)

- Again I decided to use beef from the freezer. This time I had just 3/4 lb 'chili ground' beef (instead of the 1 lb that I should have had for a half recipe). The recipe specifies no leaner than 85%, because the long cook in the crock pot would toughen a leaner grind of beef. I don't know the fat content of the beef I used, but I could tell from looking at it that it was plenty.

- I didn't have any bell pepper, so used a large jalapeno in place of the half bell pepper. 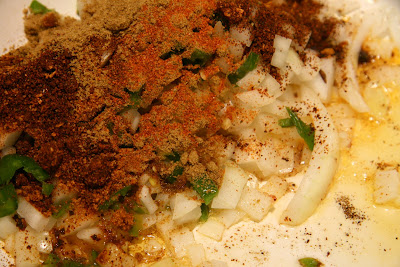 See the three different chili powders? Each had a distinctive flavor.

- I mixed 3 different kinds of chili powder - pretty much the same ones that I'd used for Bobby Flay's red chili:

- My pantry search netted tomato sauce but no puree. The internet informed me the two products are similar in texture and close to interchangeable, so interchange I did. Since I only had 3/4 of the meat, I reduced the tomato sauce a little bit.

- A full recipe would have filled my 4 quart slow cooker - maybe too full.

We found this to be a great basic red chili, and it will become my chili for everyday and for chili-type entertaining. It doesn't save any dishes, or really any prep time over most other chili recipes, but the slow cooker really does meld the flavors and smooth the textures, while providing an easy way to set up the food in advance and have a fabulous hot meal later.

Winner of the Throwdown:

The crock pot chili soundly whupped Bobby Flay's chili. It was easier, used far fewer dishes, and still benefited from the variety of flavors found in the three chili powders. Someday I'll grind all my own chiles, but until that time, this chili recipe will be a fantastic way to use up all that specialty chili powder that I bought! It's good with or without a corn muffin...
Posted by Nancy/n.o.e at 11:57 PM

How fun that you did your own throwdown! I love comparing different recipes for the same dish and figuring out which one is better. They both look yummy!
I am interested to hear about your surprises with the cake. I made it twice yesterday and actually got an email from Dorie after I inquired about my cakes sinking a bit. interesting stuff!

Oh, I love a good chili throwdown! Bring me some popcorn (tortilla chips?). I kind of feel like the whole purpose of chili is defeated when you have to run around town looking for ingredients. I am definitely going to have to start keeping my eye out for specialty chili powders when I am at the store. I am going to make the ATK chili for sure. You had me at "crock pot."

Loved that post!! The first time I made chili, I confused chili powder with cumin and let's just say everyone burnt their tongue! I CI's chili before and it was delicious. Looking forward to future throwdowns, Nancy!

Hey - thanks for stopping by. Now tell me what I'm up against with the berry cake. Cathy confided to me that you had already made it??? Should I be scared?

Oh I love it when Bobby gets it handed to him. His secret ingredients are ALWAYS honey and chipotle. They're in everything. And he has the weirdest little lisp, which makes it hard for me to concentrate on what he's cooking.

But I love this. Jon and I have been having regular conversations about what to make for our next bowl of chili. Your post definitely helps! Thank you!

I loved your throwdown!! If you went all over town and couldn't find these special chile powders how is the average person supposed to make these recipes? That's what I was thinking. I am a big Bobby Flay fan and he is always gracious when he loses, and I'm sure he would be this time, too.

Love the throwdown!
I thought for sure Bobby would win, what a surprise that his came up lacking. He usually has good, big flavour.
I am prejudiced against ATK after they proclaimed their recipes perfect and stated that they didn't want bloggers adapting them...
But it is good that you found a keeper - and I am glad you made adaptations - hee, hee!
I am with you, beans are essential in chili!

Love the throwdown! I have a "go-to" turkey chili, a Cincinnati chili, and a zillion ingredient cook all day chili. I'll have to look at the crock pot recipe again.

How fun! I've never made chili before, but have been wanting to. We don't eat beef, but the concepts are still the same.

ATK usually does a pretty good job on these types of recipes, I've always liked it in the past. I really like Jamie Oliver's chili too. Its so cold today, what I wouldn't give for some chili!

What a cute post! I love that show - especially when he gets whupped! Both chilis look good, though, so without your own test kitchen, it would be a tough call.

Great post - I LOVE it when people do this and do a lot of the work for me!

I'm glad to hear Bobby's lost. I don't like his shows! A+ to you for going to all the effort to track down all those spices!! You must have a huge pantry!

I always thought his throwdown show was unfair. He has his two kitchen experts and often a guest chef to help him. He should do it himself!

I love simple recipes, especially ones that are fast to put together but then can gently cook away while I can do other things!

What yumsome-looking food and pretty dogs and daughters! What breed are the dogs or are they happy mixes? :)

Sometimes it's the simplest recipes that are hardest to come by. Sounds like both chilis were made with a lot of love, and I'm glad the easier one ended up being the tastiest :D...gotta love when that happens.

Love the throwdown ideas. Looks like lots of work. I just found out my husband doesn't really care for chili (over 11 years married), which stinks, because I really like it. Thank goodness I'm the cook around here and if I feel like chili, we eat chili! ;)