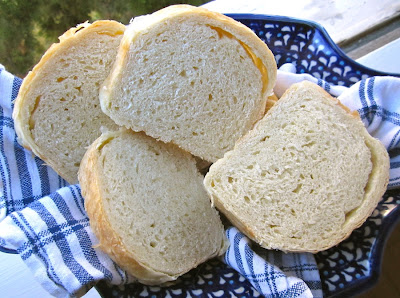 It's been a while since I posted a sandwich bread on this blog, as usually all the yeasted goodies are posted on my bread blog.  But White Bread is the first choice in the all new Tuesdays With Dorie baking group, wherein we begin our journey through Dorie Greenspan's book Baking With Julia.

That's right, there will be more Dorie on Tuesdays!  I thought long and hard about whether to join the new group. I hemmed and hawed. I shifted my weight from one foot to the other. I waffled.  And then, I decided to give it a try; we'll see how it goes.

The recipes in the new book tend to be more complex than Dorie's recipes in the previous TWD book, Baking From My Home to Yours, were so the group is only going to bake 2 recipes per month.  I am aiming to bake at least one of the selections each month, posting on the appropriate Tuesday.  For the next several months I'll also be catching up on all of the recipes that I missed from the early days of the first TWD, posting on close to the date when they were originally assigned for the TWD group four years ago.

The book for this round of TWD, Baking With Julia is based on the Master Chefs television series that aired back in the 1990s.  Julia Child was the host of the series, and 26 bakers were guests on the show, baking with Julia Child in her kitchen.   Dorie Greenspan made it all into this book.  Of course the book's recipes are not Dorie's, or even Julia's, and it's going to be fun to try recipes from many different bakers in the course of this new version of TWD. 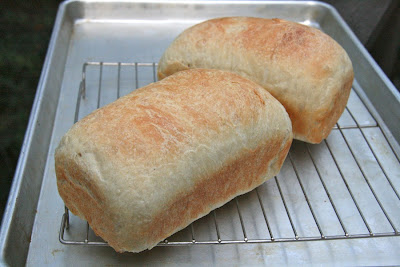 -  The bread recipe is a contribution by baker Craig Kominiak.  If you want to bake this bread, you can find the recipe on Jules' blog, here, as she is one of our hosts this week, along with Laurie of Slush.  Or you could buy the book and bake along with the group; the last I heard there are 300+ blogs from almost every state and from countries around the globe.

-  I like a sturdy crumb on my bread, so I used bread flour.

-  My stand mixer has been ailing for a couple of years (I'm hoping that 2012 will be the year of Operation Repair Kitchen Aid.)  I've learned to avoid kneading dough with a mixer but to knead by hand, which I enjoy, or use my food processor instead.  I learned the food processor method from Rose Levy Beranbaum and I like it so much that even when my stand mixer is fixed I won't go back to making bread dough with it.  When using a food processor, the ingredients are mixed in a slightly different order but the dough turns out much more quickly and I think just as beautifully.  So, using this method, I first put dry ingredients together in my food processor, including the instant yeast and pulsed several times to mix the ingredients together.  Than I added the water and finally the salt, pulsing until the dough pulled together and the gluten began to develop.  Then I turned the dough onto the counter and kneaded it by hand, adding softened butter as I kneaded, although I could have done this step in the food processor also.

-  My dough was very slow on both rises: it took 2 hours for first rise and 1.5 hours for the loaves to rise after they were formed.  I just told myself that the dough was developing more flavor!

-  I made half recipe of the bread dough, which I split and baked in two medium-ish metal pans of slightly different sizes.  Did you know that if you save the papers from sticks of butter they are great for greasing baking pans?  This time I also used the papers to line the bottoms of the pans to make sure the loaves would release.

We enjoyed the bread toasted with butter - it has a sturdy crumb and the browned crust was a bit chewy in a good artisan-white-bread way.  While this bread doesn't unseat our very favorite white bread, it is one that we savored down to the very last crumb.

If you want to see a passel of other white bread posts, head over here and start clicking on links to the other bakers in the all-new Tuesdays With Dorie!

Glad to meet you here again!

Your loaves look picture perfect! I'm going to have to try your FP bread method soon because I would love to save some time. It seems like several of us have the same favorite white bread recipe, and reading about it is making me hungry for some. (BTW, I'm pretty sure it's going to be amnesia for the MS wedding cake, so feel free to borrow, er, contract any of the others).

My KitchenAid is 22 years old, and still going strong, but I worried over it like a new mommy when it was working on this dough. I'd love to try your food processor method. I think I agree that this isn't the white bread to end all white breads, but it was fun to make, and it's especially nice to be baking with you again. :)

You're definitely right about the DL love this week. =) It's not that this bread is bad, but we've all been spoiled by all the bread baking we've done. I'm glad that you're going to bake along with the new group.

Hemmed and Hawed to say the least...lol. I feel like it is still precariously up in the air. Happy you are here because you are the one who keeps us all on track with TWD and getting it done in a timely manner. Where would we be without you? Your bread looks great, inside and out, and it was fun baking it and will be fun baking everything else together (or those things you can fit in...like the chocolate tart we are making this afternoon). Nice job, nice review, nice shout out to you-know-who, our favorite white bread maker/recipe creator.

Totally agree: good bread, but not as good as the good-ol' milk loaf. So happy to be joining you on the TWD journey this time around! :)

I remember you were unsure about joining the group! I bet you will be glad you are going round two with everyone. And this bread was a great way to start, right? Delicious. Yours is beautiful of course!!

I'm glad you decided to join. :) Your loaves look fantastic.

The loaves look great and I'll have to try the bread you're recomending too!!

Your blog is wonderful. I've spent a lovely break checking out all the breads you've baked. I'll be back to try some as my skills increase. This was the first loaf I've ever made. I'm a Nancy too. I wonder how many there are. I was never in a class until college that there weren't at least two if not three.

LOL at Operation Repair Kitchen Aid. I'm impressed how long you've survived without it! The bread looks wonderful - I won't be joining you guys but I might need to make this one for Shane.

So glad you decided to join back up! :) Your bread looks perfect even if it did take a very long time to rise. Thanks for the great tips for the future! :)

Beautiful Nancy! I will have to try your fav bread....this was good but glad I did a cinnamon version too! So glad you are doubling up on the Dorie's! It wouldn't be the same without you. That said....I'm behind on my TWD makeups!!,

Nancy, I'm totally with you on the hemming and hawing...I didn't sign up until the night before the first post! But I love the book and feel like one or two recipes a month is do-able. Plus it will force me to give my blog some attention! I'm still slowly-but-surely working my way thru BBA, too. I feel the same as you about this bread, good but not my fav. Will have to give the milk loaf a try!

Great post. Will be checking out your bread blog.