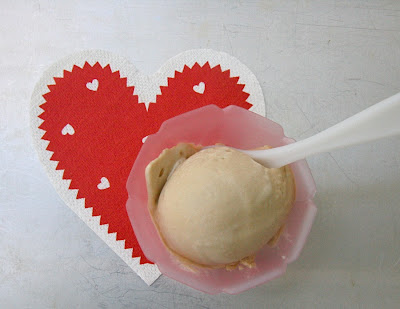 James Beard was a seminal figure in the coming-of-age of American food in the middle of the last century. I've heard of his many cookbooks - Beard on Bread, Beard on Food, James Beard's American Cookery, and many more - but I don't own any of them, and the only James Beard recipe I've made was his sweet potato dinner roll (which is my very favorite dinner roll). Determined to explore his cooking, I've been perusing the James Beard Foundation website, which has an extensive selection of Beard's recipes online. I bookmarked several, but the one that reached out and grabbed me was his recipe for Cognac & Coffee Ice Cream.
If there is one sweet my husband truly loves, it's ice cream, and I try to have some in the freezer at all times. He never tires of it, so I figured a special ice cream recipe would be a fun Valentine's day treat to make for him.

- You can find the James Beard recipe here.

- Seriously, you've gotta love this recipe's simple directions for making ice cream base: "combine all ingredients and stir!" I wasn't sure that the sugar or the instant coffee would dissolve when mixed with a bunch of cream from the fridge.

- I made half a recipe of this ice cream because a full recipe calls for a cup of cognac and that's an awful lot of Henne$$y to use in one recipe!

- I'm pretty used to ice cream recipes that call for the sugar to be combined with some of the liquid and heated, and that's what I did here. I warmed 1 cup of the cream with the sugar and coffee until they both dissolved. Then I added this heated mixture to the rest of the cream in an ice bath. I used half and half in place of the recipe's light cream.

- Alcohol is a useful addition to homemade ice cream because it keeps the ice cream from freezing rock hard. In cases where you don't want the flavor to stand out, vodka is a good choice. For fruit-based ice creams, David Lebovitz, my ice cream guru, recommends kirsch.

- When it came time to add the cognac, I got cold feet. David Lebovitz's rule of thumb is that 3 tablespoons is about the upper limit of alcohol to use for each quart of ice cream. And yet this recipe calls for a whopping half cup, which comes out to 4 ounces - 8 tablespoons! - for less than a quart of ice cream! As I was pouring the cognac into the ice cream base, it was looking like a ton of cognac. I didn't want the ice cream to be a slushy, non-freezing mess, so I stopped at 3 ounces (6 tablespoons) for the half recipe.- Luckily the ice cream froze despite the large amount of alcohol, but once out of the freezer it melted at lightning speed. I seriously doubt that the ice cream would have frozen if it had the full amount of cognac.

I'm used to ice cream with alcohol; I routinely add rum to our everyday vanilla ice cream and I've made an assortment of alcohol-flavored ice creams (for example, here and here) I've also churned several different coffee ice creams, but I've never combined the coffee with alcohol in ice cream, so I was curious to sample Beard's recipe. The taste of the cognac was front and center - this ice cream is quite boozy - but the coffee provided a nice supporting flavor. In fact, the ice cream was a little bit like a frozen Irish coffee.

My husband enjoyed this ice cream flavor quite a bit. When I told him he couldn't polish off the carton of ice cream quite yet because I needed to photograph it, his comment was, "Why? all ice cream looks the same." I have to admit that he has a point, especially given all the tan and white ice creams that we eat! Luckily I could placate him with cookies and saved the ice cream to photograph the next day in daylight.

A special ice cream seems to be the way to go to make your Valentine's Day special:D

I'm a huge ice cream lover too and this one looks perfect to me. Hope you're having a sweet VDay :)

Happy Valentines Day. Funny, we have all read/heard so much about James Beard and I don't have one of his books and never made one of his recipes either.

I had to laugh at your husband's comment. =) I hate trying to take attractive pictures of ice cream.