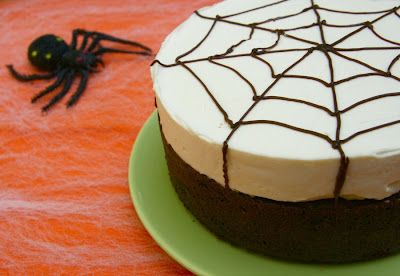 One of the best parts about being in the Tuesdays with Dorie baking group is that in most months the assignments tend to even out. In October we've had fairly easy recipes (pudding, muffins, biscuits) and now a fairly spectacular chocolate torte. Even with a month's notice, I had a hard time figuring out the proper "torte" event at which I could pull out this dessert, so in the end I baked a half recipe and placed the torte in a state of suspended animation in the freezer. 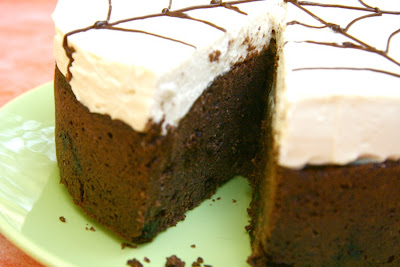 - I made 1/2 recipe in deep 6" springform. It's a good thing my pan is very deep - 3" - because I needed all of that depth to fit the cake and the topping layers.

- This was one of those dirty-dish-generating recipes; every step seemed to require a new bowl, pan, or piece of equipment.

- I bought a yummy jar of cherry stuff especially for this recipe, then realized it was jam not preserves. I used it anyway and it didn't seem to matter. For this recipe, dried sour cherries are soaked, cooked, doused with kirsch and flambeed, then simmered with cherry preserves. By the time they were added to the cake batter, the cherries smelled delicious.

- The cake layer tood a good long time to bake. I clung to Dorie's doneness test and left it in the oven until it had moist crumbs that stuck to a testing knife.

- For the mousse layer I combined the appropriate amount of cream cheese, mascarpone, and cream, taking care not to over-mix. The recipe says to "pour" the mousse, but mine was "spreadable" rather than "pourable" so I spooned it in the pan and spread it along the top of the cake, smoothing with an offset palette knife.

- The recipe gives instructions for an optional decorating technique, where cherry preserves are pureed then piped on top of the mousse and formed into beautiful chevron shapes with a toothpick. I was very tempted, but Dorie is specific that preserves, not jam, must be used. I wasn't willing to take my chances with the jar of jam that I had, so I came up with an alternative decorating scheme. I thawed a bit of ganache from the freezer and piped it with the cut corner of a sandwich bag. This was one time where my spidery piping skills were actually appropriate! (Honestly, though, I really need to practice piping...)

- I cut and tasted one slice, then put a parchment collar around the torte and bundled it back into the springform pan then into a plastic bag for protection in the freezer. Fingers crossed that the mousse survives being frozen. 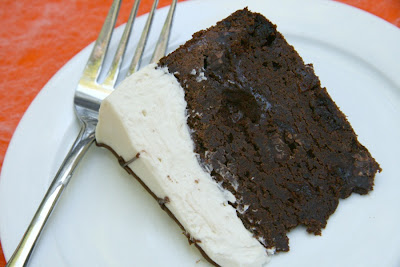 This was a great torte! The brownie layer was dense and fudgy (after an overnight in the fridge) with just a hint of deep cherry flavor. And the mascarpone mousse? Mine wasn't very mousse-y, but I loved it the way it was. Not sweet, just a creamy counterpoint to the dark chocolate of the cake layer.

I'm not usually a fan of chocolate + cherries, but I loved the combination in this torte. The cherries were quite subtle and complemented the chocolate beautifully. In fact, next time I'd increase the cherries by 50% and eliminate the chopped chocolate chunks (which I found a bit distracting).

I plan to serve this torte to my book group next Thursday. We'll see how it survived the freezer. [Update: I thawed the torte in the fridge and it came out perfectly! Everyone in book club loved it; in fact it is their second-favorite TWD chocolate dessert, after the chocolate caramel tart!]
Thanks to April of Short + Rose for selecting this delicious torte. You can find the recipe on April's post or on pages 284-285 of Dorie Greenspan's book, Baking: From My Home to Yours.
Posted by Nancy/n.o.e at 12:11 AM

I love it !! I need to practice my skills too (and I used jam that clogged the hole !) but I love the cake too !! Ciao !

Yours looks great! I made a half-batch, too, but used a short, fluted tart pan. The brownies rose up twice as high as the edge of the pan, but somehow managed to maintain their shape. A bit of luck!

Great idea, that spider web!!! Wish I'd thought of that!

I love the spiderweb. So creative and cute. I got lazy and just dusted mine with some cocoa. I hope it survives the freezer and your book club enjoys it.

Nancy, your torte looks amazing! The web is spectacular. I loved this recipe also. Am sure it will go over very well at your book club!

I'm actually not a fan of the chocolate/fruit combination either, so I was pleasantly surprised at how much I liked this.

Your web design is perfect - and how appropriate!

Just gorgeous! Crossing fingers it survives the deep freeze - what a perfect dessert to pull out some night!

Im glad you liked it.

I love the spiderweb topping, very appropriate. I'm curious to see how the mousse faired in the freezer. Although this was a big hit with my guests, I don't think I will make it again. Too labor intensive and too many ingredients.

Your torte looks so cute with the spiderweb design.

I love how you decorated this. Your cake looks so nice and moist. The bookclub members are so lucky they get to eat this!

Gorgeous torte, Nancy! The spiderweb is awesome. I would never think to freeze this one, I hope your book group enjoys it.

Gorgeous--love your spider web--I think your piping skills are great!

It a great idea, I love the spider.

Looks great! I hope it survives and everyone enjoys it next week.

Looks beautiful and perfect! Wish I'd have had a reason to make it as it was, but cherry/chocolate would not have gotten eaten here, so I put my own spin on them. The brownie is great!

How beautifully spooky! I accidently melted all the chocolate rather than saving some to mix in, so I am glad to hear you found the chocolate bits to be distracting.

So festive Nancy! Love the way you decorated your torte :) I sat this one out but I am intrigued. I'm not a huge fan of cherries but I might be able to deal with them in chocolate.

I always stick things in the freezer unsure if they'll emerge and still taste good...

Cool decorating. =) I really enjoyed this one, too, but haven't gotten it posted yet. I ended up using cranberries and raspberry jam, and it was very good. I hope the book club enjoys it.

Wow - so that's what a spider web should look like piped! I LOVE IT!! Your brownie torte turned out fantastic and I like the spider hanging out too! =)

Thanks for baking with me this week! I love, love, love the spiderweb on top, perfect!

Oh, that design on top is so clever and nice. I feel badly skipping this one, but it looks like a December type dessert to me, so I will have time to make and serve it sometime over the holidays. I always appreciate the opportunity to set food on fire while preparing you know and have it be a legitimate reason. I can tell from the wonderful photos you took of it all that the guys, who do love cherries and chocolate, will enjoy this. Great post and photos!

BOO! What an utterly fantastic topper!!! So perfect for the holiday! You amaze me at how much baking you can get done in a week... I have 2 frozen brownies in the freezer. One of these days.... they'll be "topped". I also like how there's more "brownie" vs "topping" - you've given me inspiration to finish this!

So cute! I love your decoration. I need to be less lazy and do the calculations to make halves and quarters.