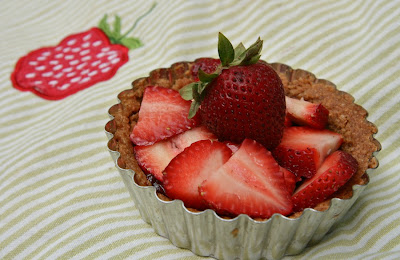 Several months ago, when I was in California, I came across some great strawberries.  I snapped them up and immediately baked up Dorie Greenspan's La Palette's Strawberry Tart from Baking From My Home to Yours.  The recipe has only three elements: tart crust, strawberry jam, and macerated fresh strawberries, and  I knew that each element had to shine.  The berries were amazing (so much so that I didn't even macerate), and I know that Dorie's tart crust is perfection.  To match the quality of the first two elements, I splurged on some beautiful French strawberry jam.

I baked up some little tartlet shells, assembled and photographed them.  I was months ahead of the June posting date! (I'm baking the recipes I missed from the first 7 months of the original Tuesdays With Dorie baking group, and posting on the corresponding date 4 years later.)

But then in May my MacBook hard drive (just over a year old) went to hard drive heaven and took my strawberry tart photos with it.  They were cute photos, too, darn it!

I knew I had to re-bake the tarts, and that finally happened this week.  The photos are from the new tartlets, which we enjoyed every bit as much as the first ones. 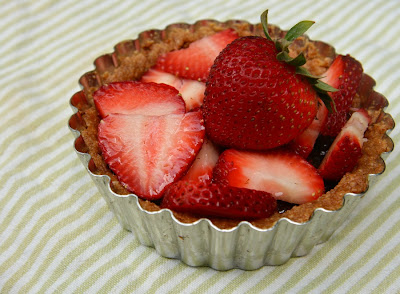 - Dorie herself posted the recipe in her column for Serious Eats.

-  The first time I baked the tart, I used Dorie's tart crust, which I've made many times before, and love!  The filling was French strawberry jam, and I used the fresh strawberries by themselves.  I didn't add sugar or liquor to them, and forgot the black pepper.

-  The second time I baked the tart, I make gluten-free tart shells using Alice Medrich's shortbread base found in her cookie book, Chewy Gooey Crispy Crunchy Melt-in-Your-Mouth Cookies.  For the crust's sweetnener, I used golden palm sugar rather than plain white sugar, which gave it a golden color and a caramelized flavor.  This time I was home in Georgia and the French jam was still in California.  Rather than buy more strawberry jam I decided to make small batch Strawberry Honey Thyme Jam.  The jam was easy to make and delicious in flavor.  I again left the strawberries plain, and again I forgot the black pepper (darn!)

-  The recipe is interesting because all of the elements are kept separate until the time that the tart is served.  When one big tart is made, the shell is sliced, then spread with the jam and the strawberries are piled on top.

-  I usually find that making mini tarts adversely changes the recipe's proportion of crust to filling but in this case, the tart is assembled after the crust is fully baked, and the jam and berries can be increased or decreased to taste.  In fact, the berries are supposed to spill over the crust.

The recipe sounds so unassuming, a few simple elements, no big deal, but let me tell you: This was a sleeper of a recipe! We loved these tarts. (Both versions!)  The juicy fresh strawberries played off of the sweet strawberry preserves, all in the context of a buttery, almost cookie-like crust.  It's a perfect summer make-ahead dessert, and can be varied with whatever berries happen to be in season.

This looks so pretty...one of my very favorite recipes from the book, and the one that forever pairs strawberries and black pepper here now...there is just something about it, when we skip it, it's like something is missing. Go figure. You are getting so close to completing the entire book!

With every recipe that you post, I think, I really need to make that again! This one is no exception. I love your mini tart. I'm sure it was great with both crust recipes; they're both so good.

Local strawberries are starting to look better now that the monsoon rains are over, too bad it is the tail end of the season.

Unassuming!! yes, a good way to describe this terrific little treat. Too bad you had to make it again!! ;)

Looks perfect. The little minis are always so cute.

Many thanks, La Palette