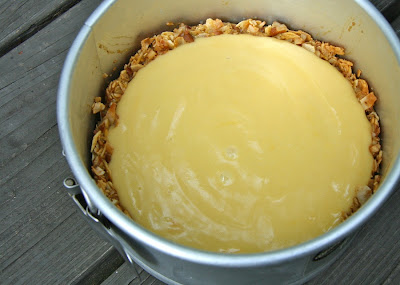 Well, it's time for another Tuesdays With Dorie adventure, featuring recipes from Dorie Greenspan's book, Baking From My Home to Yours.  The original TWD group baked all the recipes in the book, beginning the first Tuesday of 2008, and finishing on the final Tuesday of 2011.  I didn't join the group until July of 2008 so I'm baking the recipes that I missed.  This week it's a key lime pie that Dorie jazzes up with coconut elements, producing something she dubs "Florida Pie."

Lime and coconut are a classic flavor combination, one we've seen several times over the course of Tuesdays With Dorie.  [lime coconut cookies here, complete with " You Put the Lime in the Coconut" video(!), also lime coconut tea cake here]

-  You can find the recipe on the Florida pie post of the original host from 2008, Diane of Diane's Dishes.

-  This recipe has four elements: crust (Dorie calls for homemade or purchased graham cracker crust), coconut cream, key lime custard, and coconut meringue.  I made the middle two layers according to Dorie's recipe, and changed up the bottom and top layers.

- I made a full batch of the crust, coconut cream, and key lime custard

- I decided to make the pie into a tart, using a 6" spring-form pan.  The problem with this plan was that I didn't know how high to make the sides of the tart crust when I formed and blind baked it.  My crust ended up being pretty shallow so I couldn't fit very much of the filling layers. I used some of the extra filling to make a small tart and some ramekins.

- Instead of using a purchased graham cracker crust, I made a gluten free toasted coconut crust.  I've been experimenting with this crust, and I really like it with custard-type fillings.  The crust has large unsweetened coconut flakes, and they toasted in the oven as the crust baked. My spring-form pan leaked butter when the crust was baking but I didn't worry about that too much, and just made sure to set the pan on a plate once it came out of the oven.

-  Every time I make the crust it's a little different, but here's the basic recipe I've devised:

8 T butter
2 c/4 oz unsweetened coconut flakes (I use the big ones, chopping them a bit if necessary)
1/3 c (or less) sugar or palm sugar
1/3 c almond meal or ground almonds
1/3 - 1/2 c pecan pieces
1 egg
Melt the butter, then stir in the other ingredients.  Press into pie or tart pan. Bake at 375 degrees until browned and set, about 25 minutes.


- The recipe made a large quantity of the coconut cream layer, and I didn't end up using all of it.  Rather than sweetened coconut, I used shredded unsweetened coconut.

- For the lime layer, I used bottled key lime juice.  Luckily my buddy Leslie, of Lethally Delicious, who is a key lime snob, does permit the bottled stuff in a pinch.

- I did not make the meringue, instead I just piled on some unsweetened whipped cream.

This tart was a runaway hit at the barbecue - people were raving about the combination of the lime with the coconut crust.  Because I added the coconut crust, I think that the coconut cream layer was not as noticeable - or essential, even.  The key lime layer was amazing - tart and silky - a great contrast to the chewy toasted coconut in the crust.  I think the next time I bake this pie/tart, I'll skip the coconut cream layer and pile the key lime layer as deep as I can.  And to me the whipped cream was a perfect complement on the top.
Posted by Nancy/n.o.e at 11:25 PM

You do know I'm going to have that song in my head ALL day, now! :)

I love how you changed it up and made it even better. I will have to try that crust. sounds perfect for a pie or even a cheese cake.