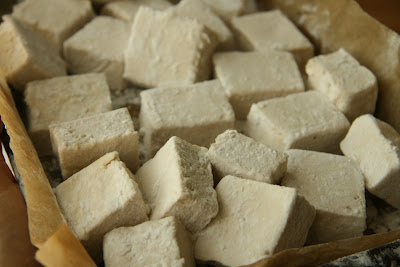 In my quest to finish all of the recipes in Dorie Greenspan's book  Baking: From My Home to Yours, I arrived at a recipe, Marshmallows, that, being egg-white-based, is humidity-sensitive.  It was rainy and damp for a good week around here, and I was foiled in my plan to make the marshmallows in time to post them last Tuesday.  But this week was gloriously dry and crisp Spring weather, just perfect for marshmallows, so I whipped up a (half) batch.

I've always liked marshmallows, although not so much in hot chocolate or in baked goods.  S'mores (marshmallow + graham cracker + chocolate) are good, but mostly I like to eat marshmallows plain.  And stale.  To me the best marshmallows are stiff but still chewy, almost a taffy consistency.  On the other end of the spectrum, the "marshmallows" in breakfast cereals such as Lucky Charms - little hard nuggets - are beyond the pale.  I was interested to see the texture of Dorie's marshmallows.

-  The recipe for marshmallows was chosen for the Tuesdays With Dorie group by Judy and you can find the recipe on her 2008 post. There is an omission in the book; one Tablespoon of sugar that is mentioned in the ingredient list but not in the instructions.  Dorie later cleared up the mystery:


I'm sorry about the mysterious 1 tablespoon sugar -- it was meant to be added to the egg whites once they started to thicken. The little bit of sugar shouldn't make a difference in the marshmallows, it's there to ever-so-slightly stabilize the egg whites and make it easier to beat them without overbeating.

-  I've never made marshmallows before, and there are recipes that don't involve egg whites, and recipes - such as Dorie's - that do.  The basic method for these marshmallows involves 3 elements: beaten egg whites (stiff but still glossy), gelatin (bloomed in cool water then heated until liquid), and sugar syrup (boiled without stirring until precisely 265 degrees).  The three components are prepared separately, and simultaneously(!), and then beaten together, producing a bowl of frothy, shiny, meringue, which is then spread out on a shallow pan to set.  I'm never confident about my sugar syrup into egg white skills, but it worked out well for me this time, although the whisk beater slung sugar syrup all over the bowl and onto the counter as I poured it into the beaten egg whites. 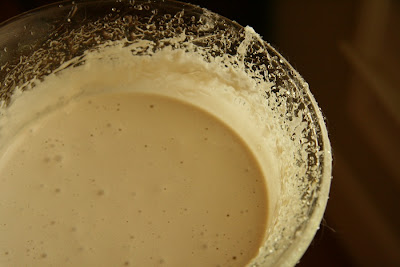 -  I made half a recipe, although I really wanted to make 2/3 recipe because of the amount of egg whites and open gelatin packets I had on hand.  But the math was a little daunting for me (did I really say that?) so I dropped back to the easier calculations for halving the recipe.

-  Dorie gives several flavoring options for the marshmallows, and a simple internet search will produce tons of creative flavor/color combinations for homemade marshmallows.  I decided to go with an almond flavor combination.  Almond: the little black dress of flavors.

-  To the basic recipe I added the following flavorings, based loosely on the flavor of this recipe from the Washington Post:
1/2 tsp espresso powder
1.5 tsp vanilla extract
3/4 tsp almond extract
1.5 tsp amaretto
I stirred all of these into the gelatin mixture before beating into the syrup/egg white combination.

-  My half recipe nearly filled a parchment-lined toaster-oven tray.

-  I used potato starch to coat the marshmallows to keep them from sticking, but, really, mine weren't all that sticky.  I was able to use the same knife to cut the whole bunch, without having to wash down the blade in the middle of cutting.

I found the marshmallows to be quite tender, not-too-sweet, not at all chewy, and quite subtle (but noticeable) in the almond department.  So, while they hardly resembled the stale stiffness of my usual marshmallow ideal, they were lovely nonetheless.  I'm looking forward to sharing them with my book group later this week (and I'm leaving the box uncovered in the hopes that they might get the littlest bit stale!)
Posted by Nancy/n.o.e at 6:09 PM

Oh, I love the flavoring you used! I've always been too nervous to try flavoring my marshmallows, but yours look great!

I made marshmallows to give this past Christmas and they were a big hit. I used Alton Brown's recipe (all gelatin) but I waffled between that recipe and Dorie's. I might need to go back and try this recipe as well. I love your decision to go with almond flavor, and I had to chuckle: almond really is the LBD of flavors!

I've been wanting to give this recipe another go. I made them a long time ago and failed miserably. Your marshmallows look great!

Those look great...and I would really like to taste the almond flavor of them. Mark is like you, he loves marshmallows stale...he unwraps the Peeps every year and lets them sit out a bit to get stale on purpose. Go figure. Anyway, these look great and you are making great progress on finishing that book!

I had to laugh at Kayte's comments--the only way I'll eat Peeps is if they're stale. =) I definitely prefer my marshmallows to be quite chewy. The couple of recipes I've tried have yielded softer marshmallows than I prefer, but the girls are more than happy to eat my share. =)

I wish I had thought of Almond flavoring. I bet they were very tasty. YOurs turned out beautifully - nice and thick. Way to go, Nancy!!