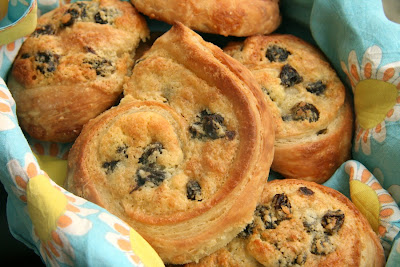 In the breakfast section of her book, Baking: From My Home to Yours, Dorie Greenspan has a recipe for basic brioche dough which makes Golden Brioche Loaves and also forms the base for her Brioche Raisin Snails, which were originally baked by the Tuesdays With Dorie baking group four years ago today.  Thus the raisin snail recipe is this week's recipe in my TWD catch-up project.  (The brioche dough is also the base for Pecan Sticky Buns, which will be coming up in a few weeks' time)

As it worked out, although the raisin snails and the pecan sticky buns were chosen in the first 6 months of TWD, we baked the plain(er) Golden Brioche Loaves towards the end of TWD, just a few months ago, and I saved enough dough in my freezer to make the snails that I had not yet baked (and the upcoming sticky buns too!)

- [edited to add:
The recipe for these pastries is on Laurie's post here.]

-  There are four elements to the raisin snails recipe: brioche dough topped with pastry cream and flambeed rum raisins then sprinkled with cinnamon sugar.  These are all rolled together, sliced into individual coils (resembling snail shells), left to rise at room temperature, then baked until golden brown.

-  When I paged to the back of the book to find the pastry cream recipe, I saw Dorie's recipe for almond cream and began to formulate a plan to go rogue and use almond cream rather than pastry cream in my snails.  Then I saw in the almond cream recipe that Dorie actually suggests that would be a good filling for her brioche snails.  So I even had Dorie's permission to make the switch and I feel so much less guilty!

-  I added almond extract instead of vanilla or rum to the almond cream to intensify the almond quotient.

- According to the recipe, right before rolling up the dough, it's time to sprinkle with cinnamon + white sugar.  My plan was to sprinkle with brown sugar and leave out the cinnamon so it wouldn't fight with the almond direction I was taking. At the appropriate time I was so busy rolling the dough that I forgot about the sugar step entirely.

-  My rolls didn't rise much before baking and they didn't rise much in the oven either.  They spread horizontally but not so much in height.  As it baked the almond cream puffed but it also oozed onto the silicone baking sheet liner and browned.  When I removed the rolls from the pan, it was an easy matter to break off the browned almond cream. 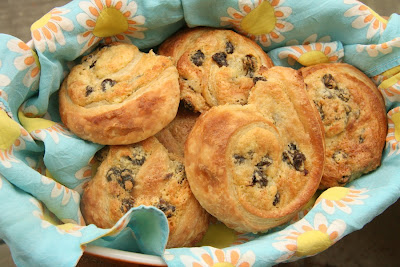 Things these snails were: buttery, yeasty, almond-y, raisiny.  Things the snails were not: rummy, sugary.  We enjoyed them for breakfast, a mid-afternoon snack, and for dessert with vanilla ice cream.  They were a little involved to make, so it's not likely that they will go into any regular rotation in my kitchen, but they were definitely delicious.

I remember buying a bagful of these in the very very fancy food hall at one of the Paris department stores ... yours are tres jolie!

Love your flavor variation. This is my first and favorite Dorie recipe of all time (I usually make mine with heath pieces or chopped dark chocolate, oh my!)

I still haven't made this recipe! The sticky buns were one of my first yeast experiments and they were a big hit, but like you said, this recipe is definitely a bit time consuming so I haven't rushed to try it. One of these days, and I'll probably take a cue from you with the flavor combo, sounds awesome!

I've been wanting to make these again. You've inspired me!

Okay, I skipped the snails for now with the catch-up. Just ran out of time. But will do them. I like your changes.

These look yummy...and I would have made them more sinful by adding a drizzle of icing. Oh, yes, I would have...but then I would cover up some of the prettiness that yours have.