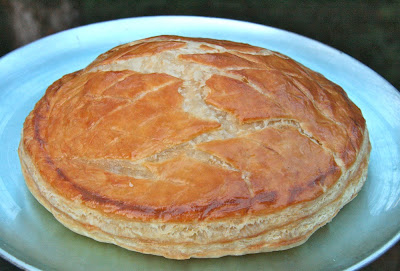 January 6, the twelfth day after Christmas, is the feast day of the Epiphany, which in Western Christian tradition commemorates the visit of the Three Kings to the infant Jesus in Bethlehem. I have always loved celebrating Epiphany. When my girls were small, we would all dress up in finery for our Epiphany dinner and I decorated the table with scattered glittering "jewels" and candles in golden crown-shaped holders. Based on some holiday books, I baked a cake or cupcakes with one piece of colorful candy tucked inside; the person lucky enough to find that candy would be crowned with a fancy paper crown and be the monarch for the rest of the day.

I'd never really heard of any specific traditional type of cake, though, so I was excited to see a post on Nick Malgieri's blog last January for a Galette des Rois, or traditional King Cake from France. I promised myself that I'd try it the next time Epiphany rolled around. Last week got a little busy, however, and I missed baking the galette for the actual date of Epiphany. Luckily, from what I gather from French sources, the Galette des Rois Season lasts through most of the month of January, so it wasn't too late to enjoy the galette when I baked it on Sunday.

According to French custom the galette is typically baked with a fève, a dried bean or trinket, inside. The person who finds the fève in his or his the piece of galette receives a paper crown and becomes king or queen for the day, and in some circles, has to provide the cake for the next Epiphany celebration. Apparently the French bakeries have gotten quite elaborate these days and the fèves are often lovely little porcelain figurines. 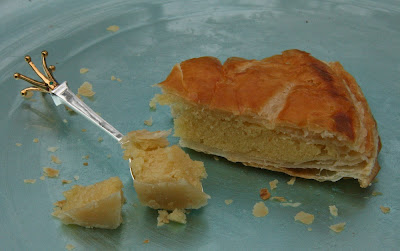 - For my first galette des rois I followed the Nick Malgieri recipe.

- Instead of attempting homemade puff pastry (maybe some day!) I used the duFour brand of store-bought all-butter puff pastry. This comes in 14 oz packages, just over half the size of the 1.5 pounds of puff pastry called for in the recipe. I cut the sheet of puff pastry in half, rolled each half into a square, and cut circles approximately 9 inches in diameter from each square. I made 2/3 recipe of the filling (very easy math, and it used half a can of almond paste - I froze the other half for a future recipe) and had a bit left over after filling the galette.

- My fève was a dried cherry.

- This galette had a traditional almond cream filling flavored with vanilla and kirsch. I reduced the amount of sugar in the filling by just a bit.

- Next time I'll be more careful when scoring the puff pastry and make sure that the knife cuts to an even depth in the pastry so that the cuts will open in a regular pattern as the galette bakes. This, my first galette was a lovely golden brown and it was beautiful to me despite the random way the scoring turned out!

- Dorie Greenspan's latest blog post talks about glaettes des rois and other types of galettes enjoyed by the French.

- Some pretty -and apparently tasty - galettes des rois from Paris bakeries can be found here.

- A step-by-step guide to homemade galette des rois was posted by Clotilde on her beautiful blog Chocolate and Zucchini. I didn't find her post until after I had baked my galette but I will definitely use it as a guide the next time I bake this treat, as it contains some fantastic tips for forming and baking the galette.

The galette presents a simple - and very delicious - combination of flavors, buttery crisp crust and creamy almond filling. I had fun baking this galette des rois, sampling it, and sharing it with a few neighbor families. The galette des rois is destined to become an Epiphany (or at least January) tradition in my kitchen.
Posted by Nancy/n.o.e at 12:32 AM

Should have guessed this. Didn't you mention it earlier in the week? It is quite lovely. What a fun time for the girls.

I love any holiday that can be celebrated with wonderful food!

Gorgeous! If you are going to make this a tradition each year, let me know in plenty of time next year and I will make it with you as it looks just wonderful and a nice way to celebrate the Epiphany.

I always associate Epiphany with visiting my mom's parents at Christmas. They always had their nativity scene under the tree, in the front. On Christmas Day, the baby appeared in the manger, and the three wise men (plus a camel) would be placed on the tree skirt behind the tree. Each day we would take turns jumping the one in back to the front of the line as they traveled along the edge of the tree skirt to arrive at the front in time for Epiphany. =)