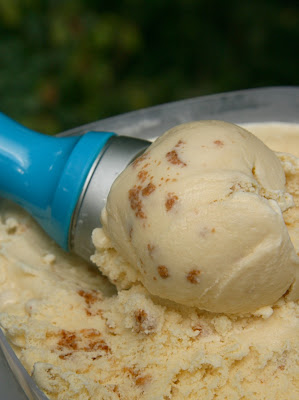 In our house ice cream is popular in every season, but I realize that not everyone enjoys eating the cold stuff year-round (Except, have you ever noticed how popular ice cream is in very cold countries in very cold times of year? I think they might be onto something!) For those slightly-less-diehard ice cream eaters, the recent heat wave in many parts of the US has ushered in the churning season. So now I can share a delicious ice cream flavor with you!

I'm always on the lookout for new ice cream flavors to try. When I saw this recipe from The Times (London) Online, which calls for crushed amaretti cookies and amaretto liqueur, both of which I happened to have in the pantry, I set forth to make it posthaste.

- I've included the recipe for this ice cream below.

- I prefer creamy to sugary in my ice cream, and I nearly always reduce the amount of sugar in ice cream recipes.

This was a wonderfully almondy, slightly boozy ice cream with added crunch and flavor from the crushed cookies that were churned into the ice cream base.

Fittingly, in this post with a British ice cream recipe, let me share this youtube video of the world's first amphibious ice cream truck, developed in the UK by Cadbury's:

Amaretto Ice Cream
adapted from a recipe by Lucas Hollweg, in The Times Online

Heat the milk and sugar in a medium pan over medium heat until hot and the sugar is dissolved.

In a separate bowl, beat the egg yolks with a whisk until lightened. While whisking continuously, pour the hot milk mixture into the egg yolks in a steady stream. Pour back into the saucepan and heat until thickened enough to coat the back of a spoon. The custard should be about 170 F degrees.

Remove custard from the heat and pour into a bowl set in an ice water bath. Stir until cooled, then stir in the amaretto.

Chill in the refrigerator for several hours or overnight. Once cold, stir in the cream, then churn in an ice-cream machine or still-freeze.

When the mixture is nearly firm, break the amaretti biscuits into pieces about the size of petits pois and stir in until evenly distributed.

After churning, scrape into a container, cover and freeze for 2 hours until firm enough to scoop. The alcohol should mean it's scoopable straight from the freezer; if not, let it soften for 10 minutes in the fridge before serving.
Posted by Nancy/n.o.e at 8:38 AM

That looks delicious...must try this one, probably over the 4th of July would be great so I can share it with company! Love the truck.

oh, this sounds fabulous. i love amaretto! i'll be making this once I'm dairytastic again:)

I need the mobile ice cream boat to come to my beach asap! Great post.